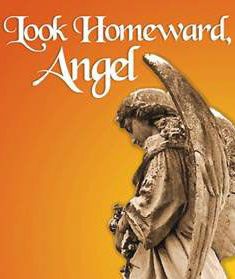 “Look Homeward, Angel” is an acclaimed Pulitzer Prize-winning stage play by the playwright Ketti Frings. Set in 1916, the play is based on Thomas Wolfe’s largely autobiographical novel of the same title and traces the coming of age of Eugene Gant in the small town of Altamont, North Carolina.
Eliza, his mother, runs “Dixieland,” a seedy boarding house. Growing up in a home full of eccentric travelers, Eugene struggles to discover the world that lies beyond his mother’s boarding house and the grasp of his turbulent family.
Matriarch Eliza (Linda Jones), is a woman obsessed with money and control, who spends much of her time bullying her hardworking daughter Helen (Sarah Dover), sickly son Ben (Keaton Brower) and 17-year-old Eugene (Austin Young), who dreams of escaping to attend college.
In addition, while it’s clear that Eliza does love her kids, they also rightly feel she puts the needs of her boarders ahead of theirs, making them cater to the guests and using them as glorified servants.
Still, even Eliza can be rude to the paying customers who don’t follow her rules, notably the married, older Mrs. Pert (Shakeisha Gray), who is romantically involved with Ben and brings forbidden alcohol into the house.
She is, however, subdued when it comes to visitor Laura James (Savannah Deal) once she realizes that Eugene has fallen for her and is considering giving up his college plans to marry her.
The only person Eliza shows consistent kindness to is her brother, Will Pentland (Neal Brower), a realtor who helps her buy and sell various properties.
Eliza’s most tempestuous relationship is with her often drunk and unhappy husband W.O. (Philip Shore) who is frustrated that he has never been able to finish a particular marble statue of an angel.
This production, directed by Jim Epperson, focuses on the Gant family and their battle against the hardships of a stagnant life. Seemingly always at odds with each other, their struggles are relatable to anyone who has been in a rut they are unable to get out of.
Everyone has experienced the inability to move forward or to fight against the deterioration of the person they used to be.
PPT’s production of “Look Homeward, Angel,” with a fantastic set designed by Allen Jones, is filled with interesting moments as the audience sees the drama unfold and characters collide.
Thomas Wolfe was a short-lived American novelist of the 20th century who is famous for his eloquent use of poetic prose and his keen sense of observation. A movie about Wolfe and his complex relationship with renowned editor Max Perkins is currently in production.
The movie, set in Wolfe’s childhood home of Asheville, will star Jude Law, Collin Firth and Nicole Kidman.
Ketti Frings won the Pulitzer Prize for Drama and the New York Drama Critics’ Circle Award for her stage adaption of the novel.
The production also received seven Tony Award nominations including Best Play.

“…one of those delicious period pieces like “Picnic” and “Our Town” that home in on the true nature of American life…” Chicago Sun-Times
“…intensely moving and funny…you can see yourself, your family and community, your own troubled loved ones…” Chicago Reader

St. Thomas Players’ second production this summer is quite different from its first, “Driving Miss Daisy,” yet, as director Jennifer... read more