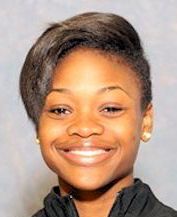 Annakay Edwards, former Miss Livingstone College and a 2014 honors graduate, has been nominated for the 2014 NCAA Woman of the Year, CIAA officials recently announced.
Should she capture the award, Edwards, a four-year letterman on the women’s track team, would become the first student-athlete in school history to win it.
Annakay graduated with a 3.8 GPA on May 3. She won the team’s highest GPA award each of her four years on the squad.
The Woman of the Year Award honors those graduating female student-athletes who have made an impact throughout their careers in academics, athletics, service and leadership. Edwards was one of 75 nominees chosen from Division II, joining Johnson C. Smith’s Danielle Williams as the two female student-athletes representing the Central Intercollegiate Athletic Association. Other nominees competed at Division I and Division III institutions.
The Top 30 of those 446 athletes chosen by the National Collegiate Athletic Association selection committee will be honored, and the 2014 NCAA Woman of the Year will be announced at the annual ceremony in Indianapolis on Oct. 19.
Aside from having stellar grades and representing Livingstone as its queen, Annakay broke several records in track and field at Livingstone and was among dozens of students who in 2013 built a Habitat house for a Rowan County woman and her daughter.
“I am not at all surprised that Annakay has been nominated for such a high honor,” said Livingstone College President Dr. Jimmy R. Jenkins, Sr. “Ms. Edwards demonstrated nothing but excellence in academics, true sportsmanship on the playing field and high moral character the entire time she attended Livingstone. Likewise, she performed her duties as Miss Livingstone College with beauty and grace, and she always tried to lead by example.
“We certainly hope she will be chosen as the NCAA Woman of the Year but even if not, we are extremely proud of the way she continues to represent Livingstone College.”
Edwards, a native of St. Andrew, Jamaica, came to Livingstone on a track scholarship and credits the school with helping her overcome shyness. She was accepted into The American University of Antigua College of Medicine, and during the summer of 2013 participated in a medical education development program sponsored by The University of North Carolina at Chapel Hill.
The rigorous program was designed to mimic a medical school curriculum for aspiring doctors and dentists.