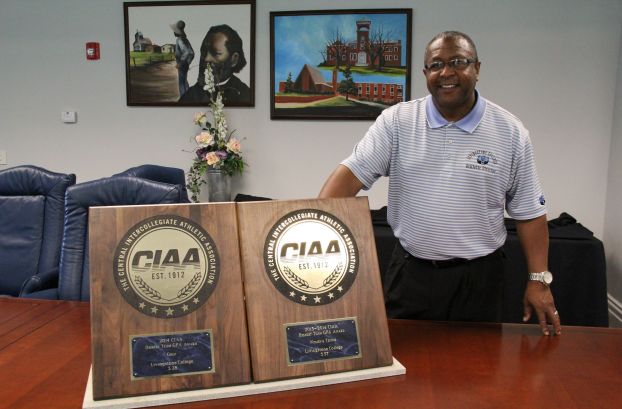 Livingstone student-athletes are making the grade

At a time when athletics versus academics is coming under increased scrutiny, particularly at some of the country’s most prestigious universities, Livingstone College student athletes are proving success off the playing field can rival success on it.
Officials with the Central Intercollegiate Athletic Association announced recently that Livingstone’s women’s tennis team and its men’s golf team have the highest GPA among all 12 member institutions.
The tennis team, comprised of Shannon Davis, Tenesha Dickerson, Arria Evans, Shondra Redfern and Miracle Wigfall, had a cumulative grade point average of 3.57. The men’s golf team, comprised of Lawrence Mckenzie, Stephen Washington, Telvin Walker, Kristofer Hemphill and Leonardo Manzo, had a cumulative grade point average of 3.28.
Those squads join the men’s basketball team, who won the CIAA Championship in March for the first time in school history, and was cited for having the highest GPA among the 12 men’s hoops squads.
“I cannot say enough about this recognition because it shows that at Livingstone College we recognize academics is the highest priority, and we are very fortunate to be able to recruit quality athletes who are also academically talented,” said President Dr. Jimmy R. Jenkins, Sr. “For too long people have made excuses for student-athletes, saying the amount of time they spend practicing and competing makes it hard for them to maintain good grades. While it is certainly true student-athletes often have rigorous schedules to follow, it is also true they’re students first and athletes second and academics must always be the priority. I am extremely proud of our women’s tennis team and our men’s golf team for this exceptional recognition and for continuing the academic excellence started earlier this year by our men’s basketball team.”
Andre Springs, who came to Livingstone several years ago as its golf coach and has been athletic director since July 2012, said he knows how tough it is to maintain good grades while participating in athletics. Springs played golf during his four years at Fayetteville State University, another CIAA school, where he earned a bachelor’s degree in physical education. He has read reports detailing how some institutions lose sight of the importance of athletics but is determined that won’t happen at Livingstone.
“I knew even before I became athletic director that academics had to be stressed to our players on a regular basis,” Springs said. “I knew that because young adults come to college to earn degrees, and what’s more, those who participate in sports can’t compete if their grades don’t meet NCAA eligibility requirements. I think the golf team is going in the right direction. This is our second consecutive year having the highest GPA among the CIAA golf teams, and with the new players I have coming to join the team I already have, I look for our athletic record to align with our academic success.”
Tennis Coach Gwen Jackson said she’s proud of her players for maintaining an honors-level GPA throughout the season.
“The credit goes to the young ladies themselves because they were self-starters and were always aware of their academic pursuits,” Jackson said. “I constantly encouraged them to do well academically, but the credit goes to them 100 percent.”
Jackson said tennis can be excruciating in terms of the practice schedule and actual matches, but her players remained disciplined nonetheless with respect to homework, studying, papers and tests.
“I’m very proud of them and excited about the futures they’re helping to create for themselves,” said Jackson, who has a bachelor’s degree from Queens University in Charlotte. “The excellence demonstrated by the tennis players, the golf team members and the basketball squad proves that the standard of excellence Dr. Jenkins wants for the entire Livingstone College campus can be met.”