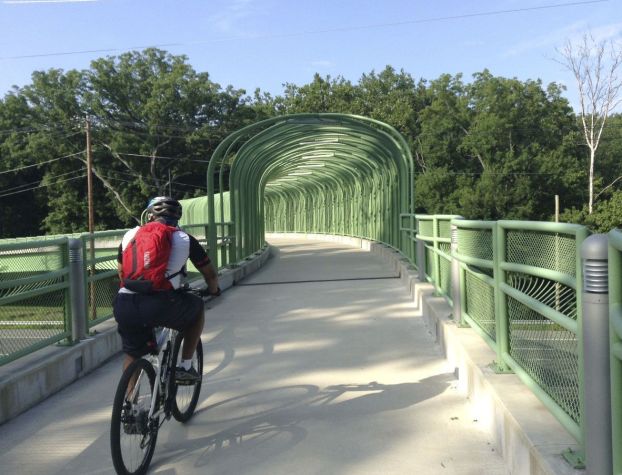 The talk has been about the major storms forecast for the Washington, D.C. area. Last night, lots of damage was done in the area and more was expected this evening. I made it to Mt. Vernon this afternoon while the first round of storms were building. Just as I was leaving, the bottom fell out, with lots of lightning and thunder, and heavy rain poured down for about 40 minutes. I quickly found a small overhang to get under. Both the bike and I barely had room to be out of the worst of it.

That was the first round. I called it a day when I arrived at Drumfries, Virginia, late this afternoon. The clouds were building again, and there were no bright spots in the sky. By 6:30 p.m., I had a dry room, plenty of food, a shower, my clothes washed out and delight of watching a heavy downpour from inside this time. By this writing, it has now been pouring for over two hours.

The day started off a little slow. The humidity was high this morning as I searched for the Rock Creek Park Trailhead. I talked with Ted and Jane early and enjoyed their enthusiasm for my ride. Once on the trail, I realized that Rock Creek Park was a linear park, close to 15 miles long. The bike trail followed Rock Creek nearly all way down to Washington, DC. The trail was good, but very confusing with lots of spurs off it that were hard to follow. When it ended, I was supposed to follow the Capitol Trail, and never saw a sign for it. Somehow, with help from Luther Perkins and Anita Jackson, I made it into the city.

The first sight of Washington and the Potomac were spectacular. I came off the trail right near the Kennedy Center, then rode toward the Arlington Bridge to cross the Potomac. The Washington Monument and the Lincoln and Jefferson memorials all looked great. At that point, I jumped on the Mt. Vernon Trail and set out for General Washington’s home. This trail was better because it was along the Potomac and in better shape than the others. These trails were all hard to ride because of the meandering that was required. They were better suited for mountain bikes than a loaded touring bike.

One big highlight was passing under the flight line for the Reagan Washington National Airport. I joined a good crowd that were there watching the big jets land, just 100 feet or a little more above us as they approached the end of the runway.

Later, after making it to Mt. Vernon and enduring the rain delay, I pedaled out to U.S. 1 and headed south. Traffic was heavy, but they made room for me. I made it to Drumfries, which puts me right in the middle of Civil War history. Manassas is just 15 miles away, and I am headed for Fredericksburg, Spotsylvania Court House, and the Stonewall Jackson Memorial tomorrow. If all goes well, I should get to Richmond and near the halfway point of the Maine to the Keys trip. Total distance for today was 67 miles.

Just a few thoughts about what I value the most at the end of the day. I love getting off the seat of the bike, taking off my shoes and socks, eating a ton, a good shower and finally a prayer before lying down to sleep. Those rewards are simple, but incredible.

Your daily look at late-breaking news, upcoming events and the stories that will be talked about today: 1. HAMAS REJECTS... read more