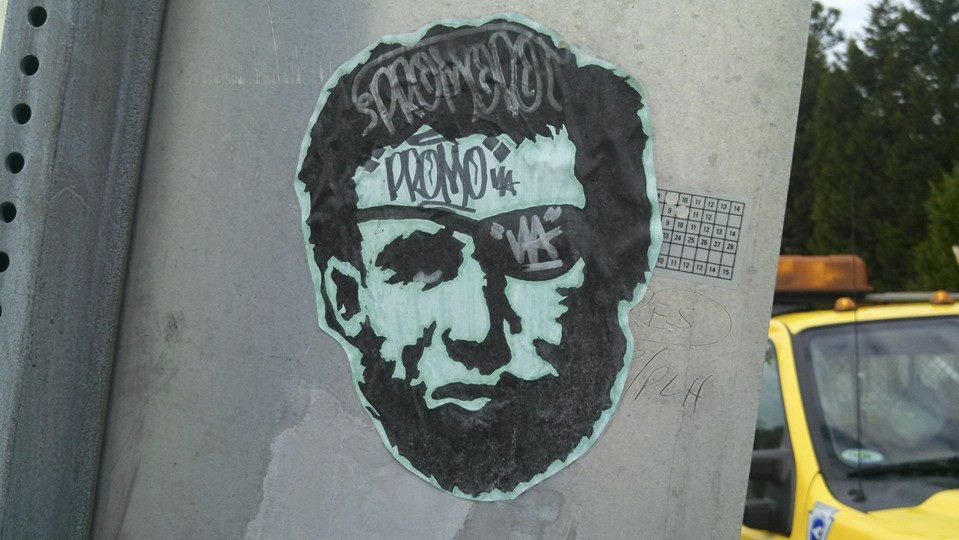 James Lambert was on his way to work in February and saw some strange markings and what appeared to be stickers on several signs along Woodleaf Road. He took pictures and posted them to his Facebook page, hoping someone would know what the markings meant.
Most of the markings were the word “promo” written on stop signs and speed signs. Some signs and a few bridge delineators had the word “status” and others had U.S. Postal Service stickers with the same words.
The stickers and graffiti have been taken down, and signs that were spray painted have been replaced. But the same kind of stickers began showing up on city property this week.
Salisbury police are trying to determine who placed postal stickers with drawings of a face throughout the city.
They were discovered Tuesday by a city landscaping employee who found the square-shaped stickers on electrical boxes, street signs and buildings. Someone stenciled a face on stickers found on the graffiti wall at North Main and Horah streets, at the parking lot of the Plaza, and at South Church and South Jackson streets.
Authorities found one sticker on the former First Bank property. Some of the graffiti that’s been spotted includes the word promo, which was painted just outside the Salisbury Police Department.
Salisbury Police Capt. Shelia Lingle said the department hasn’t had this type of sticker graffiti reported before.
She said investigators determined the postal stickers are free to the public. An investigator inquired with the Post Office on East Innes Street to see if the stickers could be placed behind the counter, but was told by a postal worker it goes against their policy.
The stickers are left on the counter for the public to use. However, officials are asking if someone knows more information about the stickers and other graffiti to contact them.
The sticker graffiti, which is also called “slaps,” is not new. Internet searches show this type of graffiti has been around for at least six years.
It is not clear from law enforcement yet how far this type of graffiti has been reported, but Lambert said a friend of his saw a similar postal sticker on an Albemarle restaurant.
Lambert said he wished whoever was tagging signs and other property would consider how much it costs the owners or taxpayers to have to replace or clean the marked property.
He estimates a typical sign with graffiti on it costs about $75 to replace, which includes a new sign, the personnel to make changes and the truck to travel to wherever the sign is located.
Lambert, who works for the Department of Transportation, had to replace all of the signs himself.
He also noted the graffiti could be distracting to drivers who may try to read the signs as they pass.
Anyone with information is asked to contact the Salisbury Police Department at 704-638-5333 or Crime Stoppers at 1-866-639-5245.