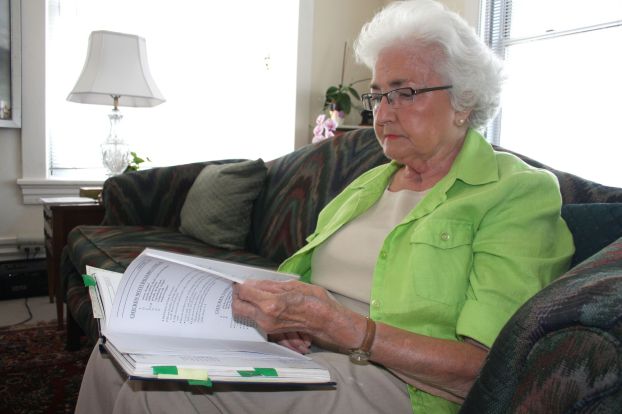 Food for the Soul: St. John’s ‘Feast of Love’

By Susan Shinn
For the Salisbury Post
In 1997, St. John’s Lutheran Church celebrated its 250th anniversary. The congregation published a cookbook, “Feast of Love,” as part of one of many special events that year.
The church eventually sold all 1,000 copies, which have been well used and well loved over the years by many of its fine cooks.
St. John’s had published another cookbook in the 1970s, says Janie Allen, who served as co-editor of the 1997 volume.
“It had been long enough that we felt it was appropriate to do another one,” Janie says. “It was one of the first things we agreed to do for the 250th anniversary.”
The committee came up with the name from “This is the feast,” part of the liturgy from the Lutheran Book of Worship — the “green book” — that was sung frequently at the time.
“We went to the windows in our chapel and found Jesus doing his first miracle, changing water in the wine,” Janie notes. “It was a special occasion with food and drink.”
That stained glass window became the focal point of the cookbook’s cover, and was set on a dark blue background.
Carol Hair is listed as “computer typist.” Which of course means she typed in every one of the book’s hundreds of recipes.
“She made a tremendous contribution to this cookbook,” Janie says. “She was just an absolutely perfect person to do it. It seems like she did it effortlessly.”
With a career in food service, Margy Fink served as cookbook committee chair.
“We didn’t have any trouble getting recipes,” Margy says. “People were most cooperative. I was just thrilled to death with the way the cookbook looked.”
She adds, “One of the things I remember was continuously checking the recipes to make sure we didn’t have any errors in them. I read every recipe Carol typed.”
“It was a task, I’ll put it that way,” Carol admits.
Janie and her husband, Sonny, wrote introductions for each category in the cookbook, highlighting St. John’s history.
“It was a big-time food place,” Janie says. “We’d have events and feed 700 to 800 people. At one time, I think we had one of the biggest Sunday schools in the nation.”
The committee put out a call for recipes through the newsletter, bulletins and through personal contacts, Janie says. She was especially pleased to have some recipes from the late Juanita Williams, a longtime caterer. Juanita started an Octogenarian Luncheon — an event honoring members 80 and over — that continues today.
“We just thought Juanita was the best cook in the world,” Janie says. “We all wanted her food.”
Along with serving as co-editor, Janie also contributed sketches to the cookbook, as did Donna Beilfuss, Donnie Moose and Montye Furr.
“We had a good time,” Montye says. “It was fun meeting with the other artists.”
There were a couple of unusual sections — recipes by and for children, and the St. John’s men also had their own section.
Janie admits that at first, she was skeptical about devoting a chapter for children.
“As I look back at it, I think it’s wonderful for folks to see,” she says. Of course, the children who contributed those cute recipes are now grown.
Thumbing through the cookbook, Janie points out recipes from local caterer Matt Trexler, and members Jim Chesky and his wife, the late Barbara Chesky.
The Cheskys were both great cooks, and contributed a variety of recipes culled from Jim’s naval service in many locations across the country.
“They weren’t local, Piedmont recipes,” Janie says. “They gave us more of a national flavor.”
Because the Ritchie family are members of St. John’s, the cookbook has several Cheerwine recipes.
Another family from St. John’s, the Rufty family, is highlighted at the beginning of one chapter. Janie remembers that the Ruftys filled up several rows in the sanctuary each Sunday.
The cookbook has many special notations in the recipes, such as where the recipe came from.
It’s not without touches of humor. The Rev. Marty Stevens, who was St. John’s associate pastor at the time, submitted a “recipe” for the Best Dinner Ever which included ingredients of meats, vegetables, breads and desserts.
“Arrange with various members in the congregation to provide casseroles and/or leftovers from covered dish dinners,” she wrote. “Freeze in one-serving portions. Remove from freezer. Microwave until heated. Enjoy — after giving thanks for the cook!”
“She was a single lady and not a cook at all,” Janie says, smiling. “That was her contribution.”
Janie says it makes her a little sad to see recipes from members who have passed on.
“But,” she says, “I’m so happy we have these recipes.”
One of those recipes is Don Weinhold’s French Onion Soup. Janie worked in Don’s law office for about six years.
“He’d cook for us around holiday time,” she says. “He had a big staff for an attorney in solo practice. He’d fix big, thick steaks and French Onion Soup from this recipe. I wanted something from him because he was such a great cook.”
Don never gave out the recipe, but after his death, his mother, the late Merrea Weinhold, found the recipe — stained and dog-eared — and submitted it at Janie’s request.
“These are tried and true recipes,” Carol says. “Cranberry Bread is a recipe I have used for 40 years, that I got from a dear neighbor in Wisconsin. I think of her every time I use the recipe.”
No doubt other St. John’s cooks do the exact same thing with favorite recipes in “Feast of Love.”

It was a great thing to get a full night’s sleep on Sunday night. It was my first time with... read more