Rowan down 2-1 after Game 3 defeat 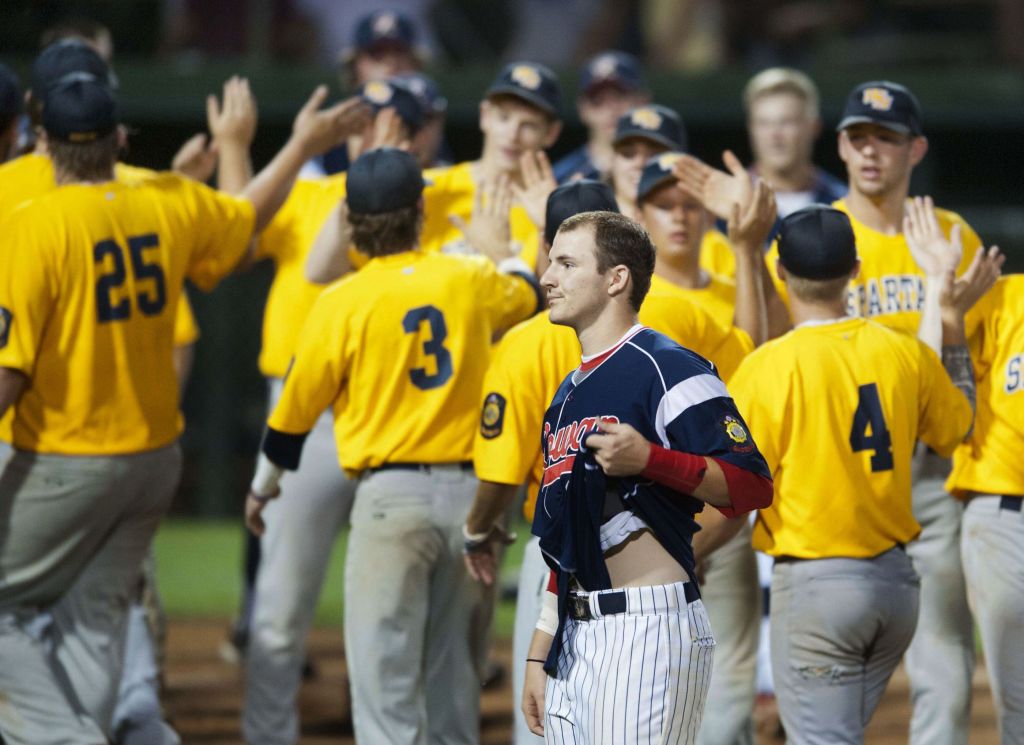 SALISBURY — Suddenly the bats have gone silent for the Rowan County Legion team and the timing couldn’t be worse.
Winston-Salem Post 55 got another complete game pitching effort Monday night, this time from righty Dakota Devine, defeating Rowan 6-2 and gaining the upper hand in their best-of-five Area III semifinal series. With a 2-1 series lead, Post 55 will host Rowan (24-8) at Mocksville’s Rich Park tonight with a chance to close it out.
No one on the Rowan side is ready to throw in the towel on a solid season just yet, but it’s an uphill climb from here.
“We will come out and fight to the end,” outfielder Harrison Baucom stated. “But for myself and our other hitters, we just have to have better approaches at the plate and get after it.”
Sunday night Rowan was shutout on four hits in a 2-0 loss then last night they trailed the entire game and were unable to generate any sustained pressure against the Winston defense or pitcher. It was frustrating for a team average double-figure hits and runs for much of the season.
Devine threw 120 pitches in the complete game effort and at one point in the middle innings retired 12 of 13 batters he faced. His biggest challenge came in the seventh with the 6-2 lead when he hit the first two batters he faced. Baucom and Michael Pinkston advanced to second and third on a bunt but Devine snagged a comebacker for out two then notched a crucial strikeout of leadoff hitter Michael Caldwell to end the threat and essentially secure the game.
“One of the things I pride myself on is that I don’t feel pressure,” said Devine, a Mt. Tabor graduate headed to Catawba Valley Community College. “Whatever the situation, it doesn’t affect me. I just shut it out and pitch.”
Post 55 head coach Mike Lovelace was effusive in his praise for Devine, not just Monday night but all legion season and for four years at Mt. Tabor.
“Dakota was just unreal tonight,” Lovelace said. “The way he got out of that jam in the seventh was tremendous. We just did what we needed to do tonight to get the win against a very good Rowan team.”
Lovelace was also pleased with the fact that his starting pitchers have remarkably produced three straight complete game efforts in the Rowan series.
“We have a bullpen and will go to it when we need to,” Lovelace said, “But we are not going to yet.”
Winston Salem (15-11) backed their pitcher with an impressive 13-hit attack and error-free defense. With the score tied 1-1 in the top of the third, Post 55 padded their margin with three runs on four hits led by their relentless leadoff man Ty Andrus. The RJ Reynolds grad went three for four with three stolen bases and two runs scored.
In the decisive third he led off with a single, stole second and scored on Hank Niblock’s single. Tanner Lomax, who also had three hits, scored on a Drew Fisch double then a wild pitch made it 4-1. The outburst ended the evening for Rowan starter Chase Jarrett after three frames.
Harrison Bell came on and gave Rowan six solid innings of relief, allowing just one earned run on six hits and keeping his team close enough for a comeback. But the Rowan offense could not respond.
Still it was a different experience for Bell.
“All season I have been a one inning guy,” Bell stated, “I haven’t really had any pressure like that in a playoff game. But our defense was outstanding. We just couldn’t put up the runs.”
Rowan cut the lead to 6-2 in the sixth when Riley Myers walked and came in to score on a fielder’s choice grounder by Heath Mitchem. Myers and Luke Setzer provided the bulk of Rowan’s offensive punch with a pair of singles each.
Faced with the potential end of their season in tonight’s match-up in Mocksville, the Rowan team’s challenge is clear.
“We have got to try and throw everything that we can at them and see what we have left,” Coach Jim Gantt said. “We want to try and get back here for a fifth game but we just have to play smarter and take better approaches at the plate.”
Rowan is expected to go with lefty Hunter Shepherd tonight against Winston likely starter righthander Jon Cagle of Mt. Airy High.