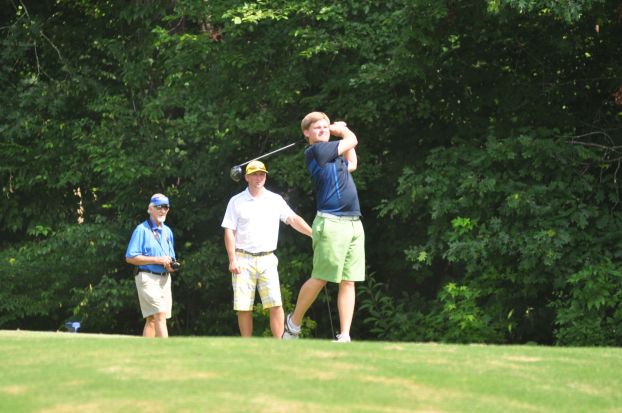 Kevin Lentz shot 67 to lead qualifying for the 36th annual Horace Billings Rowan County Amateur Tournament at Corbin Hills.
Keith Dorsett (69), Ryan Honeycutt (70) and Nick Lyerly (70) were the other top qualifiers.
The top 32 qualified through stroke play for a match-play tournament that starts Friday.
Defending champion Andrew Morgan is the top seed.
Morgan tees off against Chuck Valley on Friday at 2:46 p.m. Lentz faces No. 31 seed Bucky Bradley at 3:18.
See Scoreboard for pairings.
McCanless
Winston Smith made a hole-in-one on Monday at McCanless.
Smith aced the 135-yard No. 3 hole with a pitching wedge.
He was playing with the “Quarter Guys.” His group included Charles Roberts, Kristi Laton and Gene Seaford.
It was the second career hole-in-one for Smith.
Irish Creek
Logan Shuping shot a 2-under 69 Monday and won a Tarheel Youth Golf Association event held at The Club at Irish Creek on Monday.
Shuping qualified for the TYGA Tournament of Champions in August at Hyland Golf Club in Southern Pines.
The Run It Down Alumni Basketball Tournament at North Rowan is sponsored by Wash Me Detail Shop.
First-round matchups were announced:
July 25, 5:30 p.m. — Carson vs. Salisbury
July 25, 7:15 p.m. — South Rowan vs. Lexington
July 25, 8:45 p.m. — North Rowan vs. Davie
July 26, Noon — A.L. Brown vs. West Rowan

East Rowan’s 9U all-stars beat Upper Cleveland 13-1 on Monday to advance to the WNC Cal Ripken state championship series in Lexington.
East will play a best-of-three series against Porter Ridge or Surry North.
• East’s ER 10U all-stars defeated Indian Trail on Monday to finish out their bracket in the WNC state tournament.
East then beat China Grove 6-4 in the first game of the best of three state championship series.
Game 2 is tonight at 6 in Hildebran, with Game 3, if necessary, at 8.
Following a career-best finish of third at Michigan International Speedway, Justin Allison (West Rowan) is set to make his Chicagoland Speedway debut for the Ansell ActivArmr 150 on July 19.
“I’m really excited to get back in the No. 88 HaVACo Ford,” the 22-year-old Allison said. “We had a great run at Michigan, so I know we’ll have a strong outing come Chicago.
“I’m hoping to not only keep the top-5 streak going, but finally get that first win out of the way.”
Allison’s 2014 part-time schedule includes all of the FOX Sports 1 televised races.
He captured a top-10 finish at Toledo Speedway and then moved on to Pocono Raceway to earn a top-5 finish.
The Kernersville Bulldogs played the Charlotte Crushers in a doubleheader at Rich Park on Monday.
Kernersville swept the two games.
Avery Rogers (East Rowan, Guilford) struck out six in two innings of relief while allowing an infield hit.
For the season, Rogers has struck out 30 in 16 2/3 innings. His ERA is 1.62.

Thanks for what you do!