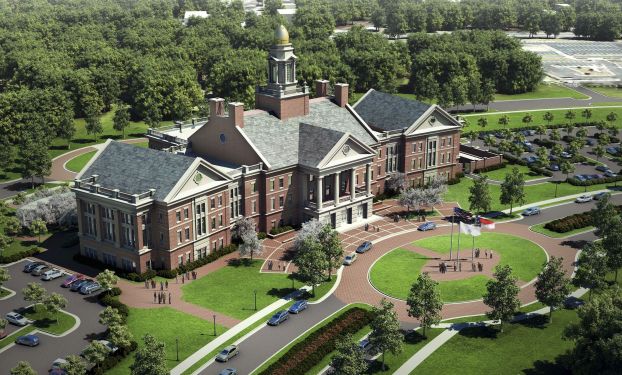 KANNAPOLIS — Kannapolis City Council on Monday night unanimously approved the financial plan for its new City Hall and Police Headquarters building.
With value engineering completed — areas in which costs were able to be decreased — construction for the 106,000-square foot building has been budgeted at $27,374,410. The facility is being built by Rodgers Builders of Charlotte, at a cost of $258.25 per square foot. The construction company’s officials said this number was in line with other similar projects.
As a part of the vote, council established that this overall figure would be the project’s guaranteed maximum price.
With furniture, fixtures and equipment, the total project is slated at $32,908,409.
The city will borrow $24.5 million, having $6 million in existing revenues that City Manager Mike Legg termed a “down payment.” The city will make interest-only payments in 2015 and 2016, with principal payments beginning in 2017. Total debt will exist for 20 years, with principal paid over 18 years.
Legg said that council could still save money — about $200,000 — in constructing shell space for future meeting areas, but said that the overall cost would not decrease much more. He did say that value engineering had helped shave some $660,000 off the original price tag.
“We’ve squeezed this as much as we can,” Mayor Darrell Hinnant noted.
Rodgers officials laid out a timetable for building construction, including foundations being set in mid- to late-July; structural steel set in September; and interior work beginning in February, with most of the project complete by November 2015.
Even though the project has not been approved by the N.C. Department of Insurance — a courtesy review, according to Legg— Rodgers staff members said they were confident this timetable would be met.
Legg said the review isn’t technically due until an Aug. 5 meeting with the N.C. Local Government Commission, but he hopes approval would be given well before that.
“We have steel ready to go,” Legg said, “but we really can’t do anything without a building permit.”
“Are we going to be working on this seven days a week?” Councilman Ryan Dayvault asked.
“We’re going to do whatever it takes to get it done,” said Will Myer, Rodgers’ onsite coordinator.
In other business, council unanimously approved the following:
• The funding of an economic development grant to Rowan-Cabarrus Community College in the amount of $150,000. The college is relocating several of its programs, including its cosmetology program, to downtown Kannapolis.
The renovation project to the old Belk building is expected to be completed in May 2015. Cabarrus County has given $1.5 million for the project, and the college is contributing $329,000.
“We need people downtown,” Hinnant said. “This will bring people downtown.”
• Demolition of a home at 1700 Chapman Ave. Community Development Block Grant funds are available to cover the cost of the demolition, estimated at $7,000.
The homeowner, Marilou Hubbard, requested and received a 90-day extension from Council at its April 14 meeting. However, said Jeff Wells, deputy planning director, no work has been done on the house since late April.
“I guess they’ve given up on the property,” Wells said.
• Reappointments of Dorethea Smith, Bud Aungst, Vernice Gallon and Carolyn Lawson to the Citizen’s Advisory Commission for Community Development.
• The reappointment of Ken Argo to the Rowan-Kannapolis ABC Board.
Freelance writer Susan Shinn lives in Salisbury.