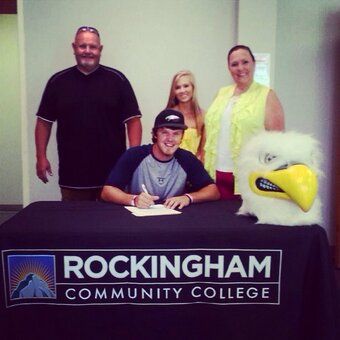 GRANITE QUARRY — He did it quietly, so you may have missed it, but East Rowan graduate Mason Doby raised his batting average 150 points as a senior.
Doby improved from a .170-hitting outfielder to a .320-hitting third baseman in 12 months time, and that improvement has gotten him a chance to play at the next level.
Doby signed recently with Rockingham Community College, which competes in Region X of the National Junior College Athletic Association with schools such as Catawba Valley and Surry.
“The school is in Rockingham County, north of us,” Doby explained. “When I tell people Rockingham, the first thing they think of is the city that’s to the east of us.”
The Rockingham to the east is the home of that motor speedway, known as “The Rock.” It used to host two NASCAR races a year.
Where Doby is headed, there’s no famous racetrack. Rockingham Community College is in the town of Wentworth — population 2,800. Wentworth is close to Reidsville and Eden. Doby couldn’t hit a baseball from Wentworth to the Virginia state line, but he might come reasonably close.
East coach Brian Hightower is just glad Doby is getting a shot with someone.
“I didn’t know if anything would happen for him or not, but I’m glad it did,” Hightower said. “He worked his tail off for us.”
Doby said Rockingham coaches contacted him about attending a tryout camp, and he did well with the right people watching.
“I hit in the cage, threw from the infield and outfield and ran a 60,” Doby said. “They made an offer not long after that and I decided to sign.”
At 6-foot-1 and 180 sturdy pounds, Doby passes the eye test. He also bats left-handed, a big plus. Second basemen, third basemen and shortstops who swing lefty aren’t that easy to find.
“I’m right-handed, but when I first picked up a bat as a little kid, I swung left-handed,” Doby said. “When people told me I needed to turn around. my dad asked them if they were crazy. It’s an advantage.”
East won the South Piedmont Conference regular season and tournament championships last season. Doby played in all 30 games and was a fixture at third base and in the No. 8 spot in the lineup for a 22-8 team.
“Third base is not an easy place to play, but he did a good job for us,” Hightower said. “And he swung the bat solid for a guy in the 8-hole.”
Doby can play first base or left field, but he prefers third, and that’s where he’s most likely to play.
Besides getting 24 hits, Doby walked 10 times this season. You may be surprised that his on-base percentage of .420 was third among East’s regulars, behind only stars Luke Setzer and Michael Caldwell.
Doby said the most memorable game of his career was East’s victory this season against Carson in the SPC tournament final. Doby was instrumental. He scored two runs in a 4-3 win. His single was important and the nice bunt he laid down that got thrown away and keyed East’s comeback was even bigger.
“I got a hit against Colton (Laws) on a night when he was really tough, so I’ll remember that one,” Doby said.
Doby had five two-hit games as a senior, including East’s last one — a playoff loss to Piedmont. He went 4-for-10 in the Mustangs’ three playoff games to close his prep career on a high note,
“Doby is one of those million-dollar kid, and I hope he cando well,” Hightower said. “He’s getting a chance to play ball and go to school, and a chance is about all anyone can ask for.”