Columns return to the Blackmer House 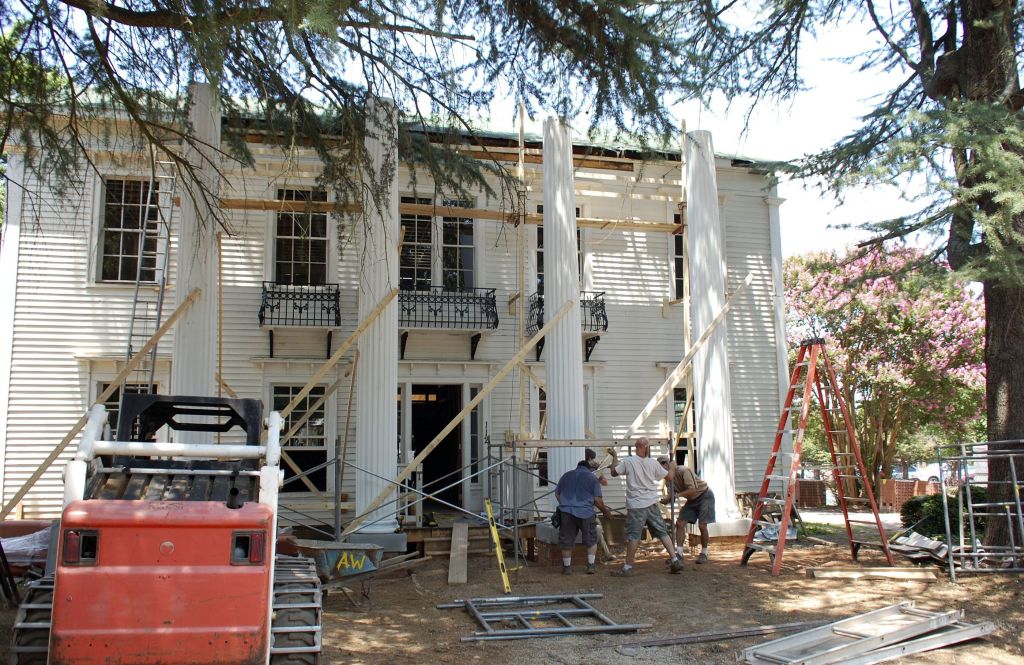 SALISBURY — Four two-story columns, long absent from the front of the 1820 Fulton-Mock-Blackmer House at 112 S. Fulton St., are back.
Contractor Al Wilson and his crew set and braced the columns into their places on brick pedestals and concrete plinths Monday as restoration continues on the historic house, now owned by Glenn and Beth Dixon.
It’s not known exactly when the columns were added to the front of the house, but they were dominant features to a once grand front porch/portico documented in photographs and still remembered by many longtime Salisbury residents.
The columns survived a 1984 fire that severely damaged the structure. They ended up in storage for almost 30 years.
At various times, Wilson says, the columns were stashed away in Grimes Mill, the vacant house, the garage in back and most recently in his shop, where they had to be restored.
Even when they were in place, the pine columns had begun to split open from age. They are constructed much like the staves of a barrel. Wilson had to glue, clamp and fasten the column staves and relied on ratchet straps to squeeze things together.
The columns themselves are 20 feet tall, not counting the bases or caps, which have yet to be added. The new capitals will be made of a cast epoxy resin — actually one of the few manufactured pieces of millwork going into the restoration.
Wilson praised Rowan County craftsmen such as Gary Curlee and Butch Hollifield and Salisbury companies such as Goodman Millwork who are or will be replicating much of the woodwork for the project.
In mid February, the Dixons bought the house from Historic Salisbury Foundation for $150,000 and almost immediately began the restoration. The Dixon family plans to live here when the renovations and new construction are complete.
The house is maybe best known as the home of film and stage actor Sidney Blackmer and his wife, Suzanne. They purchased the house in 1931, and Suzanne was still living in the house when the 1984 fire occurred.
The couple’s oldest son, Jonathan Blackmer, sold the house to the foundation in 2012, and the foundation cleaned up the property prior to the sale to the Dixons.
John Fulton built the house in 1820 as his residence and a boarding house for girls attending the female academy at the Hall House. The A.J. Mock family bought the home later, followed by the Blackmers.
Wilson guessed that the columns might have been added to the house in the early 1900s, but he acknowledged they could be much older.
Contact Mark Wineka at 704-797-4263.