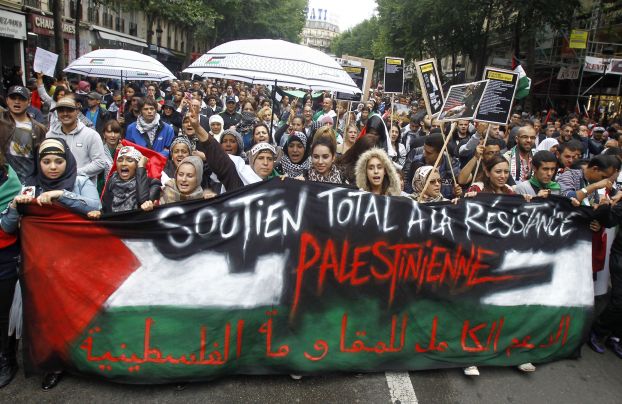 GAZA CITY, Gaza Strip (AP) — Thousands of Palestinian residents of the northern Gaza Strip fled their homes on Sunday and sought safety in U.N. shelters, heeding warnings from the Israeli military about impending plans to bomb the area in the sixth day of an offensive against Hamas that has killed more than 160 people.
The fighting showed no signs of slowing, despite international calls for a cease-fire and growing concerns about the mounting civilian death toll in Gaza. U.S. Secretary of State John Kerry spoke to Israeli Prime Minister Benjamin Netanyahu and voiced U.S. “readiness” to help restore calm, while Egypt, a key mediator between Israel and Hamas, continued to work behind the scenes.
U.N. Secretary-General Ban Ki-moon called for an immediate cease-fire in a statement issued late Sunday by his spokesman’s office.
Ban “strongly believes that it is in the interest of both sides that steps toward dangerous escalation be replaced with immediate measures to end the fighting, thus preventing further casualties and greater risks to regional peace and security,” it said.
Ban condemned Hamas’ indiscriminate firing of rockets against Israeli civilian targets as “a violation of international law,” it said. He abhorred “the image of Israeli families hovering in shelters in fear of their children’s safety” and demanded “an immediate cessation of these indecent attacks.”
At the same time, the U.N. chief is “deeply worried about the impact on Palestinian families of Israeli military action. Too many Palestinian civilians have been killed, and any Israeli ground offensive will undoubtedly increase the death toll and exacerbate civilian suffering in the Gaza Strip,” it said.
Ban noted that despite the U.N. Security Council’s demand for a cease-fire, “the situation in and around the Gaza Strip appears to be worsening,” it said.
Amid the diplomacy, Israel said it was pushing forward with preparations for a possible ground invasion of Gaza. Thousands of troops have massed along the border in recent days.
“We don’t know when the operation will end,” Israeli Prime Minister Benjamin Netanyahu told his Cabinet on Sunday. “It might take a long time.” He said the military was prepared “for all possibilities.”
Israel launched the offensive last Tuesday in what it said was a response to heavy rocket fire out of Hamas-controlled Gaza. The military says it has launched more than 1,300 airstrikes, while Palestinian militants have launched more than 800 rockets at Israel. The Palestinian Health Ministry in Gaza says 166 people have been killed, including dozens of civilians. There have been no Israeli fatalities, though several people have been wounded, including a teenage boy who was seriously injured by rocket shrapnel Sunday.
Early Sunday, the Israeli air force dropped leaflets around the northern Gaza town of Beit Lahia ordering people to evacuate their homes. Israel says much of the rocket fire has come from the area, and overnight Sunday, the military carried out a brief ground operation on what it said was a rocket-launching site that could not be struck from the air. Four Israeli soldiers were lightly wounded before returning to Israel.
The U.N. refugee agency for Palestinians, UNRWA, said some 17,000 Palestinians had headed to special shelters set up in 20 United Nations schools in Gaza.
“The fact that in a span of almost a few hours, 10,000 people sought refuge in these 15 schools is an indication to the difficult situation on the ground,” said Sami Mshasha, a UNRWA spokesman.
Some raced by in pickup trucks, waving white flags. “Once we received the message, we felt scared to stay in our homes. We want to leave,” said one resident, Mohammed Abu Halemah.
Shortly before nightfall, Israel carried out a series of airstrikes in the northern Gaza town of Beit Lahia. Hamas’ Al-Aqsa TV station reported four airstrikes in a 10-minute span, and a large plume of black smoke could be seen over the area from the Israeli border. There were no immediate reports of casualties.