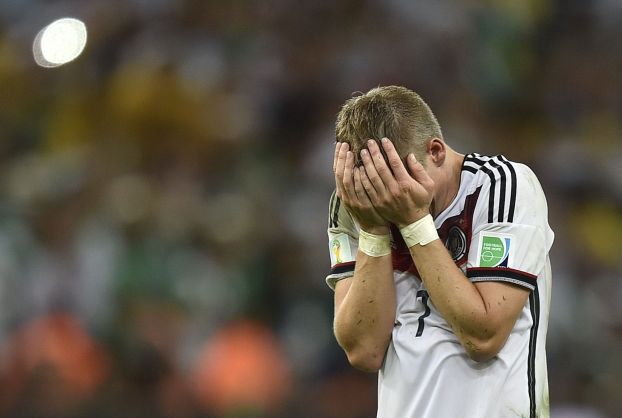 Schweinsteiger a hero for Germany

RIO DE JANEIRO (AP) — Battered and bloodied, Bastian Schweinsteiger kept fighting. No Argentine tackle or foul would keep the German midfielder from lifting the World Cup trophy.
Schweinsteiger battled through the final and Germany won its fourth title with a 1-0 win over Argentina on Sunday at the Maracana.
The 29-year-old midfielder was twice led off the field to be treated but returned to hold Germany together.
“We are enjoying the moment, it’s incredible. Thank you Germany for all the support,” Schweinsteiger said. “We could feel here how the country was behind us. It’s an incredible performance, I’ve never seen the boys on the bench participating so much. That gave us a lot of energy, that’s why we won the cup.”
Schweinsteiger is one of the generation of German players who have been chasing the title for 10 years and who saw the Brazil tournament as probably their best — if not last — chance to end their careers as World Cup champions.
With 108 matches for Germany, Schweinsteiger is one of the veterans on the team and one of its leaders. But he nearly missed the tournament.
Schweinsteiger struggled throughout the season with an ankle injury that required surgery and later knee injury that put into doubt his fitness for the tournament.
Coach Joachim Loew decided to take him along although he missed a good part of the pre-tournament training camp. Schweinsteiger sat out the first match of the World Cup and was slowly nursed back into the team as his fitness improved during the tournament.
Schweinsteiger plays in the key position in front of the defense, working hard to intercept the opponent’s attacks and then set Germany’s counter-attacks into motions.
Loew calls him his team’s “pacemaker.”
Against Argentina, Schweinsteiger had even more responsibility since fellow defensive midfielder Sami Khedira could not play because of a calf injury and his replacement Christoph Kramer had to leave the game with concussion after half an hour.
With Toni Kroos struggling, it fell to Schweinsteiger to carry Germany’s game, along with captain Philipp Lahm.
“All players gave it all they had,” Loew said. “Schweinsteiger and Lahm were incredible, they probably gave more than ever in their careers.”
Schweinsteiger covered more than 15 kilometers during the final.
Javier Mascherano and Sergio Aguero were both lucky to escape without red cards after fouling Schweinsteiger while on yellow cards.
Schweinsteiger’s face was badly cut when Aguero struck him in the face as they jumped for the ball and had to receive treatment. But he battled on. He also appeared to have a groin problem after limping off late in the match as he stretched himself to stop an Argentine attack. But he came back again to lift the trophy.