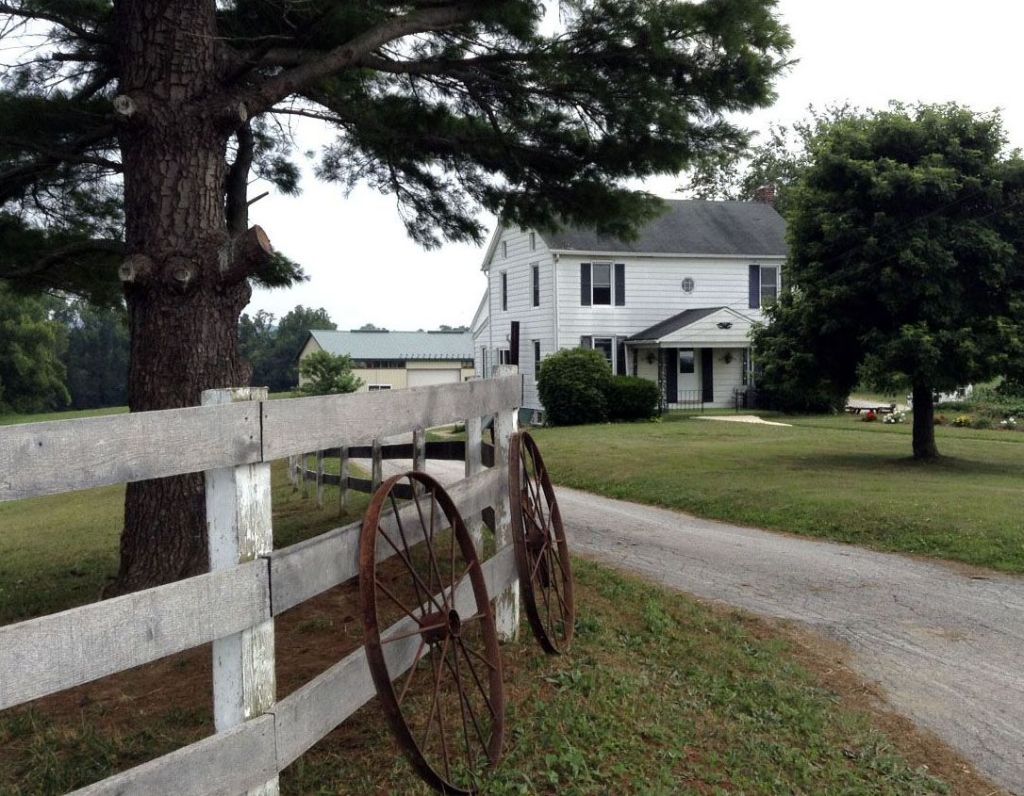 Saturday night, I got in the motel about 8:30 p.m. That is pretty late to get some photos and a story in to the Post, plus eat, answer e-mails, plan for the next day, and get cleaned up. It was close to midnight when I lay down to sleep. My plan was to be out the door by 6:30 a.m. because I knew Sunday was going to be challenging.

When I got up, I realized that my phone was dead and my iPad was almost out of power too. The outlets that I had plugged them into did not work evidently, so I quickly moved them to others and tried to get some quick charging done. It was just after 8 a.m. when I went out the door, definitely the latest that this has happened during the whole trip. It was easy for me to think that I was starting from behind and probably would not have a good day.

Since I was joining the Adventure Cycling route again, I had to find the start for the day. While doing that, I saw six Amish horse-drawn carriages on the way to church. They all returned my waves.

I headed out just a little to the north and west of Reamstown right through some more farming country. It was beautiful, of course, not a single person could be seen around the Amish or Mennonite farms because it was Sunday. The route got hilly quickly, just as I was joined by a cycling group. They were all practicing for a ride in Iowa.

I last saw them at a convenience store in Manheim. I rode on to Mt. Joy, and the hills were increasing, adding to my sense of falling behind for the day. On the map, I saw that I would be following the mighty Susquehanna River, starting in Marietta and again at Columbia and finally at Wrightsville where I came off the long bridge, I quickly saw that the big historic fact about the area was the bridge burning during the Civil War Gettysburg campaign. The Union soldiers set the bridge on fire to stop the advance of a segment of Lee’s troops.

My path led out of town to follow a flat river, or so I thought. This had happened lots of times on cross country trip. Flat happened for about half a mile and then came the most serious climb I had met since the Rockies. The Susquehanna is buried deep in a valley, and the roads climb quickly as they leave the river. I eventually made it to Lake Clarke, very popular for boating. Brandon Ehrhart told me what to expect as I climbed away from the lake. For the first time on the trip, I had sweat dripping off my elbows. A stop for ice cream helped, and I kept climbing out of the farmland to Airville and Sunnyburn. I really didn’t notice much of a town at either.

I made it finally to Otter Creek and a beautiful campground. I had not planned for a place to stay overnight, but realized that there were a couple of motels coming up near Delta, Pa. I got a great deal on a good room here, being off the bike by 6:30, a couple of hours ahead of last night. I had 69 hard-fought miles today, and for once that was enough.

Tomorrow, I will enter Maryland. It is just a mile from my motel tonight. I expect some hills again tomorrow, but I am ready to go after them. I will get close to Virginia tomorrow also, setting me up for long ride through Washington, D.C., on Tuesday. Richmond is in sight too, getting me near the halfway point of the whole ride. I feel great tonight, off my feet, well fed and looking for time to sleep a bit longer than last night.

Plus the Yankees are on ESPN; that is a bonus. Thanks again to the sponsors for the trip. Partners in Learning, Fowler Physical Therapy, Vac and Dash, Skinny Wheels, Gear for Races and the Salisbury Post.