Found at the pound, Harley the dog loves open water 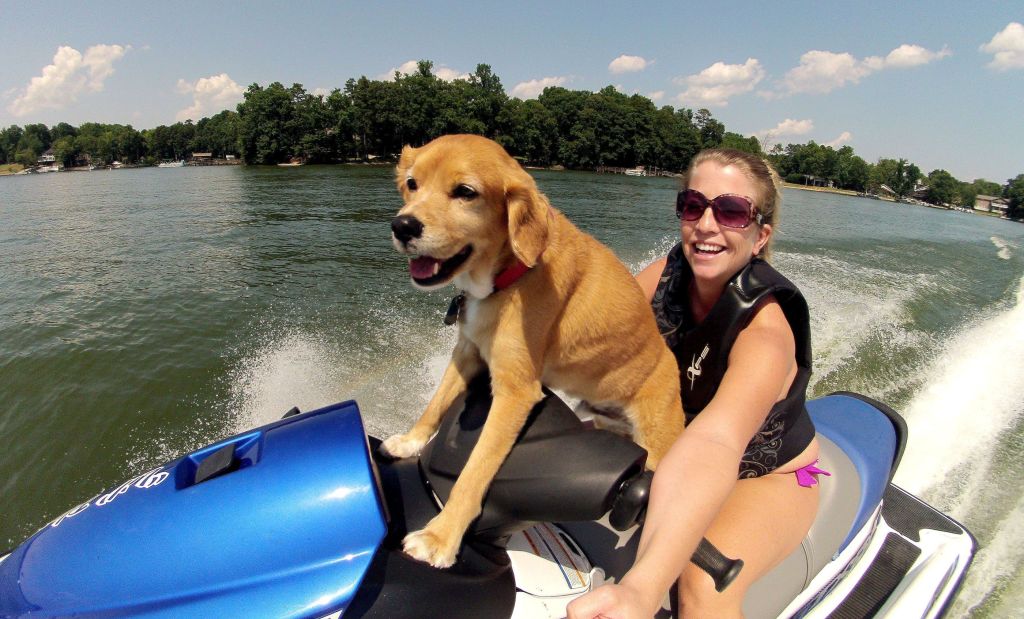 The bow of the puttering Jet Ski turns toward the open water of Crane Creek, leaving the quiet cove lined with houses behind. Even though the water is heavy with boat traffic, Harley and Allison Whitaker appear very comfortable behind the steering wheel of the small watercraft. Harley’s popularity becomes evident after hearing his name called from shore. He sits a little higher in the seat and flashes his broad,. pearly-white smile.

Under throttle, Allison’s hair flows behind her as Harley’s ears wave in her face. Allison and her 9-year-old yellow labrador/spaniel mix spend part of a recent Saturday afternoon cutting through the waves as part of their summer ritual.

The waiting list is long for the busiest dog on High Rock. At 7-weeks old, Harley was first discovered at the Rowan County Animal shelter by Whitaker. The puppy’s cute baby face and friendly disposition caught the eye of several would-be dog owners. But no puppies can be adopted until they reach the 8-week mark. Allison walked away from the shelter in March of 2005 with a smile similar to those parents that grab that elusive video gaming system on a successful Black Friday. No congratulations were uttered from those less fortunate, only hollow phrases like “If you decide you don’t want the dog, give me a call.” Fat chance.

Harley’s puppyhood was much like many other pups, filled with hugs, kisses and, in his case, daily brushed teeth. Whitaker explained that many dogs who suffer from a canine ailment called parvo can have dental problems that can be helped by simply brushing his teeth. Allison soon realized that a regular toothbrush worked better then the special rubber dog tooth brush worn like the finger from a glove. The years of brushing have led to that dazzling white smile that Harley flashes when riding on the lake.

Allison’s parents are Danny and Elaine Whitaker, who live in Anchor Downs. They took care of Harley when she moved to Arizona for a four-year stint in the U.S. Air Force. Making himself at home, Harley would patrol the house at bedtime before retiring on the master bed, settling between Danny and Elaine. Upon her return, Danny had to break the news that Harley was now his. After some discussion, the official relationship between them and Harley is “granddog.”

Just across the cove lives Allison’s grandmother, Rachel Christy, and her husband Chris, who consider Harley as their great-granddog.

Harley is no dummy. When making one of his frequent visits between the grands and the great grands, he would opt for the much shorter trip swimming across the cove instead of walking much further overland. Rachel tells the story that an Anchor Downs neighbor called her once to inform her that Harley was over at their house. More specifically, resting comfortably in the upstairs bedroom after coming through the small dog door on the back of her house.

Harley still has lots of energy left in his 32-pound frame. However, not a day goes by when he does not demand a ride on some kind of vehicle. Like clockwork, whoever arrives back home first takes him for his daily ride around the neighborhood in the car. If he doesn’t get the ride, his mood becomes sour.

By car, truck, pontoon or Jet Ski, he is more than agreeable to be a riding partner. Around the neighborhood and on the water, Harley has become a familiar fixture that brings a smile to those around. Back out on the water, Harley and Allison jumped ship for the slower pace of the grands’ pontoon. On a trip around Goat Island in Crane Creek, Harley hangs off the front of the ship for a closer look at leisure activities conducted by the gathered boaters. When the question is posed about how much it would take to purchase Harley from the Whitakers, the quick reply is, “He’s priceless.”