CNN ‘Hero of the Year’ inspires students at Catawba summit 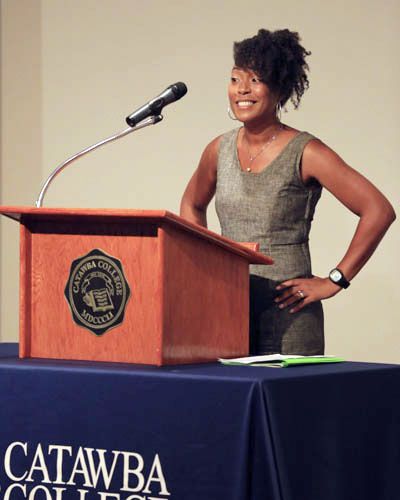 Robin Emmons, founder and executive director of a Charlotte non-profit called Sow Much Good, wants to get young people involved in food systems.
The average age of farmers in the United States is between 60 and 65, Emmons recently told a group at Catawba College, and in 40 years, they’ll be gone.
“Who’s going to grow our food?” she asked.
Emmons was the keynote speaker last week as The Center for the Environment at Catawba kicked off its annual National Environmental Summit for High School Students.
Emmons’ organization, Sow Much Good, seeks to supply fresh produce to low-income neighborhoods in Charlotte. A 2013 CNN “Hero of the Year,” Emmons travels around the country advocating for social equity in food supply.
As the opening speaker for the week-long summit, Emmons shared her story with participants from across the country who were eager to enact change in their own communities.
In 2008 Emmons was working for a bank in Charlotte — a position she’d held for many years. In mid-April of that year, she had a revelation: though her job was stable, she did not find it fulfilling, and she felt that her innate talents and abilities were going to waste.
“[I was] basically withering under the florescent lights of the gray cube I called home for 8-to-10 hours a day,” she said.
So she quit. Shortly thereafter, Emmons got word that her brother, who lived on the streets and suffered from chronic mental illness, was being held in the county jail. Emmons had tried to get him help before but met a wall of refusal. She saw this as a chance to get her brother the help he needed. She began advocating for him and eventually got him placed in a care facility.
For the first time in nearly a decade, she said, he had a roof and was receiving treatment, but then his physical health took a turn for the worse. When she looked at the facility’s food—all canned or packaged—she found the problem. Emmons said she went home that day and converted every inch of her backyard into a garden so that she could donate fresh food to the facility.
Eventually Emmons’ passion grew, and when she looked to the Local Food movement, she noticed that it was impractical and unaffordable for low-income families. So, she sought to change it and has worked since to fill the food deserts in Charlotte and to improve the diets of people in low-income areas or those who are food-insecure. No one, she told the students, wants her kids to eat unhealthy food. To her, access to healthy, fresh food is a basic human right.
“It’s dehumanizing that anyone would be denied such a fundamental need,” she said.
Through hard work, fundraising and campaigning, Emmons was able to acquire five acres, donated to her by local farmers. Later, Martin Marietta Materials donated several acres in the middle of Charlotte that Emmons has turned into an urban farm. Food is grown and harvested by nearly 200 volunteers and then packed up and sold at pop-up markets in low-income neighborhoods across the city. Emmons estimates that Sow Much Good reaches about 26,000 of the 73,000 people in Charlotte who don’t have access to fresh food.
Now, she goes around the country speaking and inspiring others.
Emmons’ talk was followed by a lively discussion with the students who questioned her about the specifics of starting and running a non-profit and the future of her company.
Emmons said that her short-term goal is to scale up her operation to other parts of North Carolina and the U.S. In the long term, she said, she wants to dismantle the unjust food system and put an end to food deserts.
“I want to get on to something bigger,” she said, “like world hunger.”
She continues to donate all of the food grown in her backyard to places that serve people in need, who are unable to even afford the low prices at her food markets. Sow Much Good has recently acquired hoop houses and a few greenhouses, and Emmons hopes that soon she will be able to provide produce year-round.
She encouraged the students to know their strengths and use them. She told them to strive to serve something greater than themselves, to find their path and to start right where they are with what they have.
“You don’t have to have a ton of money,” she said. “You don’t have to have a large amount of people around you. You, the individual, can make a difference.”
The Center for the Environment at Catawba College was founded in 1996 to provide education and outreach centered on prevalent environmental challenges and to foster community-oriented sustainable solutions that can serve as a model for programs throughout the country. For more information, visit www.CenterForTheEnvironment.org or www.CampaignForCleanAir.org.