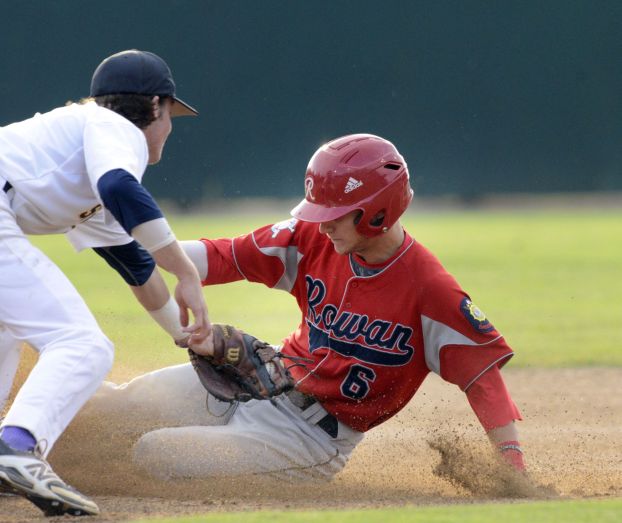 MOCKSVILLE — Shutting out Rowan County in an American Legion game is about as difficult as swimming the English Channel with a cooler of Gatorade strapped to your back, but Winston-Salem’s Jacob Craver accomplished the feat on Sunday.
“I didn’t think anyone could shut us out,” Rowan coach Jim Gantt said. “But Craver was better than our hitters. That’s not knocking our hitters — he was just good and had great command of his pitches. Sometimes you tip your hat and go home.”
Craver, a West Stokes lefty who signed with the Charlotte 49ers, held Rowan to four singles and struck out five in a game played in front of a throng at Mocksville’s Rich Park. Craver walked three, but they were all in the first three innings.
“My command was off early,” Craver said. “But I dialed it in starting with the second inning, and after that, it was kind of set in stone.”
Rowan (24-7) got fine pitching from southpaw Brandon White, who was good enough to win easily most nights. White (3-1) allowed two runs in six innings. Cory Fries and Alex Hamilton added an inning apiece of scoreless relief.
“All of our pitchers threw well enough for us to win,” Gantt said. “They did all we asked.”
Rowan hadn’t been shut out this season and wasn’t shut out all last season. Rowan had scored in 72 straight games before Sunday.
Rowan averaged 10 runs in its first 30 games this summer and had scored in double figures 17 times before running into Craver.
The last time Rowan was shut out was another game at Rich Park. On July 9, 2012, Mocksville right-hander Ryan Foster handcuffed Rowan and won 1-0. Brian Bauk was the hard-luck loser.
“The story of this game was two words — Jacob Craver,” Winston-Salem coach Mike Lovelace said. “He was unbelievable against a great-hitting team. Rowan puts a lot of pressure on you with their lineup, but he limited that pressure.”
White made only a handful of mistakes, but after battling through one jam after another early, he left a pitch up for Winston-Salem’s slugging catcher Hank Niblock with two outs and nobody on in the fifth.
Niblock, a 6-2, 190-pound Louisburg signee who pounded a Connor Johnson changeup for a homer on Saturday at Newman Park, nailed another one, and Winston led 1-0.
“That ball Hank hit went way, way out of here,” Craver said. “That homer got us going.”
Rowan loaded the bases in the third with two outs. Jeremy Simpson and Riley drew walks and Michael Caldwell reached on an error.
That put Bowden at the plate, and that’s the guy Rowan wanted up there, but Craver got him to hit a groundball to shortstop Tanner Lomax for the third out.
Bowden was stranded at third in the sixth . He got on with a bad-hop single and advanced on a wild pitch and Dustin Ritchie’s groundout., but Craven got a called strike three on Luke Setzer to keep the 1-0 lead.
Winston-Salem then worked hard for a run against White in the bottom of the sixth. Gavin Goodson walked, Mike McHugh moved him to third with a double to the left-field wall, and No. 8 hitter Cory Matherly produced the sac fly to deep center that gave Craver a 2-0 cushion.
Craver got one break. Michael Pinkston had a solid, one-out hit in the seventh, and Jones followed with a blistering liner that could’ve given Rowan runners at second and third with one out. Except Drew Fisch stabbed that liner and fired across the diamond to for a DP.
“That was nice,” Craver said. “Good timing.”
There was nothing Jones could do but shake his head over the line-drive double play.
“It was a breaking ball and I sat back and drilled it,” Jones said. “But that was sort of how the night went. I hated it for Brandon. He pitched a great game for us.”
That he did. Winston (15-11) had six hits in the first three innings, but Rowan turned two double plays and Setzer made a diving catch in center to keep it 0-0 for a long time.
Simpson had two hits for Rowan — a bloop to right to break up Craver’s no-hitter in the fifth and an infield hit to start the eighth.
Michael Caldwell forced Simpson in the eighth, stole second and advanced to third on Myers’ flyball to right, but he was stranded too.
“Craver was masterful,” Lovelace summed up.
•••
NOTES: Ritchie hurt a hamstring running to first in the sixth. … Chase Jarrett will pitch for Rowan tonight at Newman Park with the series tied 1-1. Jon Nagle or Dakota DeVine probably will pitch for W-S. .., The idea to play Winston-Salem’s home games at Mocksville’s park worked out well and drew a big crowd that made plenty of noise.