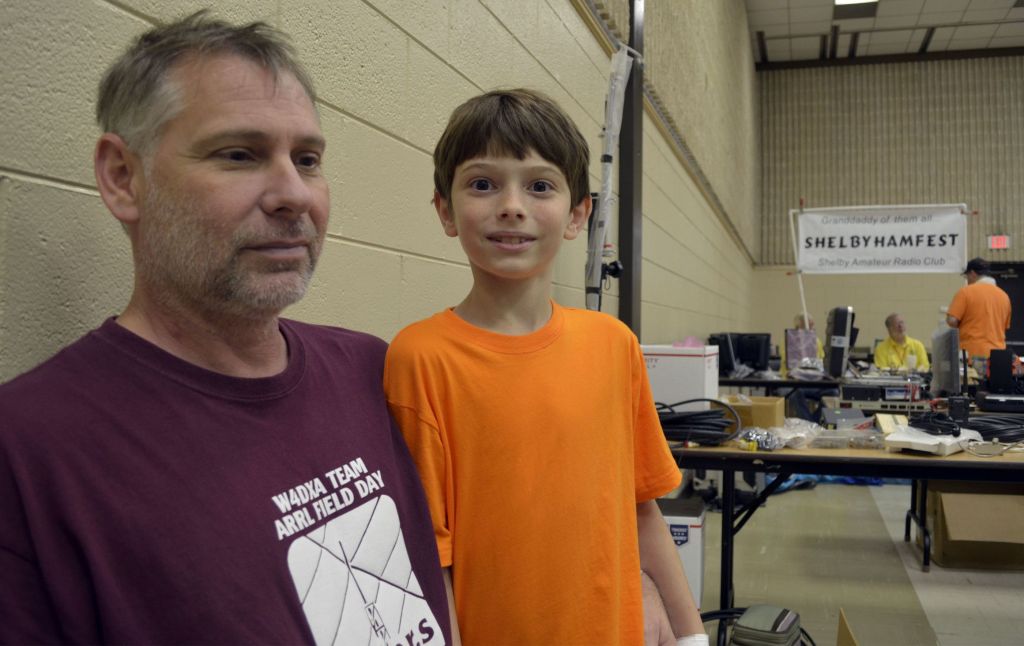 SALISBURY — You could probably tell who was on the way to Saturday’s Firecracker Hamfest at the Salisbury Civic Center.
The rows of cars and trucks with antennas in the parking lot were one giveaway.
Follow the path around the side of the building, and you’d find rows of tents, and tables full of every kind of electronics — high-frequency radios, CB sets and computers.
Inside was a larger electronics bazaar, with antiques, parts and specialized equipment for sale.
One of the largest booths was staffed by Larry Councilman, better known to amateur radio operators by his call sign, WB4WTI.
Councilman and his wife run AC & DC Electronics, based in Guilford County.
“This is what we do for a living,” Councilman said. “We go to 35 or 40 shows a year.”
Glowing on the table around his were oscilloscopes and other testing equipment, plus large capacitors and parts used in radio transmitters.
The Firecracker Hamfest is put on every July by the Rowan Amateur Radio Society, whose members help staff the event and sell refreshments.
Also, specially trained amateur operators with Extra-class licenses — the highest such license granted by the Federal Communications Commission — were on hand to give the test required for those who want to get a license.
Many of those at the show were ham radio enthusiasts. Some, like Councilman, and wore badges with their call signs and the names of the clubs to which they belong.
“This is an excellent small show, is what you can say about it,” Councilman said.
At any hamfest, he said, “you’re probably going to meet people that’s in or doing something with electronics, not necessarily just radios.”
At a nearby table, Rose and Alan Batson sat behind a table full of antique vacuum tubes.
In a world of microchips and transistors, those tubes are getting harder to find.
Some are still made overseas, Rose said, but most of the boxes at their booth contained new or lightly-used tubes from the old days.
Though somewhat worn, their boxes still blazed with names like DuMont, Raytheon and Radio Corporation of America — better known today by its initials, RCA.
Alan Batson said they decided to come to the Salisbury hamfest after attending ones in Cabarrus County.
Tubes are still highly sought-after by those with antique electronics, Rose said. “Some people still have the old TV’s, the old radios. They restore them.”
And by coming out to the events, “you meet interesting people from all over,” she said.
Outside the testing room, Darren Clark and his daughter, Molly, waited for Molly’s uncle, Don Bulla, to take the licensing exam.
Gary Lang, of the Rowan Amateur Radio Society, said that out of the 10 people who took the test, nine passed.
Within the next few days, they’ll be given a call sign and license by the FCC, and can start operating on the air.
Bulla actually took, and passed, two tests that morning, he said — jumping past the novice’s Technician class to a General-level FCC license in one go.
That’s not unheard-of. The tests on radio operation, FCC laws and the scientific theory behind radio are easier now than they once were, as many longtime operators will gladly point out.
For one thing, you no longer have to know Morse code to get a radio license.
Bulla, who lives in Star, said he’d gotten interested in radio because of a friend who’s involved in the hobby, and also because radio is a tried-and-true way of communicating in emergencies.
As for Darren and Molly, who drove from High Point, they took time to walk through the exhibit hall and see everything on display.
“I was surprised to see all the old stuff, the old technology,” Molly said.
Bulla said he was impressed by his first time at a hamfest. “The people are awesome, and there’s a lot of stuff here,” he said.
The youngest licensed radio operator at the event was Nathan Sossoman, 10.
He’s the third generation of Sossomans to have an amateur radio license, his father, Eric, said.
“My dad was licensed back in ‘54. He was a big-time DX’er,” Eric said — radio slang for an operator who talks over long distances.
“You know, five bands, Extra class, all countries,” Eric said. “We had three (antenna) towers at the house!”
Eric got his license in 1991. When his father passed away seven years ago, Eric said, he requested to take over his father’s call sign, K4CEB.
“That was a big thing,” he said.
Meanwhile, Nathan has been coming to the Firecracker Hamfest in Salisbury for two years. He wanted to be able to operate the radio, just like his dad.
“I’ve been thinking about it for pretty much as long as I can remember,” Nathan said.
“And this year, I finally took the test. And well, I passed,” Nathan said, smiling. “I only missed one question and that’s because I second-guessed myself.”
When Lang took the microphone to welcome guests to the hamfest, he called Nathan to the stage and told the crowd about his accomplishment. They applauded and cheered.
“I grew up with this as a kid,” Eric said, as he and Nathan took a break and sat down at their family’s booth. “Nathan’s kind of doing the same thing.”
“You have people from all walks of life,” Eric said. “My dad was a mailman. There’s a guy in the Charlotte club who worked for NASA.”
It’s a close-knit community, and one that welcomes everyone, Eric said.