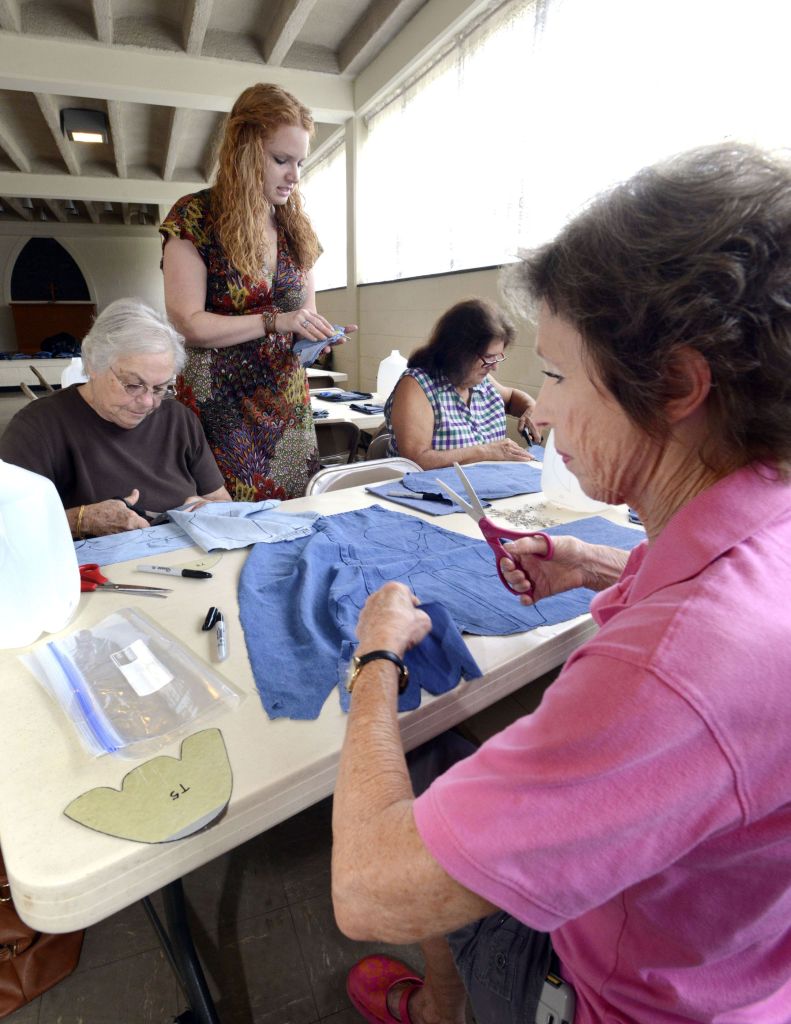 A little over a dozen members of St. Peter’s Lutheran Church chatted Saturday morning as they sat around tables in the church’s basement cutting pairs of jeans into pieces that will eventually become shoes for Ugandan children.
Sole Hope uses shoes to provide jobs and medical relief in Uganda.
“We enjoy the fact that people can be hands on,” said Holly Jones, Sole Hope’s United States office director. “It’s rewarding and it’s fun — it’s a craft. Who doesn’t like a craft?”
Sole Hope was initially based in Asheville, but on June 1, Jones moved the nonprofit’s U.S. office to Salisbury.
Jones is a 2005 South Rowan graduate, and she graduated from Western Carolina University in 2009.
She began working with Sole Hope as a volunteer from the organization’s beginning. She continued as a volunteer for two years, and then served as the assistant to the director for a year and a half. When the director moved to Uganda in January of 2013, Jones became the U.S. office director.
Jones is working out of a temporary office now, but hopes to move into the nonprofit’s permanent location on Lee Street by mid-August.
The organization’s Ugandan headquarters is in Jinja, the nation’s second largest city.
“Everywhere we work is within five hours of there,” Jones said.
Volunteers in the United States and throughout the world cut pieces of denim to match patterns. Those pieces are sent to Uganda, where local men and women are employed and paid by Sole Hope to make shoes out of the denim and recycled tires.
Once the shoes are made, Sole Hope staff and volunteers hold medical relief clinics in the area around Jinja.
Children come and have their feet inspected for jiggers — sand fleas that embed themselves in the bottom of the children’s feet. Once they’re in there, a blister forms, making it incredibly painful to walk on.
If jigger-free, the child’s feet are washed and they’re given a pair of shoes.
If not, their feet are soaked in peroxide, which suffocates the parasites. Then, the children move on to a separate station, where the jiggers are removed and their feet are bandaged. After that, the children are given shoes.
They use safety pins to remove the jiggers “because that’s how they’ve always done it,” Jones explained. “We don’t want to change anything in their culture.”
The Sole Hope team keeps records of each child, how many jiggers they had and where.
The Sole Hope team continues to visit the village, providing follow-up medical care and education, until the village is jigger-free.
“It’s a super simple concept — it’s just that they’ve never been taught,” Jones said.
Last year, the nonprofit held 92 medical clinics and removed more than 13,000 jiggers. This year, they hope to double that number.
“When I saw the pictures of the children’s feet with the jiggers in them, it just broke my heart,” said Carla Shenk, who helped organized the event.
Church member Laurie Olive said she felt the project was a worthwhile one.
The group at St. Peter’s was enthusiastic about the project.
“People are trying to find things to do to give back to society,” she added.
Molly Blackwell was sitting at Olive’s table, cutting out denim pieces and helping several of the children sitting nearby.
“I think it’s something easy that a group of people can get together and do,” she said. “We made it a family and church thing.”
“I hope this is going to be an ongoing project for St. Peter’s,” Shenk added.
Jones said shoe-cutting parties are a popular way to volunteer with Sole Hope.
Each week, she sends out 40 party kits to locations across the United States. She’s also had requests in Canada, Australia and Japan.
In addition, volunteers can help out at the nonprofit’s office in Salisbury.
Sole Hope also has financial needs, which are met through donations and merchandise sales, such as baby shoes and water bottles.