Is the Mecklenburg Declaration the real deal? 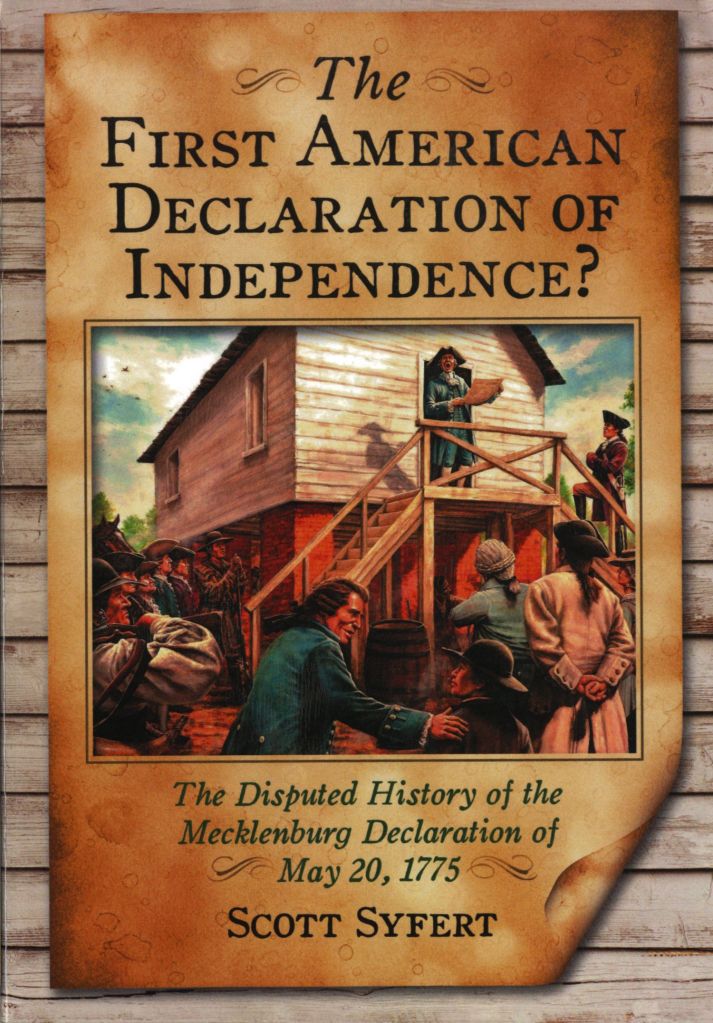 “The First American Declaration of Independence? The Disputed History of the Mecklenburg Declaration of May 20, 1775,” by Scott Syfert. McFarland & Co. 2014. 247 pp. $35.
Scott Syfert is an attorney, so uncovering evidence is right up his alley. He’s tenacious, too, and that’s why he spent 10 years digging to find out if the Mecklenburg Declaration of May 20, 1775, was real or rumor.
The definitive answer can be found in his book, “The First American Declaration of Independence?” and it’s a doozy.
There is no definitive answer. There’s little hard evidence of the document’s existence — no copy has survived. It made the same bold statements as the declaration we know from 1776, and it was prompted by news of the battles in Lexington and Concord, Mass., over taxation. The news of the April events did not reach North Carolina for a month, but it fired up citizens who were living freely, without any help from the king, and wanted to maintain their independence.
If you believe the Mecklenburg Declaration existed more than a year before the Declaration of Independence, you’ll find Syfert’s arguments most compelling. If you think it’s a bunch of bull made up by some backwoods rabblerousers, you’ll still think that, Syfert argues.
“The story has not died in 250 years,” Syfert says. “Why does anyone care anymore? What’s at stake? Why are people so animated about it?” The May 20, 1775, date is part of North Carolina’s flag to this day.
Syfert ended up in the May 20th Society in Mecklenburg County, where he practices law. Syfert doesn’t remember hearing the story before then. They were working to install a statue of Capt. Jack, the courier who took the 1775 declaration to Philadelphia. The statue is part of a series in Charlotte devoted to local history. Syfert researched Jack and wrote something for the group’s website, then he ended up becoming the regimental historian and “had all this research on the coherent points, all this fragmentary research.
“I’ve always heard you should write the book you want to read. That’s what I did.” He describes the trail as totally non-linear, because stories about what some believe to be the first declaration of independence were rampant at one point, then they died down; 150 years later, Moravians pick it up again.
“To me it was a detective story,” he says. He read Thomas Jefferson’s papers and learned of a heated debate between Jefferson and John Adams over the declaration. In 1819, after seeing the MecDec, Adams accused Jefferson of plagiarizing it. Jefferson called the declaration from Mecklenburg “spurious.” This brought the debate into the national spotlight, where it stayed for quite a while.
Syfert said his research became like putting together all the legal arguments that would support the existence of the Mecklenburg Declaration.
“The story has so many levels to it. The pure history, what happened in Mecklenburg County and Salisbury at the time. The stories go dormant, then the Jefferson-Adams debate comes up and you have North Carolina rising in anger against Jefferson.”
There were public celebrations of the MecDec for hundreds of years, Syfert says. The date is on the flag. “Then you have the evidentiary arguments. Where is the evidence? How good is it? You have 19th century historians pooh-poohing it.
“History is selective, not necessarily factual. This illustrates it perfectly.” We only know the survivors’ version of history.
The papers, the original and copies of the MecDec, were lost. John McKnitt (or McKnight) Alexander is credited as the author during a meeting of militia leaders who wanted to decree Mecklenburg as free and independent. Some say the declaration never existed. McKnitt was long dead when the questions were asked and some of his property burned. “What if the papers were not lost? My theory is if someone found in their attic a copy of the MecDec next week, it wouldn’t change anyone’s mind anyway.”
The declaration was drafted by a small group of people in a very isolated place. Salisbury was far larger, and it was tiny. There were few settlers but those who were there were a strong group of Scots-Irish Presbyterians. “It’s a lot more plausible, if anyone in America did it, it would be these people who would take action,” Syfert says.
After he had done all the research, Syfert was ready to present it in the form of this book. He’s struck a chord, selling more than he ever expected, “to people with an interest in local history, to the descendants of the Alexanders and others, to the local business and civic community to the chamber of commerce. The famous, or infamous Capt. Jack has 500 descendants spread all over.”
Syfert says one of most interesting aspects is “how can something so important to the community be completely forgotten. Imagine not celebrating the 4th of July because no one cares.” His theory about Charlotte tearing down so much history is that it represents a dark time, unpleasant circumstances. It’s no coincidence, he says, that the state seceded from the Union on May 20, 1861. It was to celebrate that May 20, 1775, independence.

You can continue the argument about the Mecklenburg Declaration on Saturday, July 19, from 11 a.m.-1 p.m., when he will be at Literary Bookpost & Just the Thing to sign his book.