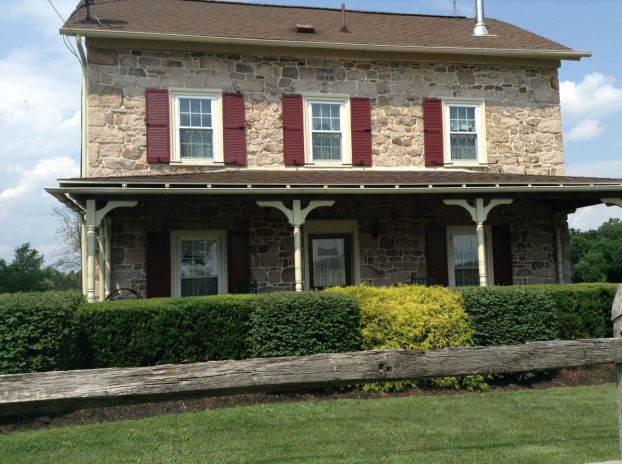 I finally got in the bed last night around 11:15pm, way too late to keep up the physical pace that I am on. Several times during the night, I woke up and worried that my plan to go to Delaware today was the wrong one. After probably an hour of planning last night, I ended up throwing it away this morning and moving on to another one.
This was my daughter Amber’s birthday, so a call to her and a stop at the grocery store were first on the list this morning. My early miles were dragging, but then several surprises happened. My first main road was Hwy. 202 South, one of the main roads from the day before. After just a few miles, the road went back to four lane and the pace quickened. Next, a first class bike trail started to run right beside the highway. Lots of folks in the area were cycling, running and walking. The paved trail went on for 8 miles. I am sure that such a trail at home would be fantastic too.
I rolled into the Conshohocken area and joined back with the Adventure Cycling maps. First on the agenda was more than ten miles on the Schuylkill River Trail. I got off of it at Valley Forge. My plan was look around some, even though I had been there before. They have bike paths in the park too, but most are made for mountain goats, not loaded touring bikes. When it was time to leave the park, I made a huge blunder and turned the wrong way. After riding about 2 1/2 miles the wrong way, I asked a local resident what I had done wrong. He explained the proper choice for me to exit the park, and even drove ahead to make sure construction road work would not hinder my ride. He came back by me and had a big thumbs up out the car window. I continued on the right track, but knew that I was way behind on time and mileage.
The only way to catch back up with the Adventure Cycling maps was to do some seat of the pants planning and make a shorter route. I chose to take Hwy. 23 to eventually end up in Reamstown, Pa. where I could again join up with Adventure Cycling. I stopped and got a huge Diet Mountain Dew and two packs of king size Reese’s Cups. That is my maximum energy fuel when I know there s some hard physical work to do ahead.
I am a believer in the statement about “a wild hog finding an acorn.” Today was one of those days. Highway 23 turned out to be one of the most beautiful roads I have ever ridden, and that says a lot considering the trips though Oregon and Montana last year. Hwy. 23 West out of Valley Forge starts out by passing endless Revolutionary War era houses and buildings. Then it begins to transition into farms with homes built in the late 1700s and 1800s. I was surrounded by history. The road was not particularly hilly and there was not a lot of traffic.
Next Highway 23 started to become Amish farmland, some of the prettiest farms ever. They were baling hay and rain threatened for awhile. Thinking all the time time that I had a long way to go to Reamstown, I had to push the pace. Jim Shankweiler of Elverson, Pa. helped me come up with a plan.
I got help from Bret and Cindy at the grocery store near Goodville and headed off to ride through the Amish farmland for a ten mile ride at dusk. This was the most rewarding thing that I have done so far on this adventure. When the printed out directions didn’t look right, I stopped at a house to ask which direction to go. No one came to the door, but I noticed an Amish lady walking up the road while pushing her bicycle. I asked her and she assured me that the printed directions were not correct, and told me how to proceed. Along the way, I saw Amish teens walking and biking places, and little kids out playing in the yards even as it got dark.
When I got to town, I couldn’t find the motel. I stopped in a housing develop and knocked on a door, and soon had help from Jill who told me how to find it. Turns out that the Red Carpet Motel had a huge sign that still said Red Roof.
Another very long day turned out to be successful. Total mileage for today was 90 and had some challenging climbs. Right now, I rate it as the best overall day but the wrong turn and struggling to find the motel made for a long day.
Tomorrow, I will head toward Washington, D.C. I have not planned anything yet, but hoping go into the city. It looks like I may get to ride along the Potomac. Another early morning comes soon.