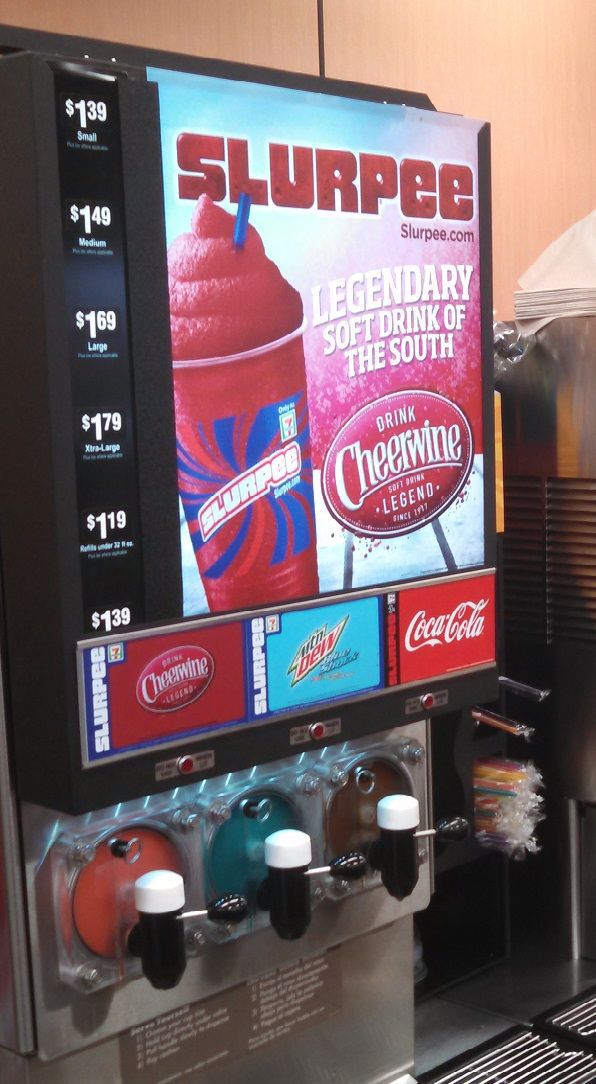 Cheerwine Slurpees on sale at 7-Elevens

SALISBURY — Reports of brain freeze have risen sharply in the Carolinas this summer with the introduction of the Cheerwine Slurpee at select 7-Eleven stores.
The frozen treat is similar to the slushies that Rowan County residents have enjoyed for years made from the drink based in Salisbury.
The Cheerwine Slurpee rollout comes on the heels of Cheerwine Icee appearing in select Walgreen’s locations, amusement parks and other retailers in the Carolinas.
“Consumers have long craved a frozen version of Cheerwine, and we’re fortunate to have two great partners in Icee and 7-Eleven to help make their dreams a reality this summer,” said Dan Martin, Cheerwine’s vice president of food service.
Martin said Cheerwine plans to expand the frozen beverage offering to other markets, part of the brand’s drive to gain new fans as it looks to secure distribution in all 50 states by its 100th anniversary in 2017.
SALISBURY — Lazy 5 Veterinary Hospital has opened an expansion building with several additions, including multiple exam rooms and a full-service boarding and grooming facility called Camp Wagon Tails.
With the expansion, Lazy 5 can house more than 120 pets.
Dogs and cats now have several levels of boarding from small bungalows to luxury cabins and condos. The boarding area is equipped with safety features like sprinklers, a CO2 detector and an emergency back-up power generator.
Cats owners can choose between upscale kitty condos with private play areas and a one-of-a-kind saltwater aquarium view or two-level luxury kitty condos with outdoor viewing windows.
Pets have the option of two 15- to 20-minute play times at Camp Wagon Tails in either indoor or outdoor play areas.
Owners can have their pets take a quick temperament test to allow them to take part in playgroups held in a controlled, supervised environment.
This is Lazy 5’s second building upgrade since the business was acquired in 2005. Carlos Moore Architecture designed the upgrade, which was built by Liles Construction.
For more information or to schedule appointments, visit lazy5vets.com or call 704-636-1100.
SALISBURY — Emma’s of Salisbury will celebrate its one year anniversary Wednesday, just a few days after the launch of the restaurant’s new dinner and brunch menus.
The restaurant at 209 S. Lee St. is located in a building that was once a crack house, but owner Allen Terry saw a diamond in the rough.
With help from a $70,000 Main Street Solutions grant from the state, Terry renovated the 140-year-old Victorian cottage.
Emma’s of Salisbury is not only a place to dine, it’s also become a venue for a range of events from bridal and baby showers to book club meetings.
Daimler has introduced the world’s first autonomous truck, a specially built Mercedes-Benz Actros 1845 designed to run without the active participation of a driver, according to Land Line, a magazine for professional truckers.
Daimler recently demonstrated what it calls Future Truck 2025 to 300 journalists from more than 30 nations on a new, unopened section of autobahn near Magdeburg, Germany. Daimler Trucks North America, a division of the company, owns the Freightliner truck manufacturing plant in Cleveland.
Daimler executives at the July 3 introduction made it clear that the autonomous truck is not expected to be on the market until 2025, when they hope traffic laws will have been amended to allow for such vehicles, Land Line reported. They say autonomous trucks will be more fuel efficient and safer than today’s trucks, but Daimler never used the expression “driverless” in the elaborate introduction, according to LandL Line.
?Submit information about new businesses, honors and management promotions to bizbriefs@salisburypost.com. Include a daytime phone number.