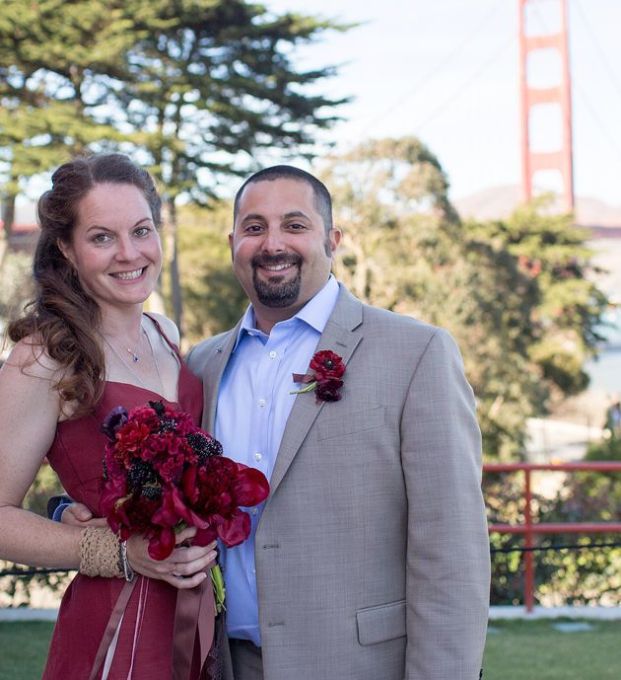 SAN FRANCISCO, Calif. — Amy Jessica Wilson and Alan Benjamin Valensky were united in marriage Nov. 16, 2013, at a ceremony overlooking the Pacific Ocean surrounded by family and close friends.
The mid-day ceremony was officiated by the groom’s brother-in-law, Jeff Simon. An evening reception was held at Trocadero in Stern Grove.
Attending were the bride’s cousin, Kate Parsons of London, England, along with Richard Corso and Don Laliberte of Providence, R.I., and R.J. Wafer of Brooklyn, N.Y. Scott Schulman of San Francisco was best man.
Kimberly Hales of Charlotte, N.C., best friend of the bride, served as witness, and Tara Sullivan of Chicago, Ill., dear friend of the bride, was reader. Chuppah attendants were Noah Simon of Encinitas, Calif., Isaiah Simon of Encinitas, Calif., Maya Van Horn of Madison, N.J., and River Bernick of Charlotte, N.C.
The bride is the daughter of Donna and the late Jon R. Wilson of China Grove, N.C., and the granddaughter of Pat and the late Clarence “Bud” Winchell of Salisbury, N.C. Her grandmother attended the wedding virtually with the assistance of the bride’s brother, Scott Wilson of St. Louis, Mo. A 1995 graduate of South Rowan High School, she earned her bachelor’s degree at Warren Wilson College and her master’s degree at Naropa University. She is an event producer.
The groom is the son of Jack and Anita Valensky of Oceanside, Calif. A 1991 graduate of Westchester High School in Los Angeles, Calif. he received a Bachelor of Arts in Broadcast and Electronic Communication Arts from San Francisco State University. He is also an event producer.
The couple honeymooned in Belize and live in San Francisco.

Jerry Stokes Smith and Phyllis Short Smith of Spencer, celebrated their 50th anniversary with a trip to the mountains in... read more