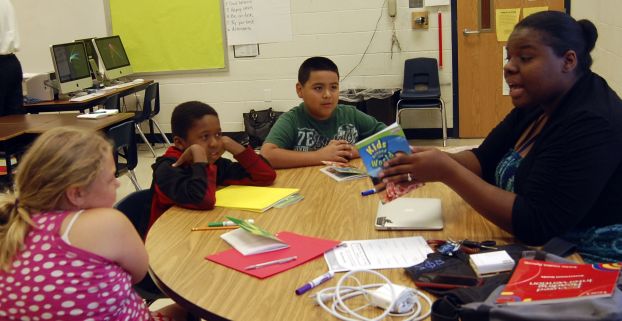 Rowan-Salisbury Read to Achieve summer camps began Tuesday and Kannapolis will start its version next week, but not without changes from state legislators.
The camps are for third- grade students who were not able to prove reading proficiency through their end-of-grade tests or other approved assessments.
This year, the state enacted the Read to Achieve program, which tested students on 12 crucial areas of literacy called standards. Students proved their understanding of the standards by taking tests on a selection of reading passages throughout the year.
Students who did not receive a passing score in reading on their end-of-grade tests, but passed enough reading passages or the Read to Achieve test administered at the end of the school year, they would be able to go on to the fourth grade.
Those students who were unable to satisfy the requirements of these exams still have one more opportunity to advance to the fourth grade by going to a Read to Achieve summer camp.
In the Rowan-Salisbury School System, five camp sites offer a total of 35 classes for the program. The host sites are geographically spread out across the county. The elementary schools hosting this year’s program are Koontz, Cleveland, North Rowan, Shive and Landis.
The Rowan-Salisbury district has 356 students participating in the program this year, with each school holding between five and 12 classes with less than 10 students per class.
Kannapolis City Schools will operate out of just one location, Shady Brook Elementary School. The district has ensured staffing for the 115 students who will be attending this year’s camp by providing 11 classroom teachers, three exceptional children teachers, two administrators, five tutors and two custodians. In addition, because 61 percent of Kannapolis students are enrolled in English as a second language, three ESL teachers and a Spanish interpreter will be on hand as well.
Both districts had fewer students decide to attend than they expected.
“Our camp is smaller than we expected, which is a good thing,” said Kannapolis City’s Director of Title I and Elementary Education Patty Williams.
Alesia Burnette, executive director of elementary education for Rowan-Salisbury, said that the district had expected 700 students to participate.
“We based our estimates on prior years,” said Burnette.
Both Williams and Burnette pointed to the other tests and assessments students were able to use to prove their reading proficiency.
With changes to the new state law concerning the program both Rowan-Salisbury and Kannapolis City opted to shorten their camps from six to four weeks.
Previously the state had required the camps to run for a minimum of six weeks with at least 72 hours of educational time. Under the new law the new requirement is just three weeks with 72 hours of educational time.
The Rowan-Salisbury and the Kannapolis City camps are Monday through Thursday. Both counties will operate from 8:30 a.m. to 1:30 p.m.
Parents are still encouraged to send their children to these camps, but the new state law no longer makes this a requirement.
Students who are in need of additional help are now given the option to receive tutoring from a licensed tutoring company and retake the Read to Achieve test at the end of the summer. Students who pass this test will be able to move onto the fourth grade.
Students who choose to go this route, however, do not have access to their portfolio passages and can only use materials the tutor provides.
Williams said the tutoring option was explained to Kannapolis parents at two separate informational meetings and also sent written notification home to students affected by Read to Achieve in English and Spanish.
Burnette added that Rowan-Salisbury parents were notified of the same information upfront.
The new law also points out a third item that students who pass the end of grade test but still need additional literacy help can attend the camp. Depending on each individual district however this may come at a financial cost to that student.
The law related to the end of grade test and Read to Achieve program has been in constant fluctuation since its inception earlier this year.
“It’s brand new,” said Burnette. “The idea of the law is still the same,” but state legislators listened to feedback and made changes accordingly.
Williams said if a Kannapolis student completes their reading portfolio before the conclusion of camp, the child’s parents can choose whether or not their child continues to attend.
“(The students) would not have to come back to summer camp, because they would not have to take the test at the end,” she said, but added, “They can keep going if they want.”

A good night’s sleep didn’t fix my dilemma on how to proceed through the rest of Connecticut today. I had... read more