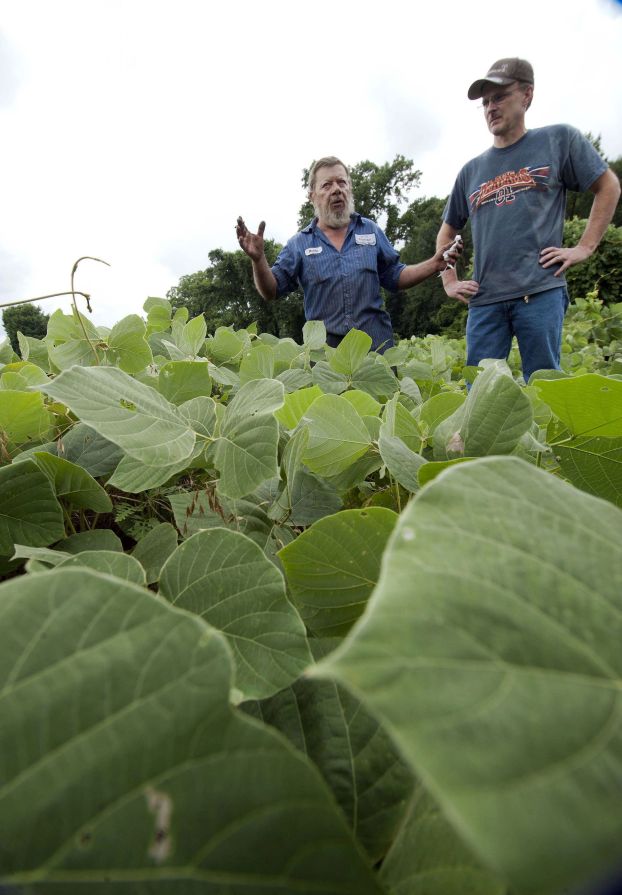 SPENCER — Snakes and rats and woodchucks, oh my.
Two business owners in Spencer say they like the idea of using goats to clear kudzu from a large gully, but they’re concerned about where other hungry critters who live in the gully might go when their habitat has been chomped.
Buddy Barringer and Doug Ray, who own businesses in the 1200 block of South Salisbury Avenue near the kudzu-infested gully, said they’ve seen snakes, rats and 15-pound woodchucks living there. The gully is part of Spencer Woods, which the town and Land Trust are turning into a park and ecological preserve.
The town board on Tuesday agreed to pursue the novel approach to kudzu control. If approved, the Land Trust would rent six goats for about four weeks two or three times to eat the nuisance vine and other invasive plants.
Ray, who owns Spencer Cycle, said he believes as many as 100 woodchucks, also know as groundhogs, live under the kudzu. Many are the size of small dogs, he said.
“Our biggest concern is where are these things going to go,” Ray said. “They will find their way to the next kudzu patch, which is behind the carwash next to me.”
While the woodchucks are docile — both men have come within feet of one — they can eat through wood and do a lot of damage in a short amount of time, said Barringer, who co-owns Piedmont Radiator Works.
“They are pretty as they can be when you see them stand up,” said Barringer, who has been entertained by the woodchucks since he opened his shop in 1971.
At least 20 burrows with entrances as large a one foot across can be seen in the winter when the kudzu dies off, Barringer said.
The rodents grow fat and happy living in a woodchuck nirvana down in the gully, where a creek provides fresh water year-round and they feast on both vegetation and small animals, Barringer said.
While Barringer and Ray support the town’s interest in using goats rather than chemicals to battle kudzu, they would like aldermen to have a contingency plan in case woodchucks and other critters migrate to nearby homes and businesses.
Town Manager Larry Smith said Spencer and the Land Trust are still in the early stages of planning. He encouraged anyone with a concern to call town hall.
Jason Walser, executive director for the Land Trust, said he had not thought about potential problems with animals leaving the gully until the business owners brought it up.
“It’s not something that we have considered, but we are very much open to talking about it and inviting the neighboring businesses to talk with us,” Walser said. “Maybe there is some way that we can direct the wildlife another way.”
Most likely, Walser said, any animals currently living in the gully would move into other areas of Spencer Woods, which measures more than 42 acres.
After years of kudzu infestation, the gully needs to be cleared as the Land Trust and town start to develop the park, Walser said. Plans call for a public entrance to Spencer Woods, also called Stanback Forest, near the nursing home, and a long-term dream includes a new building of some kind in the area.
“Once we get rid of the kudzu, we’re not entirely sure what we will find under there,” Walser said. “Getting rid of the kudzu is the first of many steps to reclaiming that site so it can be used by the public.”
The Land Trust, which helped Spencer win $400,000 in state grants to buy the forest and fund a master plan for trails, observation platforms, bridges and more, has other grant money and anonymous donations to fund the goat-eat-kudzu program.
Up to three “treatments” by six hungry goats will cost a total of about $5,000, Walser said. That includes the livestock and a temporary shelter and fencing.
In more rural settings, the goats arrive with one or two guard dogs to protect them from predators and people. But inside town limits, people will watch over the goats instead, Walser said.
“We don’t want barking dogs next to a nursing home at 3 a.m.,” he said.
Land Trust staff and community volunteers will rotate to check on the herd several times a day while the goats are at work.
The goats would arrive this fall for their first four-week shift. While the timing is important — the first grazing should happen before the first freeze — the goat project could wait another year if needed, Walser said.
Goats are proven effective at controlling kudzu, he said.
“And there is no harmful spray that would kill other wildlife,” Walser said.
Contact reporter Emily Ford at 704-797-4264.

SPENCER — Fed up with an ongoing disagreement with the U.S. Postal Service, Spencer aldermen are considering a ban on... read more