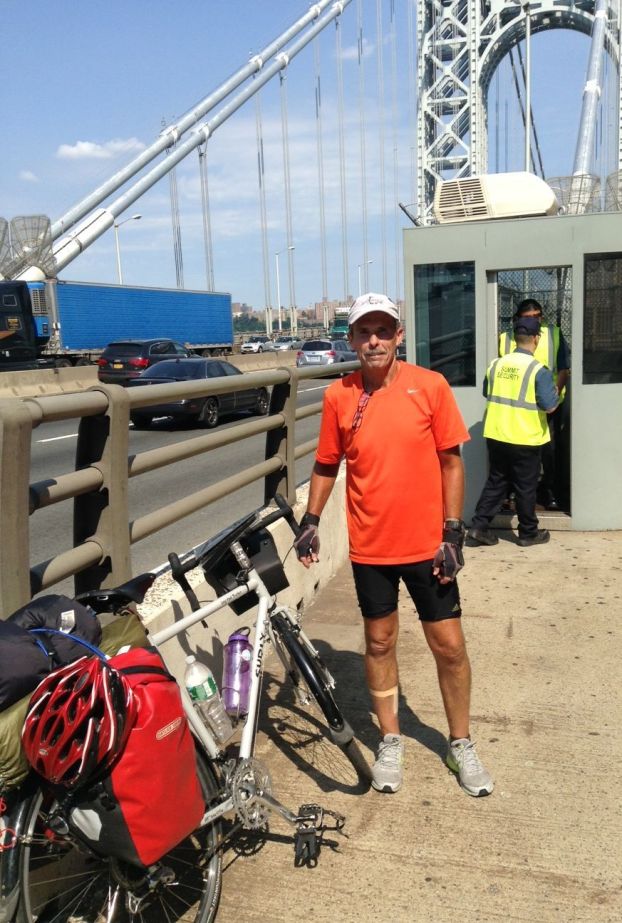 For the last few days, I had hoped to visit New York City on a bike. I didn’t want to worry people, but I wanted to give it a shot. Tne way to do that was to go to Brewster, N.Y., and ride a 53 mile rail trail all the way to the Bronx. That was a huge undertaking and I had a feeling that there were going to be some ups and downs. As it turned out, mostly ups made it a great day.
I got an early start from Mill Plain, Conn. and cruised on into New York State. It was about nine miles over to Brewster, where the start of the rail trail to New York City is. I hit the trail and soon had Daniel Fritsche of Carmel, N.Y., riding with me. He told me a little about what to expect on the ride today.
Things started off very well with a cool morning and much less hilly riding. But just less than 20 miles into the beautiful trail, I started seeing people coming back toward me saying that downed trees had blocked the way. I believed that I could possibly get through, so I rode on. But the trail was blocked so much that I had to return to the latest access point and find a way back to the trail past the damage. With help from at least two local residents, I got back on track and rolled on. All I could think about was the fact that I was losing time in the city with these delays.
On and on I went. The trail abruptly ends several times and I had to find how to continue. The paved trail became dirt as I neared the city. George Pickel, a NYC PE teacher rode up beside me and we talked a little, with me asking questions. George rode on, but later returned and led me on a very quick ride through the Bronx to the Hudson River bikeway. It was fun to follow an experienced city bicycle rider through the some very busy streets. George was fantastic and I will always remember his welcome to my NYC bike trip.
I rode along the Hudson River for a little ways, and thought that I needed to figure out how to cross the George Washington Bridge. Since the bridge is so big and heavily traveled, they have a specific place for bicycles and pedestrians to cross the bridge. We were not exposed to traffic at all. The sight of the greatest city in the world from that bridge was amazing, so amazing that I missed the “Welcome to New Jersey” sign.
After coming off the bridge, I went to Strictly Cycles bike shop to get some idea of how to exit the congested New Jersey area. Vito gave me a suggested course, and I left hoping to make good time with it. First thing, I went back up on the bridge and got my picture of New Jersey sign. With a big storm brewing, I decided to see about getting a room. I was told that the only motel in the Palisades area was a Day’s Inn, so I went there and asked about the price and availability for the night. When the clerk told me the price and said that I couldn’t take the bike into the room, it was time to go. The price was ridiculous in itself, and he told me that the nearest place to get food was at the liquor store.
Didn’t seem like my kind of place.
Then my second hero of the day showed up. Alex Yu told me about a series of motels on Grand Avenue. One that he thought might work was near a 7-11. I pedaled off to find it, and had just about given up when Alex drove up. He ended up taking me to check on some others, but we went back the one that he originally suggested. It is a different kind of motel than my usual, but way better than most in the area. I am comfortably settled in North Bergen, N.J., after 83 miles today.
Tomorrow, I will head south toward Pennsylvania and try to get out of the congested traffic of New Jersey. It was a tremendous day, much of it loaded with uncertainty. Everything worked out, and once again a lot of prayers got answered.

A good night’s sleep didn’t fix my dilemma on how to proceed through the rest of Connecticut today. I had... read more