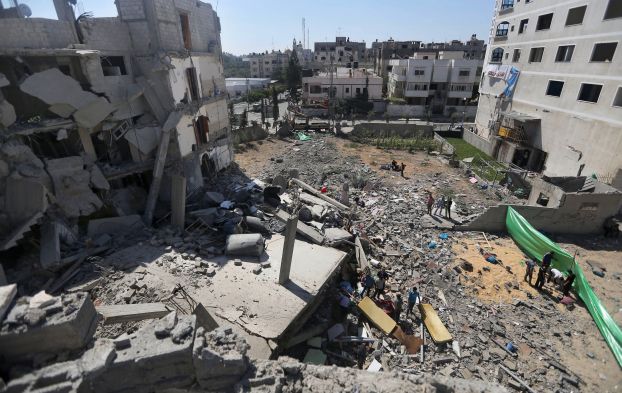 Your daily look at late-breaking news, upcoming events and the stories that will be talked about today:
1. ISRAEL IS HIT BY LEBANESE PROJECTILE IN OFFENSIVE’S 4TH DAY

Lebanon’s National News Agency says two rockets were fired from the country. No one immediately claimed responsibility for the attack.

2. WHERE US DIPLOMAT HAS LANDED

3. U.S. WAS GIVEN HEADS UP ABOUT NEWSPAPER DATA DESTRUCTION

4. MILITARY BRASS: NO "STAND DOWN" ORDER IN BENGHAZI

Testimony of nine officers undermines contentions by GOP lawmakers that an order held back military assets that could have saved U.S. Ambassador Chris Stevens in Libya.

5. DOWN AND OUT WITH "NORTH KOREA’S MATA HARI"

A year after finishing a five-year espionage sentence for using sex to obtain military secrets and plotting to assassinate intelligence officers, Won Jeong-hwa is 40, single and eking out a living with her 12-year-old daughter.

The euphoria over a reform letting Cubans buy vehicles without a permit turns into bitterness when the likes of a six-year-old Peugeot compact are offered for $85,000.

In addition to producing energy, highways paved with photovotaic cells can melt away snow and ice, and display warning messages with LED lights. It may sound outlandish to some.

According to a large trial, the most advanced vaccine for the disease only offers modest protection but could still help millions of people avoid the devastating effects of "breakbone fever."

9. WHO RELUCTANTLY RALLIES BEHIND ARGENTINA

Most Latin Americans will put aside their disdain for their proud neighbors as they look to Lionel Messi and his teammates to salvage what’s left of the region’s soccer pride.

"The Decision II" holds fans in thrall as the Miami Heat star ponders where he’ll take his talents next.