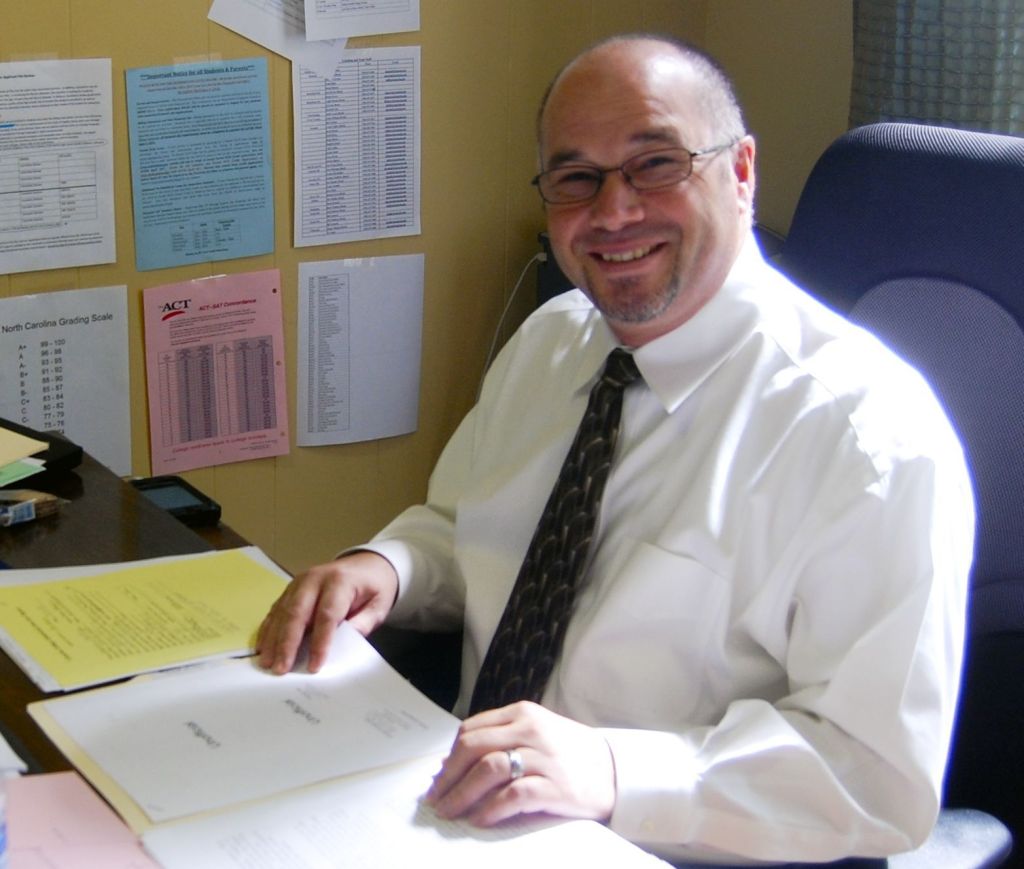 David Jones, a 2014 Catawba College graduate, wasn’t your traditional college student — in addition to being a commuter, he was nearly 20 years older than all his peers.
But that didn’t keep him from getting actively involved on campus during his time at Catawba.
“Catawba let me get involved even though I was a commuter,” he said.
Now, only two months after graduation, Jones is settling into his new position as an admissions counselor at his alma mater.
Jones grew up in New Bern, and then he joined the military.
After 17 years, he left the military and became a supervisor for a railroad company, where he worked for four years. Over that span of time, he lived in four different states.
Jones decided working for the railroad wasn’t his cup of tea, so he decided to go to college to study sports management.
“Sports have always been a big part of my life,” Jones said, attributing his love of athletics to his father. “I grew up on sports.”
But constantly moving hindered his academic progress.
“I’ve had to stop and start again,” he said.
When Jones finally quit working for the railroad altogether, he decided to go back to school full time.
That’s when he discovered Catawba College.
Jones said the people he came in contact with around the campus were a huge factor in his decision to attend the school.
“I had a really good experience with my admissions counselor,” he said.
So Jones enrolled at the college in the fall of 2012 and made a decision to be as actively involved as possible.
When he found out about a webcasting internship in the athletics department, he jumped at the opportunity to join the team.
“It seemed like a perfect fit for me to get involved with webcasting,” he said, adding that he had done some work with webcasting at one of his previous schools.
Around the time of graduation, he found out there was an open position for an admissions counselor at the school.
The job was “a good fit for me to give back to the Catawba way of life,” Jones said.
The role of an admissions counselor is to “recruit students that are a good fit for Catawba,” he said.
Jones is responsible for applicants from the eastern part of the state, Virginia and New Jersey.
Jones said his background makes him a good fit in the admissions office.
Moving gave me a “good background for how I talk to people,” he said.
Catawba College recently released the results of a survey revealing where the school’s 2014 graduates are now. Of 287 graduates, 178 responded to the survey.
Thirty-nine of those students have been accepted into graduate programs, including divinity and business programs at Wake Forest University, veterinarian school at North Carolina State University and chemistry and divinity at Duke University.
Eighty-one of those students had already secured full-time or part-time jobs. Those positions varied widely. Graduates hold positions as teachers, police officers, sales representatives, actors and accountants. One graduate is the interim director of a YMCA, and one is a broadcaster. A number of those graduates decided to stay local, taking jobs in Rowan County and the surrounding area.
Linda Castillo Murillo is another one of those graduates who has already secured a local job. She is a certified medical assistant at Salisbury Pediatric Associates.
Murillo, a Carson High School graduate and a current Mooresville resident, received her bachelor’s degree in chemistry with a minor in biology. She is originally from Costa Rica.
Murillo, who plans to either pursue a career as a pediatrician or an obstetrician, said her position is preparing her for a future in the medical field.
“Right now, I am gaining medical experience in a pediatric clinic,” she said, adding that she’s also studying for her Medical College Admission Test.
Murillo said she’s learned a lot about patient interaction and professionalism. She takes patient vital signs, asks health history questions, draws blood and processes labs.
“The more I learn now, the easier it will be later,” Murillo said.