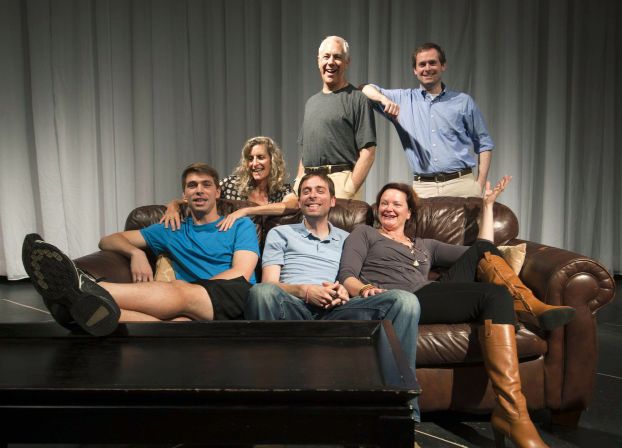 St. Thomas Players’ second production this summer is quite different from its first, “Driving Miss Daisy,” yet, as director Jennifer Hubbard points out, “Next Fall” explores the same themes.
“Both plays allow us glimpses into the lives of people who have been marginalized by the mainstream.
“This is not a play that people know,” Hubbard says, “but I feel strongly that it’s a play people should know, not because it’s well-written (which it is), not because it’s funny (which it is), but because of the important story it tells.”
“Next Fall,” by Geoffrey Nauffts, was nominated for a Tony Award in 2010. When Hubbard saw it on Broadway, she knew she’d be “taking the script back to St. Thomas Players. It was right up our alley.” Her husband agreed it was the perfect material for St. Thomas, “thought-provoking, intelligent and compassionate” in its portrayal of a gay couple, Adam and Luke, confronting a major challenge in their relationship — their differing spiritual beliefs. Adam, a New York intellectual, is an atheist, while Luke is a Southern Baptist from Florida.
Hubbard describes it as a “slice of life play — my favorite kind — that transports us to a waiting room in a New York City hospital where Luke’s life hangs in the balance and where five people who care deeply about him spend 12 hours together” waiting for an outcome. Hubbard says the play weaves together past and present, flashing back over five years, telling the story of Adam and Luke.
“My goal has been to tell Adam and Luke’s story as honestly and realistically as possible.” She says the two actors playing the roles, Tony Moore as Adam and Patrick Hogan as Luke, “are very winning.” Barnet Sherman, who plays Luke’s father, Butch, says, “This play represents the best of contemporary American theater. It brings to the stage in a genuine and authentic way those social and personal issues that are going on in private all around us. It compels us to see them, address them, be challenged by them and even disagree about them. But it compels us.”
The three actors are newcomers to St. Thomas Players, the theater company of the Center for Faith & the Arts. Others in the cast include Carrie Poole, who plays Arlene, Luke’s mother; Alice Rich plays Holly, Adam’s best friend; Tim Campbell plays Brandon, a friend of Luke’s who doesn’t approve of his relationship with Adam.
Hubbard said some people were not sure Salisbury was ready for the play, but she feels it tells a story in a non-stereotypical way. Because Lee Street is St. Thomas Players’ new home, they had to pick plays about a year in advance. Hubbard stepped in as director when Kurt Corriher bowed out to spend more time with his family. She got in touch with actors she knew and had a good choice of talent during auditions.
Hubbard sings the praises of Catawba College interns who have been working at Lee Street this summer. “They are so well-trained.” Faculty member Chris Zenk will design the lights.
Hubbard expects some people won’t like the play, but “I think they’ll be surprised when they sit and think about it that this is a play about love and having compassion for your fellow humans. That fits right in with St. Thomas Players.”
The play is sponsored by Salisbury Pride and the Cataldos. Seating is general admission. There will be talk-back sessions following both Friday performances.
Want to Go?
What: Geoffrey Nauffts’ “Next Fall”
When: July 17-19 and 24-26 at 7:30 p.m.
Matinee performance July 20 at 2:30 p.m.
Where: The Lee Street Theater & Performing Arts Center at the Tom & Martha Smith Event Center, 329 N. Lee St.
How much: $15 general admission. In advance at www.leestreet.org/tickets or 704-310-5507.