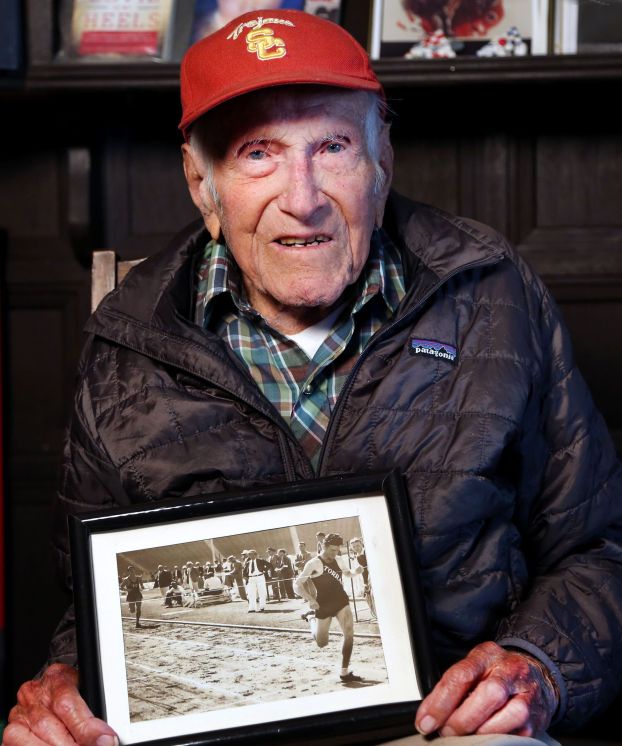 More than a hero

Just two pages into the book “Unbroken,” its protagonist is in the water, hiding beneath the deteriorating life raft in which he has been drifting across the Pacific Ocean for almost a month. Overhead, Japanese bombers are circling back to strafe him a second time. And sharks are approaching from below.
Death is coming for him from two directions, and your impulse is to verify that this is not a novel, not some outlandish fiction from the Indiana Jones School of Narrow Escapes.
But it isn’t. The story is true, the man in the water, real. His name is Louis Zamperini and he died last week of pneumonia.
No one who has read the book (a movie of the same name is due on Christmas Day) will be surprised to learn that it took that fearsome disease 40 days to claim this 97-year-old man. If Zamperini was nothing else, he was a fighter. Whatever life threw at him, he threw back.

Child of poor Italian immigrants in suburban Los Angeles, he overcame a predilection for petty theft, vandalism and brawling to become a celebrated runner, first in high school, then in college and finally in the 1936 Berlin Olympics. Bombardier for the Army Air Corps, he overcame a plane crash, surviving 47 days on a raft in the trackless vastness of the Pacific Ocean, subsisting on rainwater, fish and seabirds. Prisoner of the Japanese, he overcame daily beatings and torture from a sadistic guard nicknamed “the Bird,” and lived to return home after the war ended. A cash-strapped alcoholic and wife beater, tormented by nightmares of what the Bird did to him, he overcame his own degradation when he came forward at a tent revival and accepted Christ at the invitation of a young evangelist named Billy Graham. A veteran who would have been fully justified in anger and bitterness over what the Japanese did to him, he overcame those things to carry the torch in the 1998 Olympics in Nagano and write a letter of forgiveness to the man who had daily tortured him.
For all these things and more, Zamperini is being hailed as a hero. But frankly, the word feels too small, having been mashed into near impotence by its own ubiquity. These days, we overcompensate for our mistreatment of servicemen and women in controversial wars of the past by declaring every supply sergeant in North Carolina or desk clerk in Texas who wears a military uniform to be a “hero.” It is a relatively harmless thing, and certainly well-meant. But it leaves us no adequate word for a man like Zamperini.

The lessons of his life are manifold and manifest, a master class in moral and physical fortitude, resilience and resistance, the criticality of human dignity, the importance of fight, faith — and forgiveness. Those lessons seem especially crucial for the America Zamperini leaves behind, a nation riven by isms and shrunken in its vision.
Indeed, his whole generation — the ones who overcame the Depression and saved the world — is leaving that nation behind and perhaps it is only now, as they do, that we can truly appreciate who and what they were and did. They were not perfect, Lord knows, but they were more right about more things than their children and grandchildren ever gave them credit for. They didn’t do a lot of whining. Their navels went ungazed. They saw what needed to be done and did it with no expectation of reward. They understood they were part of something larger than themselves and that, sometimes, the price of belonging is sacrifice.
We could use some of what they had — some of what Zamperini, in particular, had. He overcame sharks, torture, hunger, gunfire, the Pacific Ocean and his own demons to die peacefully at an advanced age with his family around him. No, he is not a hero.
He is whatever comes after that.

Caution lights dangerous at busiest intersections My husband and I have witnessed two accidents in the last two weeks that... read more