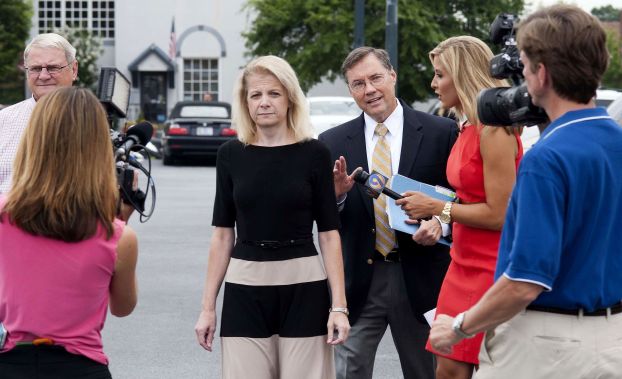 One by one, four of the eight people charged in a large-scale prescription fraud scheme, most of whom are educators, turned themselves into authorities.

The Walkers are each charged with trafficking opiates by possession.

Abby Walker was led to the Rowan County Magistrate’s Office Wednesday morning by her attorney James Davis and led out by China Grove Police investigators and an agent from the SBI. Her husband, Orrin, is expected to turn himself in to authorities today.

Teresa Beaver Seagroves, 53, an administrative assistant at McKnight Child Development in Kannapolis was also charged along with Summer Knight Thomason, 31, an educator at Southside Christian Academy in Salisbury; and Crystal Elizabeth Maness, 31, of Salisbury.

Abby Walker did not comment as she waited outside the door of the magistrate’s office. She was the first to turn herself in and wiped at her eyes upon heading into the Rowan County Detention Center with investigators.

Teresa Seagroves was led to the magistrate’s office by Attorney Darrin Jordan. She became emotional as she waited with him. Jordan gave his client a strong pat on the back and the two walked through a gate with investigators. She did not speak to reporters gathered outside.

“I’m here to turn myself in,” said Tammy Eudy, who was flanked by her Attorney Bays Shoaf.

She did not respond to queries by reporters.

Meredith Raynes was the last to arrive at the magistrate’s office. She walked up without an attorney, but with someone who appeared to be family member. Raynes was reportedly the only one officials had to search for while the others volunteered to appear Wednesday.

Abby Walker was a second-grade teacher during the times the crimes occurred, but was suspended when school district officials learned of the investigation, and she subsequently resigned.

Authorities say Walker and his wife sought out co-workers and friends who agreed to assist the couple in their scheme.

Dr. Walker wrote prescriptions for the pain killer hydrocodone in the names of the suspects, who were not his patients.

Abby Walker would coordinate with the other suspects, who allowed their names to be used for the pick-up, payment and delivery of the pills to the Walkers, according to authorities.

Investigators said the group turned in 200 fraudulent prescriptions involving 25,000 doses of hydrocodone. They were filled at several pharmacies in China Grove, one in Salisbury and one in Kannapolis.

Dr. Walker, 48, who worked at Main Street Family Practice in China Grove, surrendered his license to the N.C. Medical Board.

The health care providers and staff of Main Street Family Practice say they are “shocked and saddened regarding the current events and charges involving Orrin and Abby Walker,” according to a statement.

Dr. Walker is no longer employed here and no other employees were involved in the criminal activities and have not been targeted in the investigation, the statement said.

“The entire staff remains committed to the total health care of all our patients,” officials said.

Tammy Eudy has been suspended without pay. The status of the others is still unknown.

Your daily look at late-breaking news, upcoming events and the stories that will be talked about today: 1. OBAMA HEADS... read more