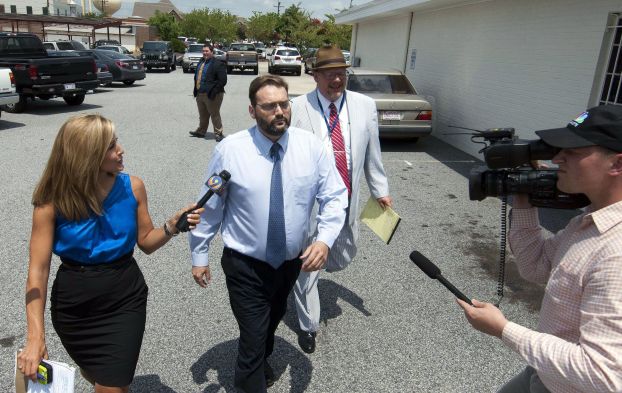 China Grove Dr. Orrin Walker makes no statement as he turns himself in on prescription fraud charges

Walker, 48, who worked at Main Street Family Practice in China Grove, turned himself in to authorities days after a grand jury indicted the doctor, his wife Abby, a former Bostian Elementary School teacher and six others that included several school educators on prescription fraud.

China Grove investigators along with the State Bureau of Investigation and Landis Police say the group was involved in the prescription fraud scheme that spanned nearly two years. The indictment said six of the women allowed the doctor to issue multiple prescriptions to them that they then filled at various pharmacies.

Officials said there were 200 prescriptions filled that equated to 25,000 dosages of the pain reliever hydrocodone.

Dr. Walker, who surrendered his medical license to the N.C. Medical Board, was the final person to report to authorities of the eight people charged. Three of the other women worked at Bostian Elementary along with Abby Walker, who was initially suspended and then resigned.

Dr. Walker is accused of writing prescriptions for the pain killer hydrocodone in the names of the suspects, who were not his patients.

Abby Walker would coordinate with the other suspects, who allowed their names to be used for the pick-up, payment and delivery of the pills to the Walkers, according to authorities.

Alisha Christian and Summer Thomason both were accompanied by attorneys when they turned themselves in to authorities Thursday morning. Salisbury attorney John Basinger represents Christian and attorney Greg Jones was hired by Thomason.

Authorities have said the Rowan-Salisbury School System and Main Street Family Practice were fully cooperative with law enforcement during the investigation.

Since I don’t particularly like the Adventure Cycling route, today started off with a lot of uncertainty. I stopped first... read more