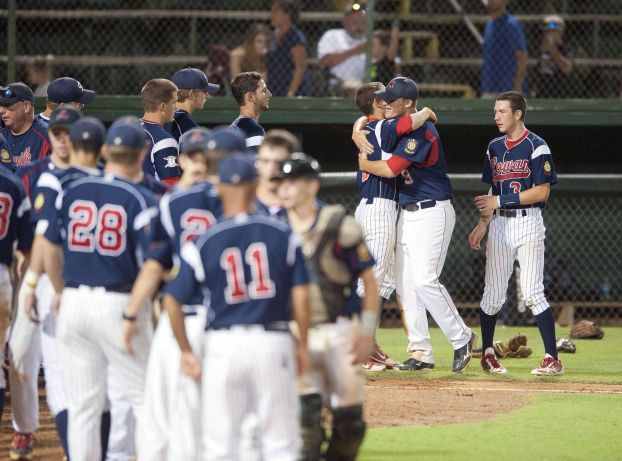 SALISBURY — As a starting pitcher, Harrison Baucom provided some much-needed relief Tuesday night at Newman Park.
The Rowan County righthander made his first start of the season a memorable one, limiting Mocksville to three hits in five innings to spark a series-clinching 11-1 victory.
“I was kind of surprised they called on me,” Baucom said after RC (23-6) completed a three-game, second-round sweep in eight innings. “I’m normally a guy they bring in for the last inning as a closer. This was my first start ever, other than Little League.”
Baucom was pressed into the rotation because starters Brandon White and Hunter Shepherd remain shelved with lingering arm trouble. He made the most of it — inducing eight groundouts and allowing just five Mocksville baserunners. He walked two, struck out one and was reached for only a first-inning run.
“He kept the ball down and changed speeds. That was crucial,” said Rowan coach Jim Gantt. “We needed to get through a few innings with him, enough to get to our regular bullpen guys. Our concern was we didn’t want him go out and get knocked out after an inning or so.”
Baucom kept his infielders busy and his pitch count down. After Mocksville opened the scoring on a first-inning single by Sawyer Davis, the guests had only one other baserunner reach third base.
“You gotta get guys on base,” losing coach Charles Kurfees said after Mocksville (13-16) melted in the playoff heat. “They had excellent pitching the whole series. We didn’t hit the ball in the clutch in Games 1 and 2, and tonight we just got taken out early.”
Credit goes to Baucom and a Rowan lineup that resembled a hit factory. It produced Luke Setzer’s first-inning RBI double into the left-field corner and Heath Mitchem’s pinch-hit double to right in the eighth. Coupled with 16 singles, Rowan’s 18-hit attack simply smothered Mocksville’s pitching staff.
“It’s a great hitting team,” second-baseman Michael Caldwell said after going 3-for-5 and delivering the game-ending hit with two out in the eighth. “We all go up there with good approaches and try to hit the ball hard. I know I’ve struggled the past two games and had to go in with a different mindset tonight. I tried to square up some balls and hit everything back up the middle.”
Rowan built a 4-1 lead against Mocksville starter Nick Collins before busting the game open in the bottom of the fifth. RC strung together five consecutive singles and scored four runs on seven hits to mount an 8-1 edge. Shepherd, Jeremy Simpson and Chance Bowden had RBI hits and Caldwell lofted a sac fly.
“We had a bunch of hits in a row,” said Gantt. “But we kept hitting them right at their outfielders and had to play station-to-station. We just went up there trying to do what needed to be done instead of trying to hit it over the fence.”
Gantt turned the rest of the game over to his sturdy bullpen. Righthanders Corey Fries and Harrison Bell combined to pitch three innings of scoreless relief — and coaxed six more groundouts.
But when they rolled the closing credits, it was Baucom’s name that stood alone. He was more craftsman than laborer and spent more time befuddling, rather than fooling, Mocksville’s hitters.
“It was a tough spot,” he said afterward. “But I just had to keep my mind clear out there. I stayed mentally prepared. You’ve still got to do your job and throw strikes.”
•

NOTES: RC’s Dustin Ritchie also went 3-for-5 and scored twice. … For the first time this postseason, Rowan can kick back and put its feet up. Round 3 likely begins Saturday against the winner of the Eastern Randolph-Winston-Salem series.