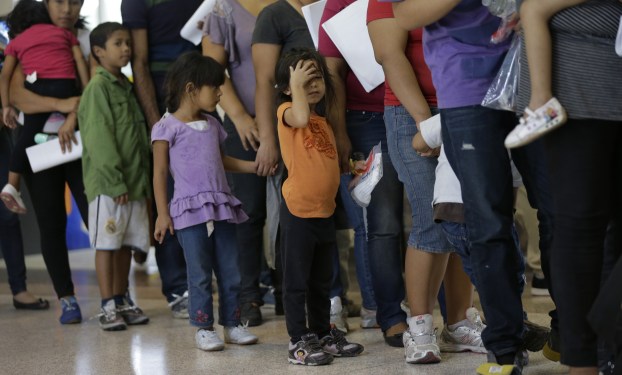 WASHINGTON (AP) — President Barack Obama appealed to Congress on Tuesday for $3.7 billion in emergency spending to deal with the immigration crisis on the nation’s southern border, where unaccompanied children have been showing up by the thousands in a human drama that’s causing a political storm in Washington and beyond.
Obama himself was flying to Texas on Wednesday, a trip designed mostly for political fundraising for Democrats but now including a meeting on immigration with Gov. Rick Perry and religious and local leaders in Dallas. He rejected pressure from the Republican governor to visit the border for a firsthand look.
In Washington, Democrats and some Republicans on Capitol Hill seemed open to approving the emergency money, which would go toward hiring more immigration judges and asylum officers, building more detention facilities, boosting deterrence and enforcement and increasing surveillance along the border with Mexico. Senate Majority Leader Harry Reid, D-Nev., said the Senate would act on it this month.
Obama said in a formal letter of request that the money was needed to “address this urgent humanitarian situation.”
But Senate Democrats voiced skepticism about other changes the White House has said it wants that would send the minors back to Central America more quickly, partly by limiting their existing rights to court hearings. Those proposals, which are not part of Tuesday’s request, have infuriated immigrant advocates who say they would result in harsher treatment of kids and eliminate their legal protections.
“Everybody’s very concerned. I’m one of them,” said Sen. Dick Durbin, D-Ill. “I just want to make sure that at the end of the day we’re being fair, humane and doing this in an orderly way.”
At the same time Republicans criticized Obama for stepping back from asking for those legal changes, which the White House initially had said would come in concert with the emergency spending request. The White House now says those proposals will come later.
“He just decided not to do that because of the pushback he got from some in his own political base,” said Sen. John Cornyn, R-Texas. “We need to solve the problem, but you don’t need to just ignore the cause of the current crisis. And that requires more than just appropriating $3.7 billion for additional judges and the like.”
The back-and-forth came as lawmakers reconvened on Capitol Hill after a weeklong July 4 recess and suggested political struggles ahead over the unfolding situation at the border. More than 50,000 young people have showed up unaccompanied since last fall, many fleeing oppressive violence in El Salvador, Guatemala and Honduras, but also drawn by rumors that once in the U.S. they would be allowed to stay.
Lawmakers are now beginning to confront the full dimensions of the crisis, and their responsibility to act, with midterm elections around the corner. It all comes with comprehensive immigration legislation dead in Congress for the year and Obama preparing to take steps by his executive authority to change the nation’s faulty immigration system where he can — plans that could be complicated by the border crisis.
Cornyn and other Republicans kept up their criticism of Obama’s decision not to include a border visit in his Texas trip, but the White House held firm, instead adding the meeting on immigration to Obama’s schedule in Dallas. Perry announced plans to attend.
As for the spending request, some Republicans said they would have to review the details. “We’re going to take a look at it. This is clearly a huge crisis,” said Senate Minority Leader Mitch McConnell, R-Ky.
House Appropriations Committee Chairman Hal Rogers, a Republican, called the situation on the border “extremely dire” and said that additional funding clearly would be needed to care for the children, enforce the law and secure the border. “Our committee will focus on providing what is necessary,” said Rogers.
Immigrant advocacy groups, however, worried the package placed too much emphasis on enforcement and on deporting minors.
“This package was sent up with this very strong message that we keep hearing from the White House, which is detain, deter and deport,” said Wendy Young, president of Kids in Need of Defense, an advocacy group for immigrant children. “The issue is much more complicated than that.”
Meanwhile officials with the U.N. High Commissioner for Refugees said they want many of the Central Americans to be treated as refugees displaced by armed conflict, a designation that could increase pressure on the U.S. to accept tens of thousands currently ineligible for asylum.
Asked about that, White House press secretary Josh Earnest said individuals coming from Central America are already entitled to due process.
But White House officials are seeking to change a 2008 law signed by President George W. Bush that guarantees immigration hearings to minors who arrive in this country from noncontiguous countries — anywhere other than Mexico or Canada. The law was pushed to combat sex trafficking and give young people new protections.
In the current crisis, it’s resulted in children from Central American countries being released to family members or into foster care while they face long waits for court hearings they may never attend.
Kids from Mexico, by contrast, are screened by Border Patrol agents who can decide to send them back unless determining they have a fear of return that merits additional screening. The administration wants to be able to treat Central American children in much that same way.