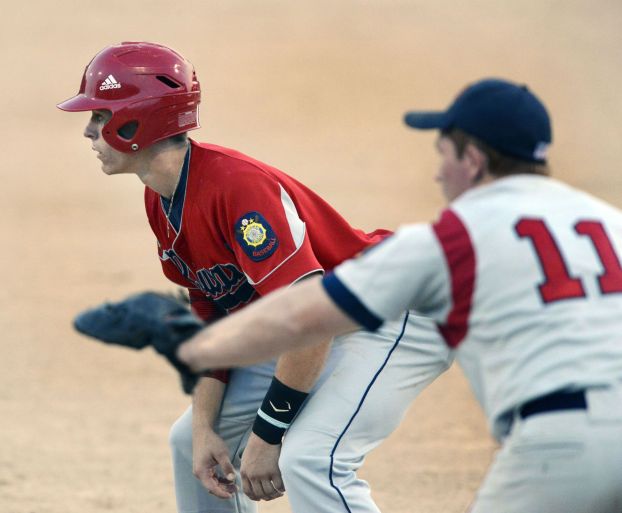 MOCKSVILLE — Don’t tell Chance Bowden that Monday’s grand slam at Mocksville’s Rich Park was only his fourth blast of the summer.
“Well, that’s actually five — counting the one in the all-star game,” Bowden said with a grin.
Bowden’s monstrous homer in the Area III All-Star Game at Newman Park was memorable, and he just about replicated it with one mighty, game-changing swing in the seventh inning at Mocksville.
Bowden batted with Mocksville leading 2-1. When he finished rounding the bases, with Jeremy Simpson, Michael Caldwell and Riley Myers in front of him, Rowan led 5-2 and was headed for a 10-5 victory.
Had Bowden hit into an inning-ending double play, Mocksville may well have won the game. Instead, Rowan owns a 2-0 lead in the best-of-five series and goes for the clincher tonight at Newman Park.
It’s probably a good time to mention that Rowan has won 16 straight playoff series against Mocksville, although no one can complain about the way a Mocksville team that is short on arms is competing.
“This bunch is playing hard,” Mocksville coach Charles Kurfees said. “But Rowan’s got a great lineup and they’ve got a great team.”
Despite the final score, much of the night was a pitching duel between Mocksville’s Colby Cranfill and Rowan’s Chase Jarrett.
Rowan hitters lofted one flyball after another against Cranfill — Rowan didn’t make an out on a groundball until the sixth — and Mocksville got RBIs from Sawyer Davis and Charlie Muchukot to lead 2-0 after five innings.
“We hit some balls hard, but their outfielders were getting great jumps,” Bowden said. “Very good outfield.”
The only reason Mocksville’s lead was just 2-0 was a diving stop by Rowan third baseman Myers on a hard-hit ball by Kyle Mehl that saved Jarrett two runs in the fourth.
“Riley’s play was big,” Rowan coach Jim Gantt said. “ It’s amazing how a good defensive play lifts your spirits and gets the bats going.”
Rowan (22-6) finally got on the scoreboard against Cranfill in the sixth when Luke Setzer singled home Myers.
Jarrett’s strongest inning was the sixth. Mocksville went down 1-2-3 for the first time, and momentum had clearly swung to the visitors.
Simpson’s bouncing single, Caldwell’s push-bunt single and a walk to Myers on a 3-2 pitch set the table for Bowden.
Kurfees went out to talk to Cranfill as Bowden strode to the plate, but he had more faith in Cranfill than anyone he could bring in for him.
“I knew I was going to see something to hit with the bases loaded,” Bowden said. “I wanted to drive the ball and stay out of the double play and luckily I got a pitch to hit. It was a low, inside fastball.”
He got all of it and made a winner of Jarrett (4-0).
“It was hot and I was tiring, but I battled as hard as I could as long as I could,” Jarrett said. “We’ve got a good-hitting team. I knew sooner or later we’d get some runs.”
Rowan led 10-2 at one point, as a two-run double by Dustin Ritchie, one of his three two-baggers, and a run-scoring single by Michael Pinkston padded the lead.
Alec Hamilton relieved Jarrett with two on in the seventh and got two key outs. Harrison Bell pitched the last two innings. Jose Carillo smacked a two-run triple for Mocksville in the ninth.