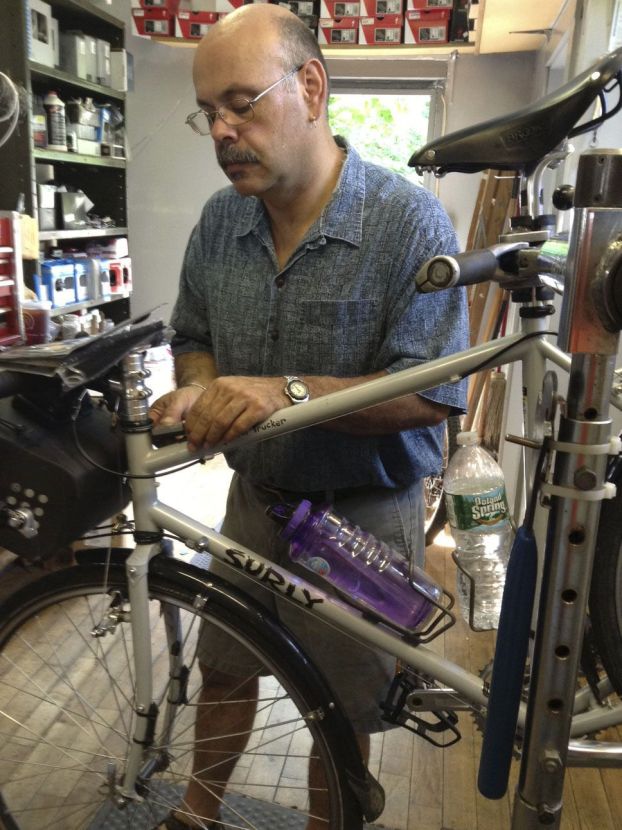 After a good sleep near Framingham, MA, I was off and rolling through the city streets of Natick just a little after 7 a.m. I had no firm plan as to what roads to take. I needed a good map and stopped soon to get one. I wanted to head south and a little bit west.

I headed south and west on Hwy. 27, then a little more west on Hwy. 16. After ten miles, my bike cyclometer (odometer) quit working. I stopped first at a closed bike shop, but then moved on to Milford Bicycle in Milford, MA. I got great service but had to get a new cyclometer. Thanks for a great job. The next significant town was Uxbridge, with so many old homes and churches that I wanted to keep taking photos.

My plan now was to go through just a little northwest clip of Rhode Island and then head into Connecticut. Carrie Smith and Norman Labelle in Douglas, MA told me just how to do it. It was a fun day of meeting people who cared about my trip and there was lots more of that to come.

Just as I was about to leave Douglas, I felt the need for a little ice cream. The day had been dragging and why not have some ice cream? When I pulled in, I saw two loaded bikes leaning against the building. Katie Levin and Bret Ericson from Brooklyn, NY were pedaling toward Portland, ME. We swapped info and had a wonderful conversation about bicycle touring. They told me about cycling out of New York City and invited me to entertain the thought of doing the same. I have been thinking about that possibility all afternoon.

I got some local info from Bill Raymond of Harrisville, RI and soon had a plan for the rest of the afternoon. Bill just returned to Rhode Island after living in Greensboro. He is a cyclist and knew the scoop on distances that mattered. Off I went to Harrisville and entry into Rhode Island.

I got some conflicting info in Harrisville, but decided to head toward Putnam, Connecticut which my sources said was anywhere from six to 30 miles away on Route 44. Reportedly, Putnam had a reasonably priced motel.

Upon arriving in Putnam, I got the real scoop from John and Alaina Yatev. They sent me directly to Dayville, Conn. and the Budget Inn. I met Johnny and Lila Yatev, too and we all did pictures to preserve the moment.

There is more, but I need to submit the story before I ramble on. I am comfortable tonight at the Budget Inn after a nice talk with the owner about some of the logistics of my ride. I am going to call today’s total distance at 70 miles, since I am guessing somewhat because of the cyclometer problem. I hope to make good headway in Connecticut tomorrow.

Never once all day did I get the Adventure Cycling maps out. This was a freelance, seat-of-the-pants day using regular state maps and knowledgeable people. It turned out to be a lot of fun.

Your daily look at late-breaking news, upcoming events and the stories that will be talked about today: 1. WHERE TO... read more