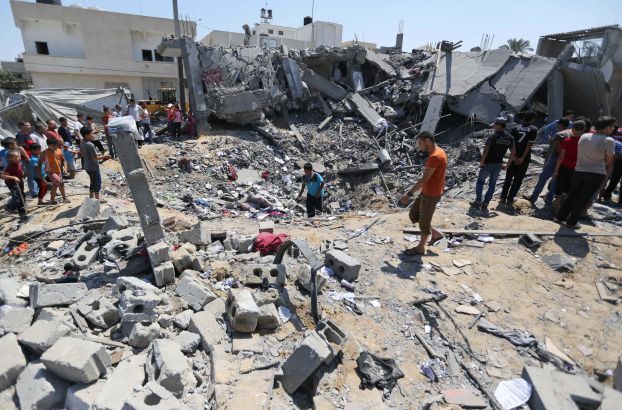 Your daily look at late-breaking news, upcoming events and the stories that will be talked about today:
1. ISRAEL LAUNCHES MILITARY OFFENSIVE AGAINST GAZA
At least 50 sites are struck by air and sea as troops mobilize for a possible ground invasion in order to quell rocket attacks.
2. WHY MORALE IN THE SILOS IS IN A SLUMP
The nuclear weapons corps behind the “Big Sticks,” as some people call the 60-foot-tall Minuteman 3 missiles, have been getting the short end of the stick, and so has their mission: the AP finds equipment necessary for their support is aging into obsolescence.
3. PRESIDENT TO REQUEST $2B IN AID FOR IMMIGRATION CRISIS
Obama will seek just the money and not–at least, for now — the legal changes necessary to more quickly send home unaccompanied children arriving in droves at the border.
4. SCIENTISTS HELP THE BLIND WITH A SEEING-EYE RING
The visually impaired can wear the audio reading device on their index finger and scan written material with it which is then read to them in real time.
5. HOW PRAGMATISM SHAPES SHIFTING ASIAN DIPLOMACY
Old feuds between the continent’s powers run deep — but their self-interest often runs deeper, leading to an ever-changing array of alliances.
6. DEFENSE WRAPS CASE IN PISTORIUS TRIAL
The court will hear final arguments in the case against the former Olympian next month.
7. WHERE UKRAINE FIGHTING COULD ERUPT NEXT
Separatist militants driven from eastern towns by the Ukrainian army are regrouping in Donetsk, a major industrial city of 1 million where pro-Russia rebels have declared independence.
8. FROM HOPE AND CHANGE TO HOPING FOR CHANGE
President Obama muses about the dangers of cynicism in major public appearances in a markedly different tone from his days as a candidate, when he rallied millions with ambitious aspirations.
9. RETAIL POT STORES OPENING IN WASHINGTON
The state’s first two dozen recreational marijuana outlets will be able to start selling cannabis Tuesday morning.
10. JUDGE OKS DEAL TO PAY FORMER NFL PLAYERS FOR CONCUSSION CLAIMS
The settlement is designed to give $1 million or more to retirees who develop Lou Gehrig’s disease or other profound neurological problems.

Your daily look at late-breaking news, upcoming events and the stories that will be talked about today: 1. WHERE TO... read more