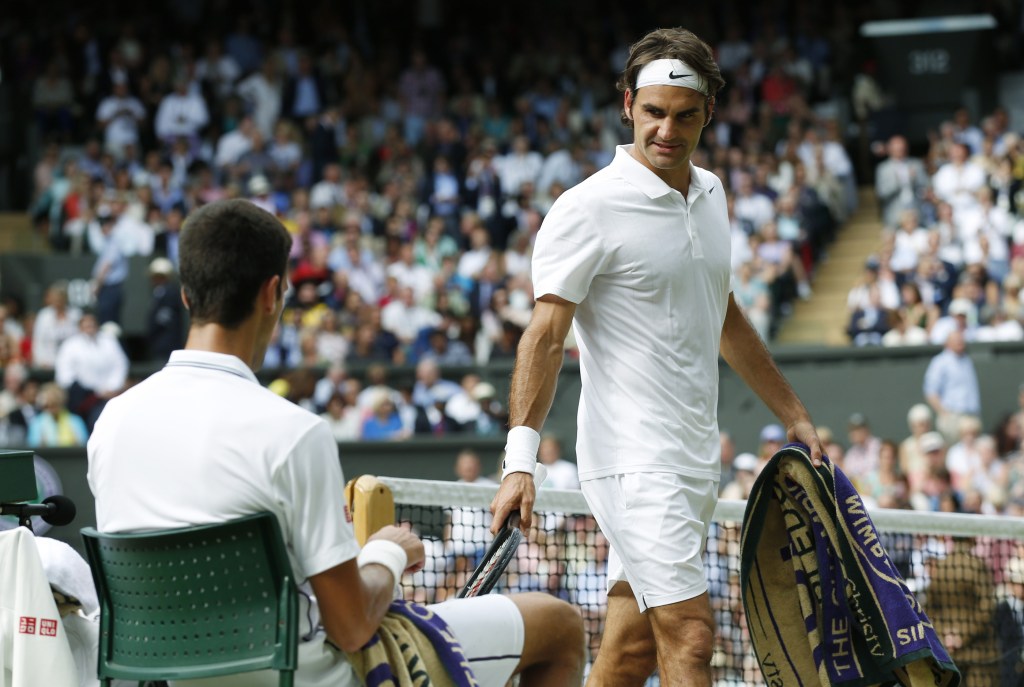 LONDON (AP) — Novak Djokovic’s large lead in the rollicking Wimbledon final was slipping away, due in no small part to Roger Federer’s regal presence and resurgent play.

No man has won tennis’ oldest major tournament more often than Federer, and he was not about to let it go easily. Djokovic went from being a point from victory in the fourth set to suddenly caught in the crucible of a fifth, and knew all too well that he had come up short in recent Grand Slam title matches.

Steeling himself when he so desperately needed to, Serbia’s Djokovic held on for a 6-7 (7), 6-4, 7-6 (4), 5-7, 6-4 victory after nearly four hours of momentum shifts Sunday to win Wimbledon for the second time — and deny Switzerland’s Federer what would have been a record eighth championship at the All England Club.

“I could have easily lost my concentration in the fifth and just handed him the win. But I didn’t, and that’s why this win has a special importance to me, mentally,” Djokovic said. “I managed to not just win against my opponent, but win against myself, as well, and find that inner strength.”

Cradling his trophy during the post-match ceremony, Djokovic addressed Federer directly, saying: “I respect your career and everything you have done. And thank you for letting me win today.”

Even Federer had to smile at that line.

Truth is, Djokovic deserved plenty of credit for figuring out a way to raise his Grand Slam total to seven titles and allows him to overtake Rafael Nadal at No. 1 in the rankings.

“Novak deserved it at the end, clearly,” said Federer, who hadn’t been to a Grand Slam final since winning his 17th major at Wimbledon in 2012, “but it was extremely close.”

Federer, who turns 33 next month, won 88 of 89 service games through the semifinals and produced 29 aces in the final, but Djokovic broke him four times.

Federer went to the net aggressively, only to see Djokovic zoom more than a dozen passing shots past him. And with most of the Centre Court crowd of about 15,000 raucously cheering for Federer, the 27-year-old Djokovic kept believing in himself.

That part might have been the most difficult, given that Djokovic lost his past three major finals, and five of his past six, including against Andy Murray at Wimbledon last year, and against Nadal at the French Open last month.

“Started doubting, of course, a little bit,” Djokovic said. “I needed this win a lot.”

Boris Becker, the three-time Wimbledon champion who began coaching Djokovic this season, called the new champion “the biggest competitor” and praised “his sense of not giving up, giving it always another try.”

Djokovic built a 5-2 lead in the fourth set and served for the championship at 5-3. But Federer broke there for the first time all afternoon, smacking a forehand winner as Djokovic slipped and fell on a patch of brown dirt.

Djokovic took a nastier tumble in the second set, hurting his left leg and prompting the first of two medical timeouts; he got his right calf massaged by a trainer in the fifth.

With Federer serving at 5-4 in the fourth, he double-faulted to 30-all, then netted a backhand for 30-40 — handing Djokovic a match point.

Federer hit a 118 mph (190 kph) serve that was called out, but he challenged the ruling, and the replay showed the ball touched a line for an ace. That was part of Federer’s five-game run to force a fifth set. It would be another 42 minutes until Djokovic again stood so close to triumph.

“Can’t believe I made it to five,” Federer said. “Wasn’t looking good there for a while.”

In truth, after so much drama, the ending was anticlimactic. Trailing 5-4 but serving, Federer missed four groundstrokes, pushing a backhand into the net on Djokovic’s second match point.

Victory his, Djokovic knelt on the most hallowed tennis court in the world, plucked a blade of grass and shoved it in his mouth, just as he did after his 2011 Wimbledon title. He dedicated this victory to his pregnant fiancee “and our future baby,” and to Jelena Gencic, his first tennis coach, who died last year.

“This is the best tournament in the world, the most valuable one,” Djokovic said. “The first tennis match that I ever (saw) in my life, when I was 5 years old, was Wimbledon, and that image stuck (in) my mind.”