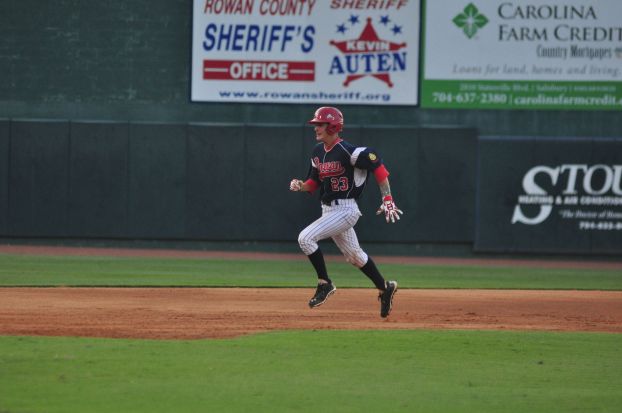 SALISBURY — The story in Rowan’s wild 7-5 win against Mocksville on Sunday was reliever Ryan Jones.
“Helluva job, Jones!” barked Rowan coach Jim Gantt as Jones headed for the locker room, his right shoulder boarded and iced, and no words of praise for Jones would’ve been too extravagant.
Mocksville had everything going its way early in the opening game of a best-of-five series. Rowan ace Connor Johnson was in the showers by the fourth, walks and errors were piling up for the favored home team, and Jones was neck-deep in his own jam after entering the game in the fifth.
Rowan was down 5-2 at that point and Mocksville, threatening to break it open, had the bases loaded with one out and was at the stout part of its lineup with No. 2 hitter Nick Collins at the plate.
But then Jones made a pitch that turned the game around. Groundball. 6-4-3. Inning over.
“Nick is actually one of my best friends, and I knew how I wanted to pitch to him,” Jones said. “I kept it low, got a groundball, and our infield handled it great.”
Crowd roaring, Rowan came in to hit and scored twice on two walks, Luke Setzer’s RBI single and a wild pitch. That made it 5-4.
“The double play was huge,” Gantt said. “If you can’t come in and build momentum off something like that, then you’re sleepwalking or you’re dead.”
Jones fixed a mechanical issue before he went back out for the sixth and dropped his arm slot.
“I was coming too much over the top in the fifth, but then I got back to three-quarters,” Jones said. “And once I found it, it was all good.”
Mocksville (13-14) got five innings out of Charlie Muchukot, a center fielder who just took up pitching when Mocksville ran into injuries. Jose Carillo came behind him and baffled Rowan for two innings.
“We got all we could ask from our pitching,” Mocksville coach Charles Kurfees said. “We just needed our big guys to come through in the clutch more than they did.”
Jones silenced Mocksville in the sixth, seventh and eighth, and in the bottom of the eighth, after Kurfees had turned to Elijah Jones on the bump, Rowan (21-6) rallied.
“It was like guys had tried to be Tarzan for seven innings, but in the eighth we had better at-bats,” Gant said. “Guys did what they’re capable of.”
Dustin Ritchie started the eighth with a line single.
“I’d hit some balls hard up the middle for outs (Collins ran down a long drive in the fifth), but they threw me another fastball and I finally got one to fall,” Ritchie said.
Then Michael Pinkston put a throwing error in the rearview mirror by coming through with a huge, opposite-field double. Hunter Shepherd grounded out to short to tie it at 5-all. Jeremy Simpson’s grounder bad-hopped into right field, and Rowan led 6-5. After Riley Myers blistered a double off the left-field wall, Rowan’s lead was 7-5.
It still got interesting in the Mocksville ninth after an error and two hits filled the bases with two out.
Collins was up. Jones wanted to compete against his buddy, but Gantt turned to Alec Hamilton to save it.
Collins swung hard, but the pitch sank and he rapped a slow, two-bouncer toward second. Rowan’s Michael Caldwell charged and got Collins at first by less than a half-step to end Game 1.
“I got excited when he hit that ball,” Hamilton said. “But then I saw it bounce twice and I knew it was going to be close. Fortunately, that play is Michael’s specialty, and he made it one more time.”