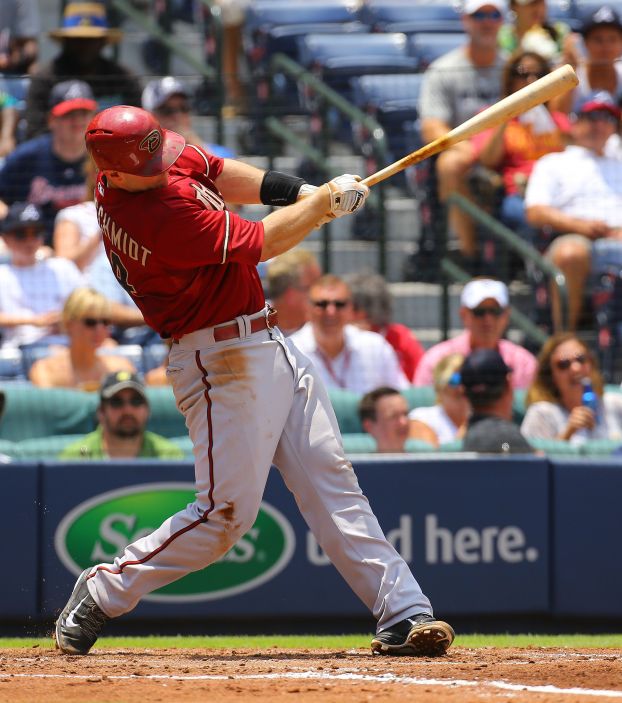 ATLANTA — Alex Wood’s plan was to make sure he didn’t let Paul Goldschmidt beat the Braves.
Wood couldn’t believe Goldschmidt still found a way to come through with the biggest hit of the game.
Atlanta’s nine-game winning streak ended Sunday as Goldschmidt hit a two-run homer that sent the Arizona Diamondbacks to a 3-1 victory over the Braves.
Wood issued a walk to pitcher Wade Miley to open the third inning before Goldschmidt’s two-out homer gave the Diamondbacks a 2-0 lead. Goldschmidt, who had an infield single in the first, had two of Arizona’s three hits off Wood.
“That’s baseball for you,” Wood said. “You go into the game telling yourself that there’s one guy you don’t want to let beat you and then he ends up beating you.”
Braves manager Fredi Gonzalez said Goldschmidt makes a habit of ruining game plans.
“That guy’s got a lot of people,” Gonzalez said. “He’s pretty legit.”
B.J. Upton was 0 for 4 with three strikeouts to end his career-best 11-game hitting streak for NL East-leading Atlanta. The loss kept the Braves from sweeping their third straight series.
“We had a great run, had a great homestand,” Gonzalez said.
Goldschmidt had to delay his home run trot as he waited to make sure the ball, which hit the foul pole, stayed fair.
“I knew it probably had the distance but it started fair and was going, so that was one of the few times I was watching to see what was going to happen,” Goldschmidt said. “I saw it hit the pole and come down. I was pretty happy.”
Wood (6-7) allowed two runs on only three hits and three walks in seven innings.
Miley (4-6) earned his first win since May 10. He allowed one run on five hits and one walk in 6 2-3 innings, striking out eight. He had been 0-3 in his previous nine starts, including a streak of five straight no-decisions.
“He was really, really good,” Gonzalez said. “He was throwing a slider that had some depth to it. He commanded his fastball both sides of the plate, caught some of our right-handed hitters looking. The ball kept coming back.”
Before the game, the Diamondbacks traded right-hander Brandon McCarthy and cash to the Yankees for left-hander Vidal Nuno.
Pinch-hitter Nick Evans’ run-scoring double off Luis Avilan in the ninth pushed Arizona’s lead to two. Evans drove in Martin Prado, who singled off Anthony Varvaro and stole second base.
Addison Reed gave up a leadoff single to Tommy La Stella in the ninth before striking out Christian Bethancourt. Reed wrapped up his 20th save when Ryan Doumit hit into a double play.
Arizona right-hander Brad Ziegler gave up a leadoff single to Andrelton Simmons in the eighth. With one out, Ziegler walked Justin Upton, and the runners advanced on Jason Heyward’s groundout. Ziegler struck out Chris Johnson to end the inning.
Walks hurt both starting pitchers.
Wood walked Miley to open the third inning. With two outs, Goldschmidt’s 16th homer gave the Diamondbacks a 2-0 lead. Goldschmidt, who had an infield single in the first, had two of Arizona’s three hits off Wood.
Miley walked Justin Upton to open the fourth. He scored from second on Johnson’s single up the middle.
Miley didn’t allow another hit until Bethancourt singled with two outs in the seventh. Evan Marshall got the final out of the inning after walking pinch-hitter Dan Uggla.
NOTES: Braves C Evan Gattis, on the 15-day DL with a bulging thoracic disk, said an epidural early in the week helped “a little bit” but his back remains “just a little tight right now.” He said he began stretching exercises on Saturday. … The Braves open a four-game series at the Mets on Monday night with LHP Mike Minor facing RHP Daisuke Matsuzaka. Arizona RHP Chase Anderson will start when the Diamondbacks open a home series against Miami. … Atlanta’s previous loss was June 26 at Houston.