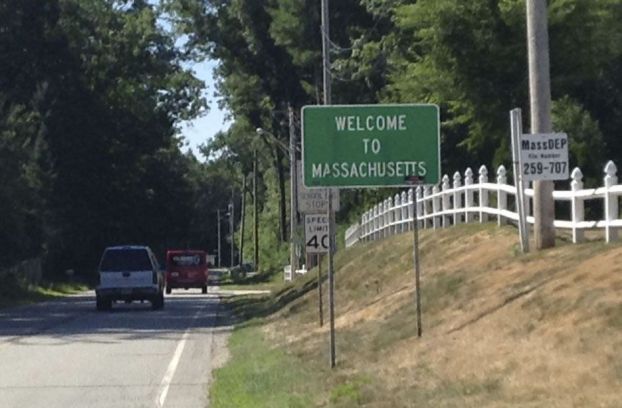 Making my own way, with a little help

After getting to bed close to midnight last night, I didn’t have my usual pep this morning. I had a few of those days last year on the cross-country trip. I kept trying to eat often, hoping that the usual energy would come back, but it didn’t.
Part of the problem was that I had not figured out a good plan for a route today, so I went to bed hoping to have the answer when I woke up. It didn’t come together then either,
I decided to follow the Adventure Cycling map, but couldn’t see anything special about where they wanted me to go. So I turned around, came back and made a plan of my own. Not entirely my own, because I got lots of help throughout the day. These people know better than the Adventure Cycling maps as to what will work. Here is how it went.
I rode to Nashua, N.H. and continued to head south. My favorite route from yesterday, 111 West had now become 111 South. Even better for today. South is my favorite direction.
Lynn and Isaac, at her convenience store, told me about the Nashua Rail Trail just down the road. Rail trails are straight, usually pretty flat, and scenic. This one was all of that, but I quickly found out that it did not have the required “Welcome to Massachusetts” sign. So I had to backtrack to get my picture of that sign, then return to the rail trail.
I met Michael Veit along the trail, where he had a table set up to talk about keeping a pipeline from coming through the area. We had a lot of common interests, and he gave me some insight into the roads heading south.
At the end of the trail in Ayre, I headed toward Harvard, Mass., and hoped to go to Concord of Revolutionary War fame. I found Mary Arata working in her yard and playing with her kids. She had great insight into what I should do to stay safe and continue heading south. We agreed that I should continue on Highway 111, and head south on Highway 27. Going to Concord would be tough because of the excessive traffic and road construction.
Mary said I would enjoy 27, and she was exactly right. There was room to ride a bike, and the scenery was beautiful. I made it to Natick of Boston Marathon fame, and ended up spending the night next door in Framingham, also on the Boston course.
I never could get it really going today. The terrain wasn’t fast, and swirling winds continued for a second day. I made 68 miles, some of it backtracking and a little for extra sightseeing.
I have just eaten everything under the sun and not nailed down. I am planning on a better day tomorrow. As usual, after submitting this, it will be time to get out my maps and start planning. It is going to get hot this week, even in this area. Probably worse as I head south.
Right now, I plan to skirt Boston to the west and then eventually head back toward the coast and maybe eventually U.S. 1. The riding along the coast was fun, and now with the Fourth of July week past, maybe the traffic will be easier.
This trip is once again about the people, and there have been some great ones so far. Planning my own route is likely to keep happening, especially with the help of the locals. There are things and places that I want to see, if they aren’t too far out of the way.
Time to submit the story, and get a shower before planning tomorrow’s ride.