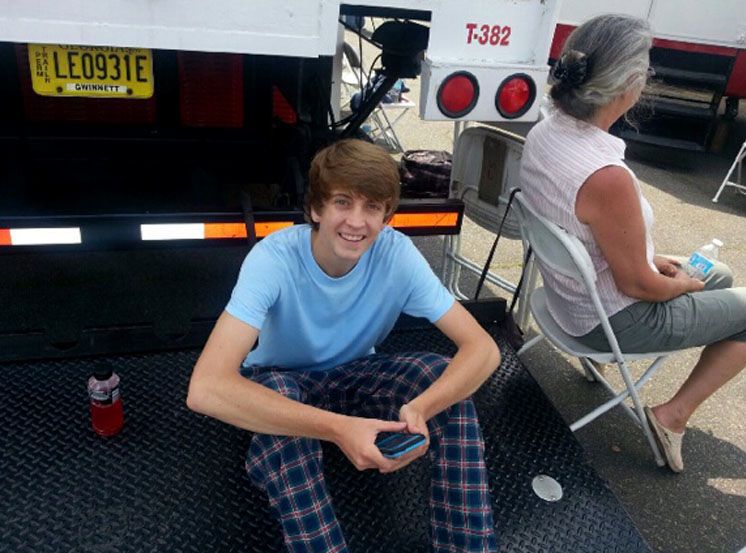 Gabe Peeler has spent the early part of his summer traveling and working throughout western North Carolina.
Six weeks ago, the 17-year-old received a phone call from a casting director who asked if he could be in Gastonia in a few days.
“It was a surprise. It was out of the blue,” Peeler said.
A rising senior at Carson High School, Peeler was cast as a photo double for a character in “Max,” an MGM movie about a soldier who is killed in Afghanistan and whose military dog is adopted by his grieving family.
Peeler has gone to Asheville, Kings Mountain, Gastonia and Crowders Mountain.
It’s not Peeler’s first work on a movie set; he was an extra in the first “Hunger Games” movie, which was also filmed in North Carolina.
Two years ago, Peeler, his mother, Sherry, and brothers were walking in Carolina Mall shopping for baseball cleats when they were approached by a casting director. The next thing they knew, the children were submitting their headshots and soon were on a set being fitted for costumes.
That same casting director called the family several weeks ago to discuss the “Max” role.
Gabe is a double for one of the main actors in the movie, Josh Wiggins. A newcomer to film, Wiggins has been billed as the next Leonardo DiCaprio. He was discovered on YouTube.
Peeler said he’s had interaction with not only Wiggins, but also many of the other key actors in the movie, who include Thomas Haden Church (“Spider-Man 3”) and Lauren Graham (“Gilmore Girls,” “Parenthood”).
The actors eat their meals together, Peeler said.
“We ride in the van from base camp to set,” he said.
He’s also worked with director Boaz Yakin, who directed “Remember the Titans.”
The director may test out lighting or interaction with a character using Peeler as a body double.
Also, Wiggins can only be used on set for a certain period of time because he is underage. Filling in for him, Peeler will read the lines with the other actors and will often be filmed from the back. He’s had to cut and put a rinse in his hair so it will match the actor’s hair. He undergoes hair and makeup just like Wiggins and has his own movie trailer.
“If you see the actor from behind, that’s likely Gabe,” said Dale, Peeler’s dad.
Peeler began shooting in mid-May. In the beginning, he didn’t know what he’d be doing.
“I knew it would be a movie or TV show, but then they just started calling me back,” he said.
He’s had to be on set as early as 5 a.m. and as late as 11 p.m., Peeler said.
After “Hunger Games,” Peeler and his other brothers were extras in a few episodes of the Showtime series, “Homeland.”
His younger brothers, Jace, 13, and Brayden, 11, are also extras on “Max.” Jace, Dale says, is the one who really wants to be an actor.
His father marvels at the places Gabe has been able to travel and the people he’s met.
“I think it’s been great for him,” Dale Peeler said.
Dale also said filming in North Carolina helps employ people locally.
“All you have to do is go on set and see how many people it affects,” he said.
The film crew shot footage Friday in Faith. Gabe told the director about the Faith Fourth of July parade, and they believe it will be a part of the movie.
Gabe isn’t sure if this has sparked the acting bug in him, but says if something comes from it, he’ll certainly take the chance.
“I’ve never really tried it. I thought about going to college and playing sports,” he said.
“You never know what will happen.”
His part of the filming will wrap up July 12, he said. Then he plans to work — possibly as an extra — on another movie being filmed in North Carolina called “Ashby.”
Contact reporter Shavonne Potts at 704-797-4253.