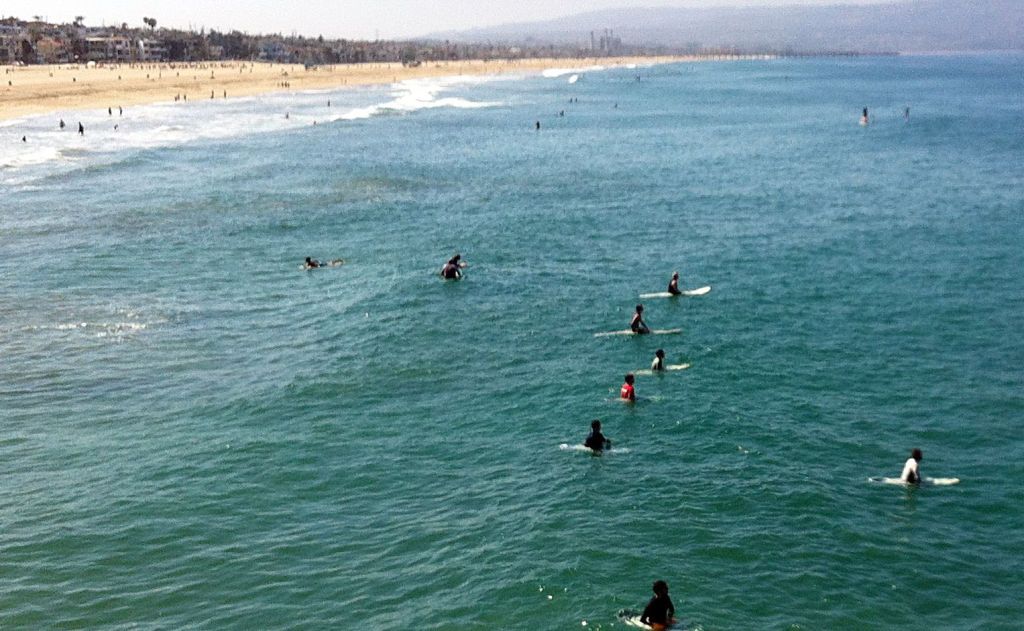 MANHATTAN BEACH, Calif. (AP) — Steven Robles was an hour into his regular weekend swim off some of Southern California’s most popular beaches when he came face-to-face with a great white shark.
The 7-foot-long juvenile had been trying to free itself from a fisherman’s hook for about half an hour.
“It came up to the surface, it looked at me and attacked me right on the side of my chest,” Robles told KABC-TV. “That all happened within two seconds, I saw the eyes of the shark as I was seeing it swim toward me. It lunged at my chest, and it locked into my chest.”
As a reflex, he tried to pry open the shark’s mouth.
“I was like, ‘Oh my God, this is it. Oh my God, I’m going to die. This is really, this is it,’ ” Robles told CNN.
And then, just as quickly as it struck, the shark let go and swam away.
Robles was familiar with the waters of the Southern California coast. His Saturday morning routine included a swim from Hermosa Beach north to Manhattan Beach with fellow amateur distance swimmers, and last summer he completed a difficult swim approximately 20 miles from Santa Catalina Island to the Rancho Palos Verdes peninsula to raise money for a school in Nicaragua.
Robles had been going for 2 miles with about a dozen friends Saturday when he encountered the shark around 9:30 a.m., fellow swimmer Nader Nejadhashemi said Sunday.
“He said ‘I’ve been bit,’ and he was screaming,” said Nejadhashemi, who didn’t see the shark even though he was just 5 feet away.
At first Nejadhashemi thought it must be a cramp. “Then,” he said, “I saw the blood.”
Nejadhashemi reached his friend and checked that “all his extremities were intact,” then comforted him as others in the group flagged a nearby paddle boarder.
“I don’t know how we managed to push him on the paddle board but we did,” he said. Once several surfers came over to help pull the board in, Robles was on his way to the shore, where paramedics treated his wounds.
He was taken to the hospital but by Sunday morning had been released. Robles did not return messages left Sunday at several numbers listed under his name.
The shark remained in the area for about 20 minutes and then disappeared into the murky water, said Rick Flores, a Los Angeles County Fire Department spokesman. The beaches — crowded for the warm holiday weekend — remained open, but a mile-long stretch was temporarily off-limits to swimmers. Police also prohibited fishing from the pier where the fisherman hooked the shark until Tuesday.
It’s illegal to fish for great white sharks. The fisherman told several local media that he was trying to catch a bat ray, not a shark, and that he didn’t cut the line sooner because of how many swimmers were in the water. It wasn’t immediately clear whether the wildlife officials were investigating; a department spokeswoman did not return calls seeking comment.
Shark sightings are on the rise at some Southern California beaches, especially in the waters off Manhattan Beach, which is a popular spot for surfers and paddle boarders but also has long been identified as a pupping ground for white sharks. A life-sized model of a white shark is displayed outside an aquarium on the pier, with an explanation that juvenile sharks are common in the area.
Shark attacks are rare. Since 1950, there have been 101 great white shark attacks on humans off California — 13 of them resulted in deaths, the state Department of Fish and Wildlife said.
Also Saturday morning, about 200 miles up the California coast, an unidentified shark bit a surfer’s board in the Pacific off Oceano. Teeth marks suggested the shark was about 8 feet.