Superintendent says high principal turnover a challenge and a gift 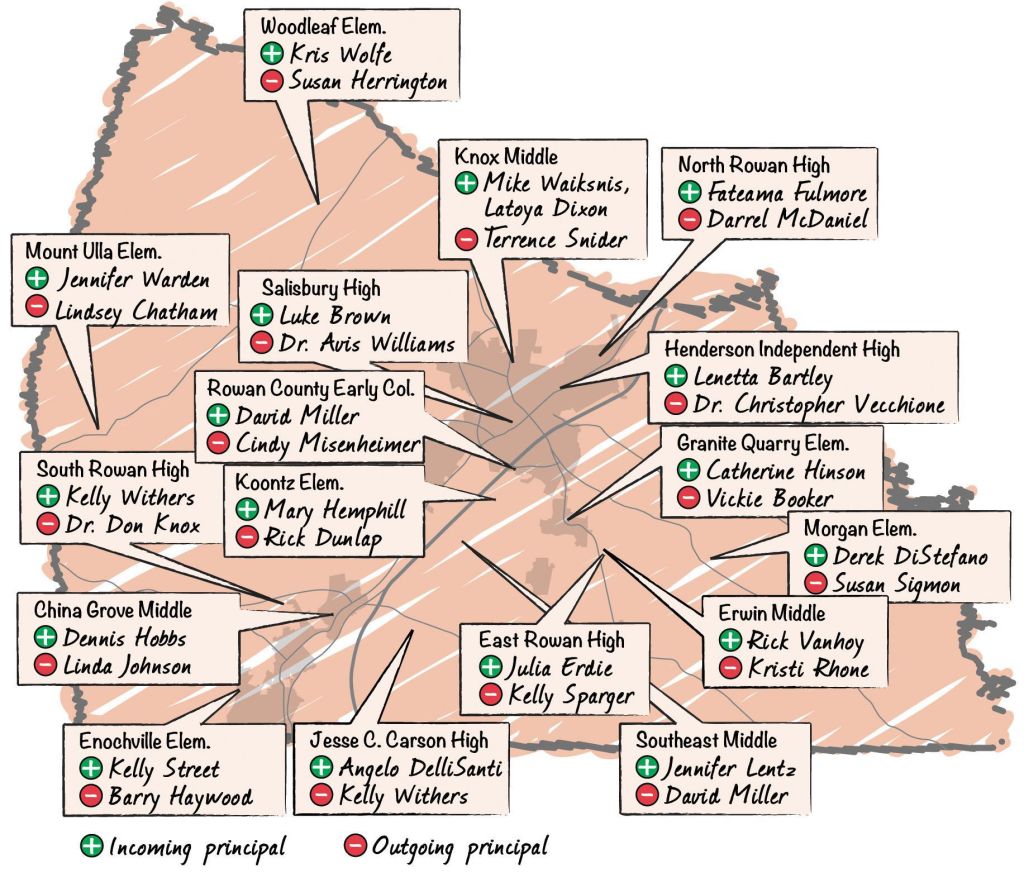 The Rowan-Salisbury School System’s principal turnover rate is high — nearly half of the district’s principals have been hired since July 1, 2013.
Seventeen of the district’s 35 schools have an administrator who’s been in their current position for one year or less.
Superintendent Dr. Lynn Moody said that number is high.
“I keep saying that’s one of our challenges and gifts,” she said.
“It’s probably at a higher rate than I wish it was,” Moody said, but it’s bringing a “unique opportunity” to the school system.
Since she took the helm of the district in October, Moody said she’s “hired a lot.”
“It’s good in that we’re building a new team, and it’s a highly energized team,” she added.
The principal positions at six schools have been filled since school let out for the summer, including South Rowan, Carson and North Rowan high schools; Mount Ulla and Woodleaf elementary schools and Knox Middle School.
Kelly Withers has transferred to South Rowan High School to replace Dr. Don Knox, and Angelo DelliSanti replaced Withers at Carson. DelliSanti came from an assistant principal position in the Mooresville Graded School District.
Fateama Fulmore, formerly an assistant principal in Cabarrus County, took the principal position at North Rowan High School, replacing Darrel McDaniel.
At Mount Ulla Elementary, former assistant principal Jennifer Warden took over as principal for Lindsey Chatham, and former Granite Quarry assistant principal Kris Wolfe took Susan Herrington’s position at Woodleaf Elementary.
Mike Waiksnis and Latoya Dixon joined Knox Middle School as a leadership team. The two left principal positions in the Rock Hill School District, where Moody used to be superintendent.
Waiksnis and Dixon were preceded by Terrence Snider, who left Knox in March.
Henderson Independent High School, Salisbury High School and Granite Quarry Elementary all got new principals in January.
Lenetta Bartley took over for Dr. Christopher Vecchione at Henderson. Bartley was an assistant principal North Rowan Middle School. Luke Brown came to Salisbury High School from Randolph County, where he was an assistant principal at Trinity High School. Catherine Hinson became principal of Granite Quarry Elementary School.
In 2013, seven principals were hired July 1 and one was hired Aug. 1 to fill positions at Enochville, Morgan and Koontz elementary schools; Erwin, Southeast and China Grove middle schools; Rowan County Early College and East Rowan High School.
Kelly Street transitioned from assistant principal to principal of Enochville Elementary School, replacing Barry Haywood, and Derek DiStefano took Susan Sigmon’s role as principal at Morgan Elementary. Mary Hemphill took over for Rick Dunlap at Koontz.
Rick Vanhoy replaced Kristi Rhone as principal of Erwin Middle School, and Dennis Hobbs took Linda Johnson’s position at China Grove Middle. Jennifer Lentz took David Miller’s position at Southeast. All three transferred from different positions in the school system.
Miller transferred to the Rowan County Early College from Southeast, taking over for Cindy Misenheimer, and Julia Erdie, a Cabarrus County assistant principal, became principal of East Rowan High School, filling Kelly Sparger’s role.
Of the principals who left since July 2013, nine retired, three resigned and five transferred to other positions in the Rowan-Salisbury School System.
Herrington, Knox, Vicki Booker, Johnson, Sparger, Haywood, Misenheimer and Sigmon retired. McDaniel also retired, but took a position as a principal in Georgia as well.
“If you look at the reasons they’re leaving, it’s mainly retirement,” Moody said.
Although she said she doesn’t know why so many principals left in such a short amount of time, Moody said many people chose not to retire during the financial downturn. Now that the economy has slightly improved, some of those who originally held out are now retiring.
Chatham, Vecchione and Williams resigned. Chatham left to move closer to family with health issues, and Williams accepted a promotion with Guilford County Schools. Rowan-Salisbury human relations did not report why Vecchione resigned.
Five principals transferred to other positions in the Rowan-Salisbury School System.
Snider transferred from the principal position at Knox Middle School to an assistant principal position at North Rowan. Dunlap made the move from principal at Koontz to assistant principal at Southeast.
Miller and Withers also transitioned from one school to another. However, they kept their positions as principal.
Rhone made a move to the district’s central office, taking the human relations director position.
“It’s exciting to build this new team,” Moody said, but added that it’s “important to keep the team together long enough to gain some momentum.”
When Moody hires, she looks for potential employees with energy, execution and diversity.
“I think it’s very important we have diversity,” she said, adding that she’s made a conscious effort to hire men and women of a variety of ages and ethnicities from inside and outside of the district.
Many of the applicants are very intelligent and know all the right answers, Moody explained, but she added that it’s especially important to do a “thorough check of their references to see what they’ve actually done.”
One of the district’s goals outlined in its new strategic plan is to decrease staff turnover to less than 10 percent by the year 2017.
Moody said the district is putting together a design committee to work on recruitment, induction and retention.
“Retention is very important because it is very expensive to hire new people,” she said.
Moody said she hopes to use professional development to encourage principal retention, as well as giving them opportunities to work and create and feel valued. “I’ll continue to look at ways to invest in them as leaders,” Moody said.