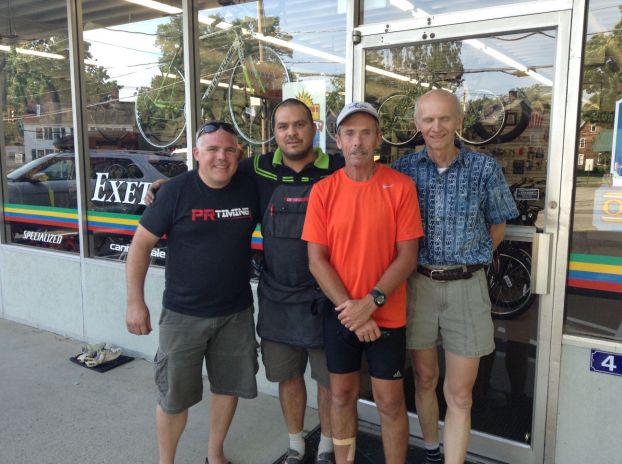 It seems like this morning’s ride started about yesterday sometime. So much happened today. The challenge is to remember everything.
I started off this morning going out the door about 6:30. It had rained hard all night and was still raining when I left. That is the main reason I stayed in a motel last night. Places around me got about 2.5 inches of rain. It was a little breezy too. As I have said before, I like riding in the rain just fine unless it is cold.
One of the first stops was Kennebunk. It is one of the oldest towns in the country. Never heard a word from the Bush family that hangs out in Kennebunkport. I was on Highway 1 again this morning and rode on south to Wells and Moody Beach. Maine doesn’t have these long beautiful beaches like we do, but this one is very nice.
Traffic was horrendous. People were waiting a long time to be able to turn down the few access roads to the beach. I didn’t have to wait and just rode right on past them. I was taking pictures of the traffic line and one family asked me to take a photo of them while they waited.
The next stop of significance was Kittery, Maine, and New Hampshire. It has some of both. I stopped and asked directions from an old grouch at Walsh Furniture who hated the fact that I walked in his store. He was probably bothered that I was not going to buy anything.
I rode on and crossed the bridge that the grouch told me to, but saw no sign about entering New Hampshire. I thought I must have missed it and rode back across, just as they were going to raise the drawbridge to let a boat pass. Turns out that there is not a sign on that bridge, but Melissa Baker helped me out with directions to another bridge that did have the sign. So I backtracked and lost a little time. Turns out that would be the theme for the rest of the afternoon.
The hills were starting to lessen a little, but a swirling wind kept me guessing. When it blew as a headwind, I could just feel it pushing back. Same as in Kansas last year. Most of the time, it flew by as a sidewind.
The next major stop was Exeter, N.H. I will forever remember stopping there. It was another beautiful town with a bandshell right in the center of town.
As I rode into town, I could hear young girls screaming. It kept up for several minutes, and when I got close to the van, I thought the girls were saying, “Mr. Freeze! Mr. Freeze!” Just as I got even with them, the woman driving rolled down her window and said, “They say they know you!” I pulled off the side of the road, hoping they would come back, but they didn’t. I couldn’t see the girls in the back, so I hope someone will tell me who they were.
While I was pulled over, it was a good time to check my maps. Once that was accomplished, it was time to start riding. I still had 28 miles to make it to Wyndham, N.H., to spend the night.
I jumped back on the bike, started to peddle, and nothing happened. My back tire was totally flat. Something seemed wrong with the brakes too, since the back tire didn’t want to turn. This was more than I knew how to fix, but it just so happened that Exeter has a great bike shop. I called, and they sent a truck to pick me and the bike up.
The driver, Devan Harris — who is really a sales rep — picked me up. He knew about my book, and he had a friend who has a signed copy. That was pretty amazing. Billy Hagerty, the service manager, jumped right into working on my bike. He did a great job, giving it a once over.
Back on the road about 5 p.m., I still had 28 miles to go. To start with, I turned the wrong way and wasted more time. The hills were bad heading out of town, so I said a little prayer that I needed help. God gave me more reasonable roads right after that. Next problem was that it was getting dark, not safe to ride. I got another intervention, a separate lane for me to ride in.
I pulled into Wyndham amid fireworks going off all around. Finally, I saw the motel. I had been rushing so much that I had no real food. Powerbars and a big oatmeal raisin cookie did the trick. Tomorrow, I will load up my bags at one of the great Hannaford’s stores.
A big shout goes to Andrew and Browyn, who took time to fill my water bottle and help with directions. Yes, I did make it. After dark, but safe.
All day yesterday I looked for places for shelter, just in case the rains came very hard and I had to do some stealth camping. Today, I was just amazed at all the good people and magical scenery.
After 101 long miles, a bike repair stop and lots more fun, I am spending the night in West Wyndham, N.H. I will have a shot of getting close to Massachusetts tomorrow. It is supposed to be a beautiful day.
Rowan County resident David Freeze is cycling from Bar Harbor, Maine, to Key West, Fla.