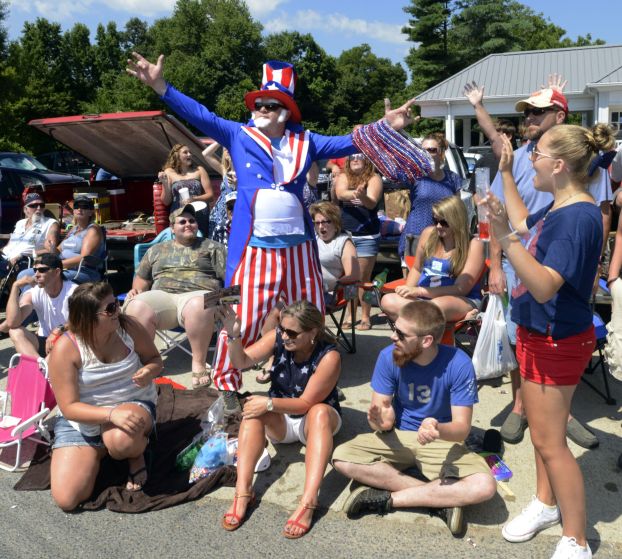 In Faith on the 4th, patriotism and fun begin with parade

FAITH — There might’ve been a hurricane turning somewhere off shore.
On the streets of Faith on Independence Day, the sun was shining, there was a little bit of a breeze and the air was warm, but not sweltering.
And the crowd to watch the annual Faith Fourth of July parade could have set a record, according to one organizer.
Randall Barger said he didn’t have an estimate, “but it was more than I’ve ever seen,” he said. “Downtown was just thick, and even on both ends of the town was a lot of people.”
Tradition is big, as ever. People stake out prime parade­-watching spots the night before.
Tim Vanhoose said he and daughters Heather and Brittany parked their pickup at 8:15 a.m.
He and Heather sat up in the truck for a bird’s­eye view of the parade, while Brittany scouted for candy at the curb.
“I like watching all of it, especially the veterans,” Tim Vanhoose said.
Not long after he finished speaking, a ripple of cheers and applause washed down the street.
Members of the Rowan County Veterans Honor Guard marched by, carrying the colors.
People stood, clapped and cheered as they passed, followed by other trucks and floats carrying veterans.
“Thank you for your service!” one man shouted as the honor guard passed.
Ron Magnuson, known to many from his years as Salisbury bureau reporter and morning anchor for WSOC­TV, was in the crowd with his wife, Andrea, and their son Malachi, 2.
“This is (Malachi’s) first time actually being able to enjoy it,” Andrea said, as the boy pointed and clapped while camoflage­-painted military trucks rolled by, carrying veterans.
Magnuson himself served in the Army National Guard from 1989 to 1992, as a transportation specialist.
Andrea said being able to celebrate together as a family was a great experience. “Just to be able to live in this country, and celebrate freedom, where everybody is coming together as one,” she said.
“The patriotic aspect of it” was Matt Drechsler’s main reason why he said he liked watching the Faith Fourth parade.
But there’s no denying it’s a lot of fun, in general, to sit outside and see the floats, and the people, go by.
Friends and relatives of Richard Collins’ family watched the floats and festivities from the porch of the Collins home.
Some of them are originally from Woodleaf and Cleveland, Zack Myers said.
When a float passed filled with dancers in tomato costumes, promoting the Woodleaf Tomato Festival, they shouted out into the yard: “That’s your family!”
Myers said celebrating independence is key, but he enjoys it all — “The girls, the politics, the whole atmosphere,” Myers said.
For Collins, Faith Fourth is more than a tradition.
“I’m fixing to be 50,” Collins said. “We enjoy it … We get to see our friends, people we haven’t seen in a year.”
And Collins, too, said he thought the parade was bigger this year — definitely “about 30 minutes longer” than the parades he remembers from his youth, he said.
As the East Rowan High School marching band passed, playing “America the Beautiful,” Collins said he was ready for the rest of Independence Day: cookers out back, getting barbecued chicken ready for dinner.
From a costumed Lone Ranger and Tonto dancing on top of the Booger Woods car, to a float carrying World War II veterans and a simulated torpedo, there was a wide variety of floats.
Judges named that Woodleaf Tomato Festival entry the most unique float.
Focused on a Cure won the Best Amateur Float award.
There were a total of 144 entries in this year’s parade, according to organizer Laura Evans.
Churches, politicians and community groups rounded out the field of entries that included political action group La Resistance, with trademark red berets.
And, along with the Comic Monstore entry, a bevy of costumed characters.
At one point, Captain America went skipping down the street with a young lady, while “Star Wars” storm troopers and a light saber-­wielding Sith Lord followed.
As the sun shone down, “Y’all look hot!” shouted one man from the back of a truck carrying members of Ecclesia Church. “Who wants to get sprayed?”
Members fired water guns into the air, as some spectators took cover.
Barger said the weather was hot all week, “but we’ve had good crowds all week long” at the Faith Fourth festival.
“We’ve been able to sell a lot of food, a lot of rides. It’s been a good week.”
The Faith Fourth festivities continue today, with rides open from 1 to 5 p.m. and reopening at 6 p.m. The Southern Breeze Band performs at 7 p.m.
Contact Hugh Fisher via the editor’s desk at 704­797­4244.