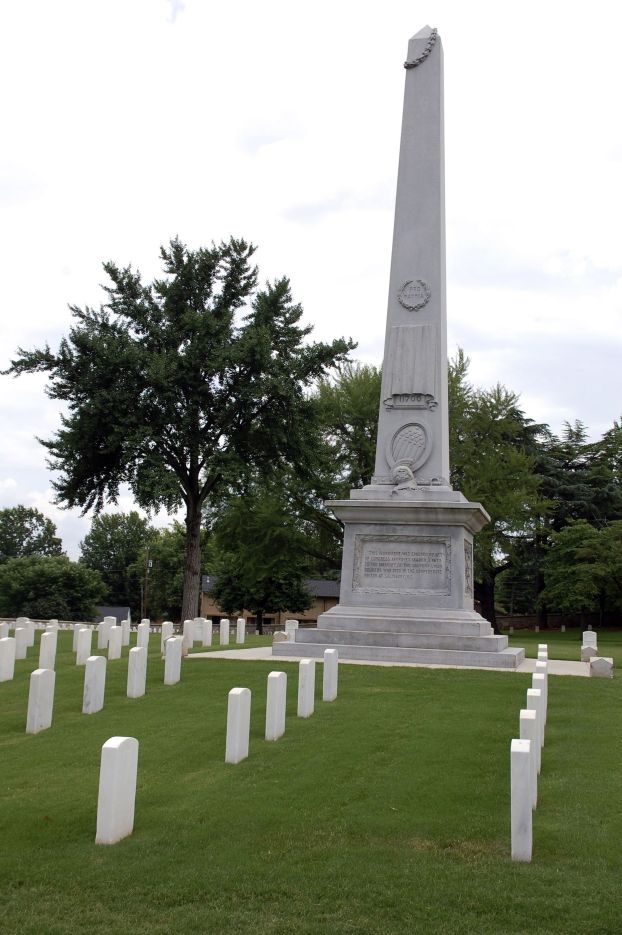 SALISBURY — It is parts irritation, aggravation and exaggeration.
For several years now, Civil War historians and the Department of Veterans Affairs have acknowledged that the number — 11,700 — inscribed on a Salisbury National Cemetery monument to signify Union dead from the Salisbury Confederate Prison is way off.
The number is probably about 8,000 too high.
But the monument also was meant as a memorial to unknown Union soldiers whose graves were never marked, because at their deaths from disease and starvation in late 1864 and early 1865, they were buried in trenches in a cornfield close to the prison.
Mark Hughes, a Kings Mountain author of five books and recognized for his knowledge of Civil War cemeteries, contends the Union dead are not unknown.
For that reason, Hughes has waged a long, personal campaign asking the Department of Veterans Affairs to mark the graves of more than 3,500 American soldiers from the Civil War who are buried at the Salisbury National Cemetery.
Sue Curtis, president of the Salisbury Confederate Prison Association, agrees the number on the monument is “highly inflated.”
Curtis and her husband, Ed, are arguably the foremost authorities on the Salisbury Confederate Prison, but they caution how difficult it is to offer a specific number of the Union dead at the cemetery. (See other story on 1A.)
The Curtises generally support the findings of late author Louis A. Brown, who wrote “The Salisbury Prison, a Case Study of Confederate Military Prisons 1861-65,” which contains a listing of 3,800-plus deaths in the Salisbury Prison. Brown relied on a variety of sources.
Likewise, Hughes says, the VA could depend on an 1868 “Roll of Honor,” a register from the Salisbury Confederate Prison’s hospital and published reports of the Salisbury Prison war dead from the New York Tribune to verify the names of 95 percent of the Union soldiers buried in Salisbury.
“I can’t come up with any conceivable reason why they won’t mark those,” Hughes says. “… Let’s face it, these are American soldiers. They died fighting for their country.”
Hughes says federal law requires the marking of the graves for any individual buried in a national cemetery and that provision extends to soldiers of the Union and Confederate armies of the Civil War.
ggg

The U.S. government created the national cemetery system as a result of the Civil War, and the Salisbury National Cemetery off Railroad Street was established in the 1870s because of the thousands of Union soldiers who died at the prison.
National cemetery sites often were chosen where fallen troops had been concentrated — places such as camps, hospitals, battlefields, railroad hubs and, as in Salisbury’s case, prisons.
By 1872, 74 national cemeteries and several soldier lots had been established and contained the remains of 305,492 soldiers, of which 45 percent were unknown.
Through the years, Hughes has had a running dialogue with the VA, making five different requests for the “unknown” soldiers’ graves in Salisbury to be marked with names and for the “11,700” number to be corrected.
It has led to the VA’s saying that the 38-foot high National Cemetery monument — authorized by Congress in 1873 and installed in 1875 — is historic in its own right and will not be changed.
The VA also has no intentions of marking individual grave sites for the Union soldiers who died at the prison. In 2010, a VA under secretary said it would be inappropriate to affix bronze plaques on or near the existing monument.
As a significant concession in December 2009, the VA erected an interpretive panel near the unknown soldiers monument at the cemetery, and it was dedicated in February 2010.
It cited the discrepancies between the 11,700 number on the monument and what other records have shown over the years. It also raised questions about the actual number of burial trenches, noting numbers have ranged from 13 to 18. (See sidebar on 1A.)
In recent years, Hughes has corresponded with Steve L. Muro, the recently retired under secretary for memorial affairs with the VA.
“Although VA is statutorily required to mark grave sites in national cemeteries,” Muro told Hughes in June, “we cannot grant your request to provide a headstone or marker at SNC (Salisbury National Cemetery) because we cannot determine with certainty who is interred in the trench burial site.”
In his letter, Muro acknowledged “it has become clear over time that the number of dead inscribed in the monument is not accurate.
“However, because the intent of the monument was to honor the memory of those buried at the site, regardless of the number,” Muro said, “VA finds that the existing monument at SNC appropriately marks the site and that we need not provide additional memorialization.”
Muro said the VA will not provide any additional burial headstones or markers for the trench burial site — an open, grassy area extending just behind the monument. A line of “Unknown Soldier” headstones mark the end of trenches today.
Rather, the VA’s National Cemetery Administration is transcribing the Roll of Honor listing 3,504 individuals who died at the Salisbury Prison and who may be buried in the trenches.
Muro said that list will be publicly accessible on the National Cemetery Administration’s website and on web pages for the Salisbury National Cemetery.
The list of names also will be made available at the cemetery, Muro said.
“We’ve gone round and round for 14 years,” Hughes says. “Their new story is that the ‘unknown’ marker adequately marks the graves.”
ggg

Hughes doesn’t expect the National Cemetery to install separate white markers for every individual who can be identified as having been buried in the trenches.
But he cites precedence and thinks a separate memorial with all the verified names should be installed at the cemetery.
“It’s probably the last cemetery where this can be done where we can correct history,” Hughes says. “… I can’t come up with any conceivable reason why they won’t mark those.”
Hughes says he receives calls on a regular basis from descendants of the Union dead interred in Salisbury who can’t believe their ancestors’ names are not noted at the cemetery.
Where did the “11,700” number originate and why is it so far off?
From what Hughes and other historians have turned up, it looks as though the number originated from two visits done by Brevet Major Gen. L. Thomas, then inspector of national cemeteries.
Thomas inspected the Salisbury burial site twice — once on Oct. 24, 1867, and again Nov. 1, 1868. Each time he opened a trench to ascertain whether the bodies were buried in coffins, but most of them were not.
It’s thought Thomas made a guess of how many bodies were in all the trenches based on his inspections of the two he opened. By 1869, he reported, “it is estimated 11,700” were interred in the trenches.
But Thomas’ numbers don’t coincide with earlier reports and inspections; Here’s some of the timeline, based on Hughes’ research:
• Feb. 17, 1865 — Inspector Gen. T.W. Hall visited the prison. He reported 10,321 prisoners were received between Oct. 5, 1864, and the day of his inspection.
During that period, 2,918 prisoners died in the hospital, Hughes said, citing Hall’s report. “Hall also reports the burial sergeant buried 3,479 prisoners between Oct. 21, 1864, and Feb. 17, 1865,” Hughes says.
• Feb. 22, 1865 — The surviving prisoners were marched out of the Salisbury prison on their way to an eventual prisoner exchange.
• July 24, 1867 — Brevet Brig. Gen. J.J. Dana of the Quartermaster Corps reported that 3,501 known and three unknown soldiers were buried at Salisbury.
• Feb. 20, 1868 — the Quartermaster General publishes Vol. 14 of the Role of Honor series, which lists 3,501 names, plus three unknown soldiers, who were buried at Salisbury.
The title page of that volume says, “Names of Soldiers Who in the Defence (sic) of the American Union Suffered Martyrdom in the Prison Pens throughout the South.”
• 1868 — The inspector of national cemeteries, Brevet Col. C.W. Folsom, reports “9,000 to 10,000 confined” at Salisbury and “5,000 fell victim.” But Hughes says a printed report also claimed that 18 trenches in the cemetery contained “the bodies of about 12,000 Union soldiers.”
In 1994, Hughes says, he located Folsom’s original report at the National Archives. “Someone in the Quartermaster Department had changed Folsom’s report,” Hughes says.
“Folsom reported 5,000 deaths. The ‘5,000’ was struck out and changed to ‘12,000.’ Folsom reported 13 trenches. The ‘13’ was struck out and ‘18’ trenches was inserted.”
Hughes has photo copies of the striking out on Folsom’s report.
• 1869 — This is when Thomas first used the 11,700 number in a report, probably based on his extrapolations from opening up two trenches.
• 1871 — The inspector of national cemeteries, Col. Oscar Mack, said there were no records for Salisbury and that the number was “estimated from the number of bodies exhumed from a given space.”
From that point on, Hughes contends, the War Department had its “cover story,” though Brown, Hughes and other researchers found evidence of the lower, more accurate numbers in the National Archives and Library of Congress.
Congress acted on March 3, 1873, to erect “a suitable granite monument to the memory of the 12,000 Union soldiers who died in the prison-pen,” according to records.
The cost of the monument was $10,000. The states of Maine (1908) and Pennsylvania (1910) also erected monuments in the Salisbury National Cemetery to honor their native sons who died in Salisbury.
An inscription on the original monument with the “11,700” number dedicates the stone “to the memory of the unknown Union soldiers who died in the Confederate Prison at Salisbury, N.C.”
Again, Hughes wants the VA to acknowledge in the cemetery somewhere that they are not unknown men, but American soldiers — with names.