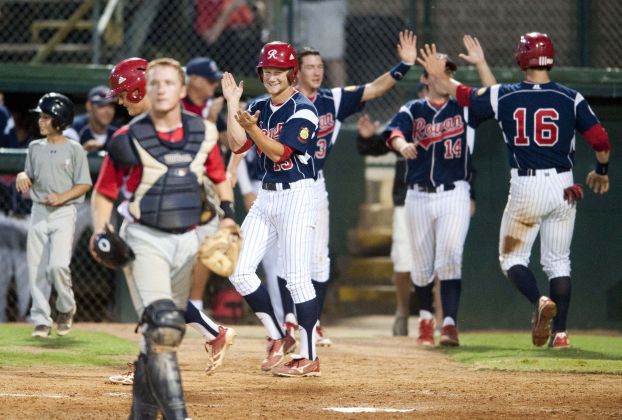 SALISBURY — Rowan County third baseman Riley Myers was at the ballpark early on Friday taking extra groundballs because when you’re playing with a partially torn ligament in your throwing elbow, you need every edge you can get.
Baseball can be a cruel game, and two errant throws by Myers put Rowan in a 2-0 hole against Concord at Newman Park. But baseball also can be a cool game. It was Myers who keyed a Rowan comeback that ended with a stunning 12-2, 10-run-rule victory.
“That was about as strange as a game can get,” said Rowan coach Jim Gantt, after his team took a 2-1 lead in this drawn-out, twice-postponed, best-of-five series. “We didn’t play any defense early and Riley just didn’t follow through on two throws on plays that he can make. But our pitchers (Hunter Shepherd and Cory Fries) did a great job, and then guys came through with big hits.”
Rowan’s last 10 runs came on two-out hits. With two out and nobody on in the bottom of the seventh and leading only 5-2, eight straight Rowan hitters reached safetly to plate seven sudden runs. Luke Setzer’s two-run single sent fans — who had been biting their fingernails and pleading desperately with umpires 10 minutes prior to that explosion — home early.
Shepherd pitched brilliantly for Rowan for six innings, and left fielder Dustin Ritchie helped him out by making throws home to Michael Pinkston, who tagged out runners at the plate to end Concord’s third and fourth innings. Concord tried to score on a two-out single in the third and on a flyball to medium left in the fourth.
“Those were two great plays,” Shepherd said. “They were a big help. They kept us close until the bats came alive.”
Mostly, Shepherd, a homeschooler who is rising junior, kept Rowan close.
“His command of his off-speed pitches was really unbelievable,” Concord coach Tommy Small said. “We had runners at second and third a couple of times, but he always made a pitch.”
Shepherd struck out eight, which is a lot for the young southpaw. Pinkston helped him behind the plate, and Shepherd threw enough fastballs to keep Concord hitters guessing.
“My curveball and changeup were pretty good,” Shepherd said. “And I was spotting the fastball.”
Concord hurler Jesse Klepper was outstanding early and got help from a diving catcher by center fielder Garrett Freeze. Klepper took a 2-0 lead to the bottom of the fifth.
Michael Caldwell led off the Rowan fifth with a solid single and was racing home moments later when Myers whipped a double into the left-field corner to finally put Rowan on the board.
“Sure, I wanted to make up for the errors,” Myers said. “I’ve pitched, and it used to just tear me up when guys made errors behind me. I didn’t feel bad for myself about the errors, but I felt bad for Shepherd because I’d let him and the team down.”
After Chance Bowden singled Myers to third, he scored for a 2-all tie on Luke Setzer’s flyball to deep center.
Then Shepherd struck out the side in the Concord sixth.
“We started getting some momentum,” Gantt said. “Then things started going our way.”
The bottom of the sixth was pivotal. Rowan had two out and two on when Caldwell singled home Ritchie with the go-ahead run. Myers was next.
“I thought we had Myers struck out,” Small said. “I was so sure we had him struck out that I came running out of the dugout, but we didn’t get that pitch. A great hitter got a second chance and he made the most of it. Myers scorches one up the middle, and Rowan’s up 5-2 instead of 3-2. That swing changed a lot for us. Then the floodgates opened up.”
Fries pitched the seventh for Rowan when it was still tight and earned a save. He allowed a two-out single, but Caldwell, the second baseman, ended the inning with a leaping catch of a line drive.
Concord reliever Nelson Bradshaw started the bottom of the seventh by striking out two good hitters, but a single by Ritchie started an avalanche. Heath Mitchem singled. Then Pinkston singled home Ritchie. Jeremy Simpson plated two runs with a hit that chalked the left-field line, and it was 8-2. When Caldwell was hit by a pitch and Myers walked, Rowan had the bases loaded. Bowden singled home two runs. Then Setzer drove home two more with a whistling liner to right-center — and Rowan fans celebrated.
“To know you can hit like that as a team with two outs is a big confidence-booster,” Myers said. “If we hit, we’re going to be all right.”
Rowan had 17 hits, wth Bowden and Pinkston getting three each. Caldwell, Myers, Setzer and Ritchie had two apiece. It could be either a short day or a marathon today. Rowan plays at Concord at 11 a.m. — yes, 11 a.m. — in Game 4. Rowan can clinch the series there, but if Concord stays alive, the teams would return to Newman Park for a decisive Game 5 tonight at 7 p.m. Brandon White is the likely hurler for Rowan (19-6) in Game 4. Kaleb Measimer is the probable starter for Concord (9-14).

CONCORD — The good news — the only good news — was that power was restored at Newman Park at... read more