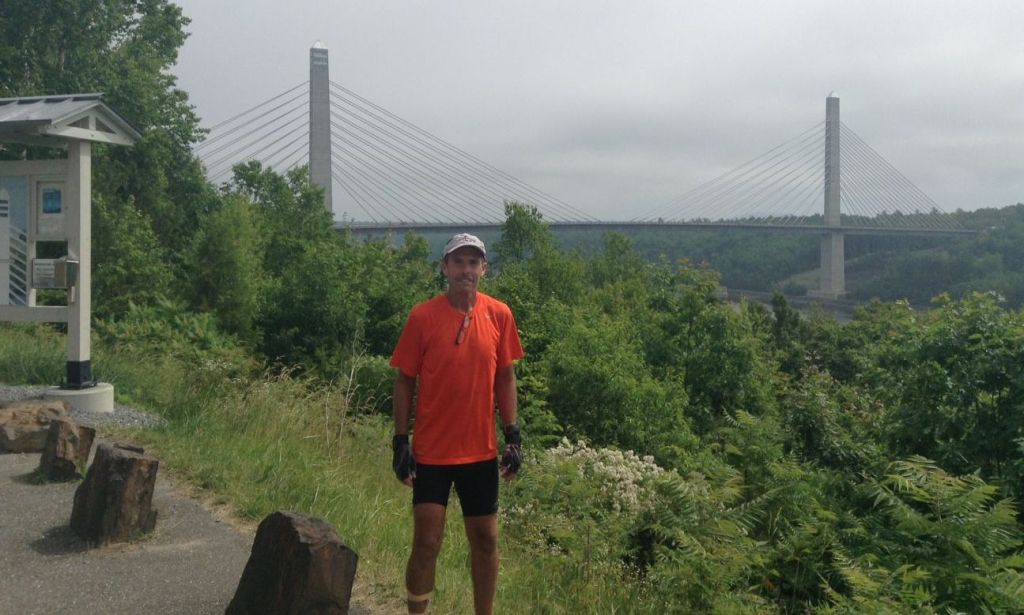 When I woke up this morning, there was a fairly thick fog. Major storms had occurred in the Ellsworth, Maine, overnight. None hit where I was, but the TV news was full of all the damage and a few lightning injuries. More was predicted for today, but it looks like I have missed them.
Just one more thing from last night that was a little humorous. One of the things that I hate to do is to have to get back on the bike to ride for something to eat. Especially if it involves riding just one more hill. There was a dairy bar/food place about a half mile from the Knight’s Inn where I spent the night. I rode down there to find no less than 40 people waiting to order, most coming from a car show next door. I gave it up, rode back up the hill, and had a supper of fig newtons.
I began the day feeling petty good, refreshed from a more normal night’s sleep. I didn’t hit the road until 7 a.m., but left Ellsworth and headed toward towns like East Orland and Bucksport. Bucksport had an amazing bridge, styled something like Charleston’s Cooper River Bridge. There is also a Revolutionary War fort close by. The Americans took a resounding defeat when they tried to attack this fort. Very old and very new were less than a half mile apart.
On then to Stockton Springs which advertised a lighthouse. I rode into the beautiful little historic town and was told that the lighthouse was still at least four miles away. That was too far for me to take the time, though I did spend lots of time sightseeing during the day. More towns like Searsport, Belfast, and Camden had lots of New England style photo opportunities.
I continue to be amazed at how car drivers don’t really know how far things are.
Yesterday I was told that Ellsworth was 45 miles from Machias, turned out it was 65. That is a big difference on a bike. Today a convenience store clerk told me that a certain motel was about 3 miles away, then she said “if you are on a bike it might be more.” She was right, since I was on a bike, it was 7 miles. Once again a long ways on a bike.
Today’s total ride was 84 miles. I was really happy with that. I am spending the night in an older motel called the Yankee Traveler about six miles south of Warren, Maine.
So far, so good.
The big concern among the locals is Hurricane Arthur coming up the coast. I plan to get out and ride for as long as I can. Riding in the rain is fine and I have done plenty of that. Rain with a fierce headwind will be tough.
Local Fourth of July celebrations are being changed, as are fireworks shows. At least for the Maine coast, the hurricane is supposed to move through quickly.
I am going to spend a little time planning tonight. Looks like a couple more days in Maine, then on to New Hampshire. I have never been there either, but am looking forward to it.
Still nothing from the Bush family on any kind of plans for my visit. I hope to hear from them soon.