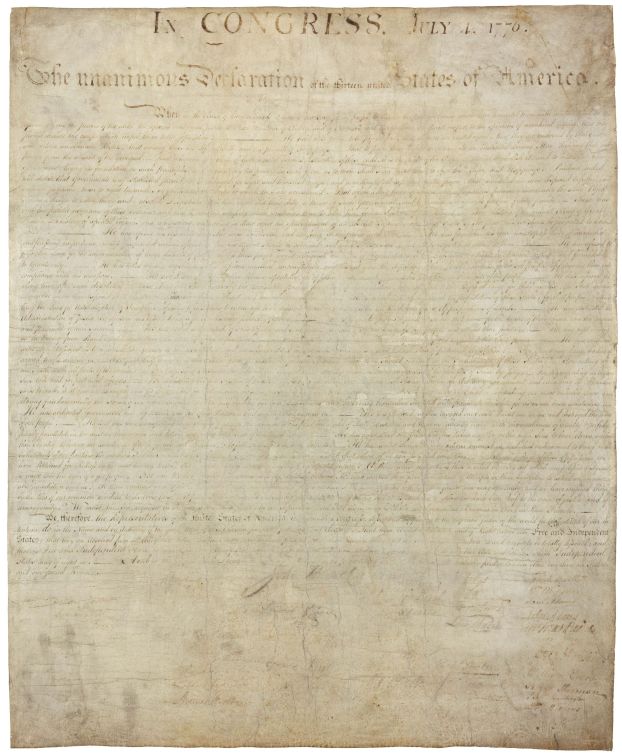 10 things you should know about the Declaration of Independence

1. Location: The original document, badly faded, is exhibited in the Rotunda for the Charters of Freedom, found in the National Archives Building in Washington, D.C. Also displayed there are the Constitution of the United States and the Bill of Rights.

2. Size: The parchment document measures 293/4 inches by 241/2 inches. By comparison, a page of the Salisbury Post measures 22 inches by 12 inches.

3. Flip side: On the back, at the bottom, upside-down is simply written: “Original Declaration of Independence / dated 4th July 1776.” Regarding the message on the back, according to the National Archives, “While no one knows for certain who wrote it, it is known that early in its life, the large parchment document was rolled up for storage. So, it is likely that the notation was added simply as a label.”

4. Slaves: Originally, many delegates wanted slavery to be listed among their grievances with the king of England. Here’s how Thomas Jefferson explained the eventual omission: “The clause too, reprobating the enslaving the inhabitants of Africa, was struck out in complaisance to South Carolina and Georgia, who had never attempted to restrain the importation of slaves, and who on the contrary still wished to continue it. Our northern brethren also I believe felt a little tender under those censures; for tho’ their people have very few slaves themselves yet they had been pretty considerable carriers of them to others.”

5. N.C. signers: The three delegates who signed the declaration on North Carolina’s behalf were not native to the state. William Hooper, a Wilmington lawyer, was born in Massachusetts and graduated from Harvard. Joseph Hewes, who amassed a fortune in the shipping business, also in Wilmington, was a Princeton-educated native of New Jersey. John Penn, a Granville County lawyer, was born in Virginia and had lived in North Carolina only two years.

6. USA: Though the document refers to “the thirteen united States of America,” the Declaration of Independence did not establish the colonies as a nation. The United States of America actually came into being on March 1, 1781, when the Second Continental Congress ratified the Articles of Confederation.

7. Committee dropout: The committee appointed by the Second Continental Congress to draft the declaration consisted of Thomas Jefferson, John Adams, Benjamin Franklin, Robert Livingston and Roger Sherman. Instead of signing the document, Livingston urged postponement, possibly because New York had not authorized its delegates to vote for independence. He was later elected chancellor of New York and in 1789 administered the presidential oath of office to George Washington.

8. Secret: The names of the signers of the Declaration of Independence were withheld from the public for several months to protect the signers from British reprisal. According to the National Archives. Congress ordered on Jan. 18, 1777, that “an authentic copy of the Declaration of Independency, with the names of the members of Congress subscribing to the same, be sent to each of the United States, and that they be desired to have the same put upon record.”

9. Earlier resolves: Rowan County adopted a set of resolutions on Aug. 8, 1774, that also addressed common rights and liberties and contained, as one historian noted, “the germs of independence.” The resolves asserted that the cause of Boston, whose port was closed and government suspended following the Boston Tea Party, was the cause of all. Rowan declared it to be “the duty and interest of all the American Colonies, firmly to unite in an indissoluable union and association.” Perhaps the most significant article in the resolutions was the recommendation that the African Slave trade be abolished.